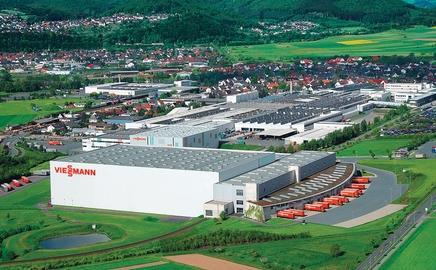 Founded in Germany in 1970, heating specialist Viessmann had a turnover of *1.4 billion in 2005 and now employs over 7,000 people worldwide. Based in Telford, its expanding UK business, which has been trading since 1989, has more than 70 employees. Later this year the company will introduce cooling systems to the UK.

Graham Blandford, the firm’s UK marketing director, talks to Building about supplying systems to heat domestic, commercial and industrial buildings in a changing market affected by legislation and green issues.

There are three main sectors: domestic buildings that use boilers, which mainly run on oil and gas, but can also use liquified petroleum gas; commercial and industrial boilers, which have outputs ranging from 35kW to 23MW and can run on all fuel types; and we also supply renewable products, such as solar thermal technology, photovoltaics (PV), ground, water and air-sourced heat pumps – which will soon incorporate active cooling – and biomass boilers.

Which projects have used your products?

Terry Farrell’s Green Building in Manchester’s Macintosh Village, a mixture of flats and offices, uses one of our integrated heating and hot water systems.

At the Petans training centre near Norwich, we launched a solar thermal system to heat the 419m3 swimming pool, using 86 solar panels and 860 tubes, which replaced the original oil-fuelled system.

What impact are regulations having on your market and products?

Legislative changes are most applicable to the commercial and industrial sectors, although consumer awareness and rising fossil fuel prices are also important factors in changing attitudes across the board. More of our products are being specified as parts of integrated systems, which can be more efficient than stand-alone items. And since 2004, all our boilers have been condensing.

The Building Regulations now insist on greater energy efficiency than ever before, so using renewable sources is driving the direction of the market. Vitosol, our range of solar thermal products, is therefore getting high traction. It’s our star and is showing the biggest growth, although all our market sectors are busy.

Who has the most input into the specification?

In the past, it was clear cut: an architect or M&E engineer would specify “product X or equivalent”, so contractors dominated. Now, however, there is more input from other parties – vendors, end users and clients all have a bigger say. Also, consultant engineers have become much more specific. Although it is not possible to say which group has most influence – there’s an element of management by committee – architects now have a big say because, over the last 18 months or so, they have become more aware and involved with all the issues.

What factors have had the biggest impact on product development?

There is no individual driver, as our range is so large. Our boilers, for example, are being developed to run on different qualities of gas, given the number of suppliers other than those from the North Sea. But the drivers for other technologies – PV, solar thermal and biomass – are as diverse as the technologies themselves.

What are your lead times?

As the domestic market is driven by distressed purchasers with broken boilers, we have to supply replacements quickly. On the other hand, the commercial and industrial sectors are the opposite, and products for them have long gestation periods. As for the design of new technologies, there are sometimes longer lead times still.

What are the technologies of the future?

We’re working on several new types of fuel cell and a micro-CHP unit. But there is no expectation that we will necessarily finish them before the end of the decade.

What development is going to have the biggest impact on the sector?

We are starting to see a move away from the idea that systems can stand alone. What were once separate heating and cooling systems have now been incorporated into climate management systems in commercial buildings. To meet new regulations, buildings are becoming hermetically sealed boxes, using less energy and creating more comfortable environments. Legislation, therefore, is the biggest factor affecting developments.

For more information on Viessmann, visit stand L5 at Think in ExCeL, London, from 1 to 3 May www.think07.co.uk