What the sea brought in 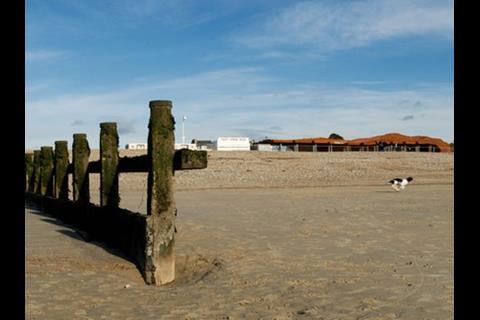 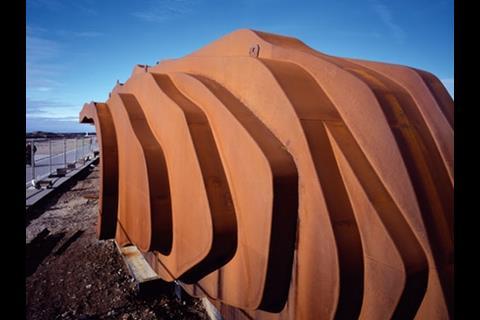 The building is broken up by ‘ribbons’ that start at the shutter boxes at the front, sweep up over the top and down the side facing the car park on the right 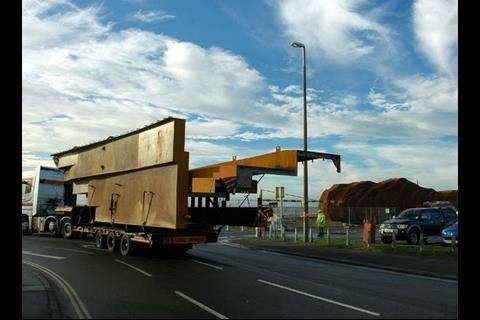 The sections were brought to site by lorry and craned into position. 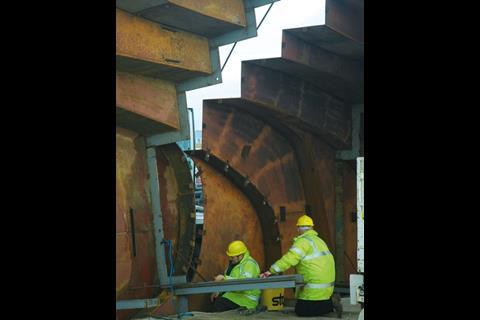 Crowbars were used to lever them into place. 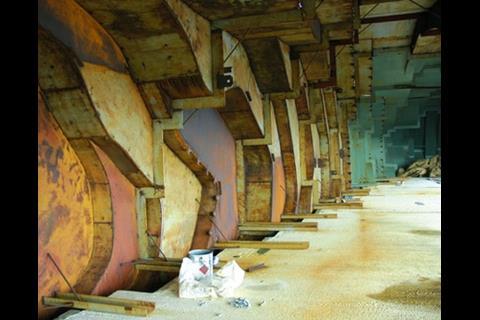 The interior will be a ‘soft focus’ version of the exterior. 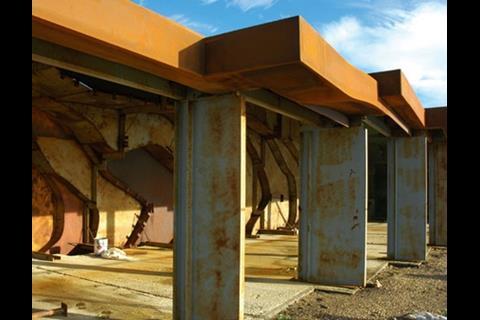 The profile of the shutter boxes is extended over the building. 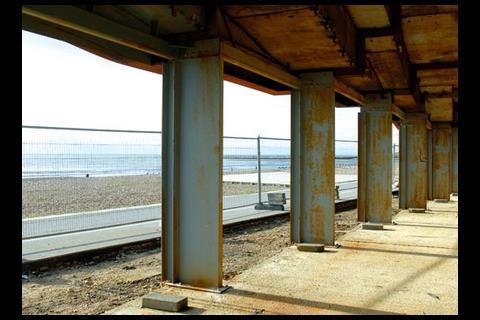 The front will be fully glazed

Heatherwick Studio wanted its design for a beach cafe to look like something washed up on the shore. Beachcombers – plus the odd passing dog – will be handsomely rewarded.

From a distance it could be a wrecked ship, a massive piece of driftwood or even something a dog left behind. On closer inspection the long, low, brown object turns out to be a large piece of rusty steel shaped into a series of jointed ribbons. Its creator wouldn’t be too disappointed with these musings on its origin, because the whole idea was to make it look like something you might find on a beach.

The object turns out to be a half-finished beach cafe sitting on the sand in Littlehampton, west Sussex. The reason for its unconventional appearance is because it is the work of Heatherwick Studio, which has designed a multitude of weird and wonderful 3D objects, including a bridge in London’s Paddington that rolls up like carpet, and the B of the Bang, the spiky monument to the 2002 Commonwealth Games in Manchester.

East Beach Cafe is the first building by Thomas Heatherwick, who founded the studio, and the story of its procurement and construction is as remarkable as its appearance.

The client is Jane Wood, a Londoner who was captivated by the unspoilt charm of Littlehampton and bought a flat right on the seafront. She was horrified to find that the owner of a small beach cafe in front of the flat had got planning permission to build a much bigger burger bar.

“It was unworthy of the location and unspectacular, with dolphins and motifs on it to give it a marine flavour,” she says.

“We approached him to buy it and he said, ‘I might for a figure’. He wasn’t that committed, so he agreed to sell it.”

Having successfully seen off this threat, it was up to Wood to promote a more interesting alternative. As someone who moves in architectural and design circles, this did not appear to be too much of a problem.

“Various people approached us to design it,” she says, “but I couldn’t think of a single architectural solution I felt comfortable with.” Then she had another offer. “Thomas approached me and said he’d like to do it.”

“The starting point was, we knew what we didn’t want it to be,” says Heatherwick. “So many seaside projects have been tuning into the Riviera yacht thing with white roofs and lots of stainless steel. That means nothing to me whatsoever.

“I don’t go on yachts, but I do wander around beaches and find lots of things, old bits of polystyrene and rope and bits of wood worn in interesting ways, which play around in your imagination. We wanted this project to be something of the beach and the sea rather than the buildings around it.”

Wood was delighted with Heatherwick’s ideas, but would the planners share her enthusiasm? To the casual observer, Littlehampton is a seaside town full of conservative retired folk who generally baulk at anything unusual. According to Heatherwick, Wood countered this by launching a marketing campaign from the other cafe she runs in the town.

“She has been an extraordinary client to make this happen,” says Heatherwick. “While she was selling buckets of chips and Mr Whippy ice cream, she’d show people the drawings and managed to get a lot of local support. So when it came to planning, it went like a dream.” Wood says the original burger bar received 400 objections, but her cafe received none.

So far, so good, but turning the concept into reality had to be done within tight constraints. Money was one. Wood says the cafe has been funded on the same business model as the proposed burger bar. And the site was difficult, sandwiched between a promenade on the edge of the beach and a car park behind it. The presence of a rising main on the car park side meant the site was 40m long, but only 5m wide, and the building’s height was restricted to preserve sea views.

The other constraint was the environment. “It’s a raw area. It will be beaten by sand, rain and pebbles. And it’s right next to the promenade, which has kids skateboarding and that sort of thing, so things get worn,” says Heatherwick. “We knew if we were going to have glass, it would have to be protected by roller shutters. Also, because the building had to be long and thin, we didn’t want its back to be a flat, monotonous surface.”

The choice of material also influenced the design. “One of the first things that drove the shape was what material to use and what would be robust,” says project architect Peter Ayres.

Another factor was the presence of local steelwork specialist Littlehampton Welding. “We had worked with them before on the rolling bridge and knew they were good and it made sense to use local skills,” says Ayres. “If there is one thing that ties this project together it is craftsmanship, and the people at Littlehampton are craftsmen.”

The next stage was to turn the concept into a buildable design. “Once the concept was sorted we spent a long time getting it right,” says Ayres. “We tried different angles and changing the geometry of it. That process was tricky.” He describes how he used CAD to drape a virtual “cloth” over the site, then shaped this to fit the constraints. This was sliced up “like a loaf of bread” and all the lumps and bumps of the cloth were extruded to form the series of ribbons. Getting the curves looking right was a painstaking job, a combination of CAD and hand drawings.

The building shell was made in Littlehampton Welding’s factory, brought to site in large sections and bolted together in four stages. This building does not have a frame. Rather, it is a fully welded monocoque structure, so assembling and joining all the components has been challenging.

It is made from 8mm thick mild steel, which Heatherwick says is 2mm thicker than it needs to be. He says Littlehampton Welding suggested this option because it meant the welded corners had a bigger radius, giving the edges a softer appearance.

The profiles prepared by Ayres were used to guide a computer-controlled water jet, which cut all the flat metal areas. These have been put together by Ernie Bayley and Dave Bowness of Littlehampton Welding.

“We have done some good jobs in our time, but this is the most complex,” says Bayley.

Each section was made by drawing a grid on the factory floor and using the upside-down U-shaped strengthening ribs to set out the sides and roof. The flat vertical plates were processed elsewhere; Bayley and Bowness had to fabricate the curved horizontal sections.

The job was not helped by the fact that the cutting process couldn’t cope with edges that came to a point. “A lot of pieces came in 400mm or 500mm short, which made the measuring more complicated,” says Bayley. Despite these challenges, he is enthusiastic about this job. “It’s something special,” says Bayley, who has worked for the company for 34 years. “It’s the shape of it; there’s been nothing built like it anywhere as far as we know, and we have had the honour of doing it.”

Having carefully built up a section, Bayley and Bowness then proceeded to chop it in half so they could get it out of the factory. This is not as mad as it sounds, because the section left behind in the factory was extended to form the next before being chopped again and taken to the site. This ensured that the sections would always fit together, as they had started off life as one. “You never could in a million years have got it to fit together otherwise,” says Bayley.

The first section to arrive on site was craned into position as one unit, but subsequent sections have consisted of more than one element. The final section has just been completed. Clearly, this was quite an event for Littlehampton as crowds gathered on the seafront to watch the operation. The event was well choreographed as the side was dropped in, loosely bolted into position and followed by the roof. Now all the sections are in place, their position will be optimised and all the sections will be welded together to create a watertight structure.

Now the shell is finished, work can start on installing the glazing to the front, the roller shutters and the inside. The interior will be formed from sprayed insulation followed by a hard plastic coat, which Heatherwick says will give a “soft focus version of the exterior shape”. The steel will be finished with a lacquer to retain its rusty appearance. All very modern; so will the cafe be serving up modern British cooking when it opens at Easter? Jane Wood raises her eyes in horror: “It will be traditional English seaside food, decently prepared.”

For more images of the cafe, go to www.building.co.uk/projects