Who guards the guards?: Arson and intimidation in Glasgow 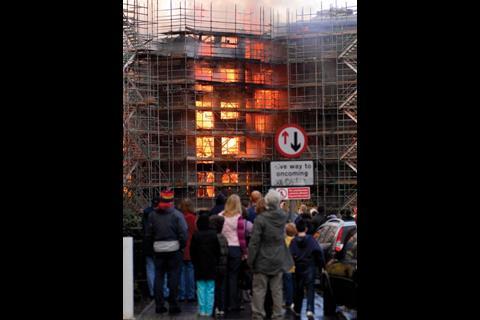 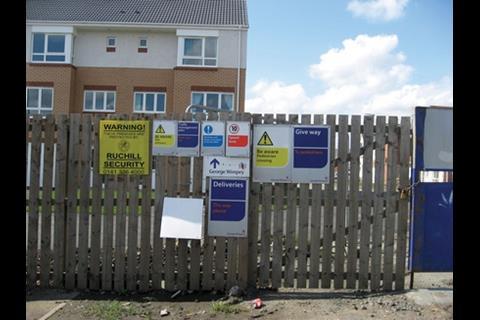 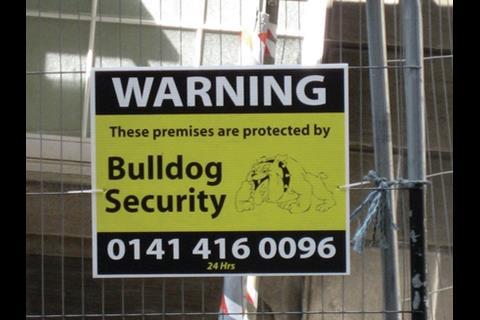 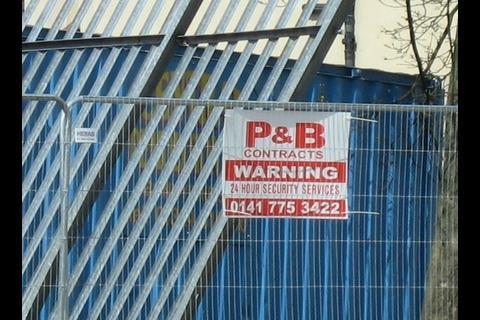 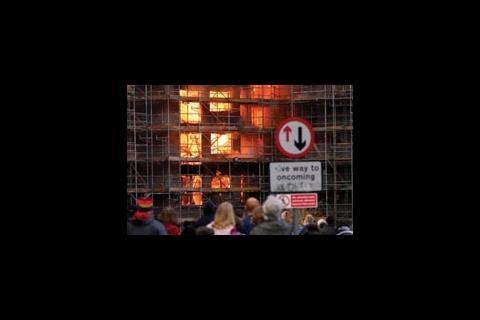 Some security firms in Scotland don’t bother with tenders when they bid for work. Instead they make an offer you find difficult to refuse, and if you do, they apply a bit of muscle. But why do the authorities let it happen?

Intimidation, theft, fires, violence, guns and gangsters. This is not a tagline for Grand Theft Auto IV but the reality of life on Scottish construction sites that get on the wrong side of rogue security firms.

“These guys are the serious hoodlums in Glasgow,” says one small contractor, who is too frightened of reprisals to give his name. “We had a job in Springburn recently. Someone walked onto the site and suggested that it would be a good idea to get some security. We said no, then there was a spate of petty thefts and damage.

“Direct threats were then made to a member of staff. He was told that if he didn’t pay up he’d be beaten up. I was pretty new to the game at that point and so asked a few colleagues what to do. They just said, ‘Unless you want all of your plant stolen and the site burned down just pay up.’ When you go somewhere you basically find out who the local chief is and approach him. That way you know you’ll be okay.”

Building went to Glasgow, where the problem is worst, to talk to contractors and labourers, and it heard the same story again and again – although nobody was willing to go on the record. The number of fires in recent years shows that “suspicious” blazes have caused millions of pounds of damage across the Scottish central belt (the box below lists some high-profile fires – although the exact cause has not always been proven). However, insurers simply pay out and charge higher premiums, and the police typically drop cases where nobody has been injured. It is little wonder that some of Scotland’s most notorious gangsters have flourished by running protection rackets that prey on the industry.

“I think it’s a shocking indictment on our society,” says the same small Glasgow builder. “The police involvement in this area has been very weak – they just don’t seem interested. The building where I first experienced this issue was within sight of Springburn Police Station for God’s sake!”

Slowly but surely the government has been taking steps to improve the situation. The Security Industry Authority (SIA) was established by the Private Security Industry Act 2001. Its remit was to stop criminals from running security firms by requiring all practitioners, from guards to owners, to obtain an SIA licence. This law was enforced with success in Operation Seahog in Liverpool, after a previous report by Building on the dire state of site security in the city. In November last year it was extended to Scotland and the construction industry waited for the clean-up to begin. And waited.

A source in the insurance industry, who declines to be named, says: “The legislation that came in hasn’t made a blind bit of difference. We’re talking about major criminals here, so taking their names off the company register isn’t going to be too hard.” The type of practices the source is referring to were exposed earlier this year by the BBC’s Panorama programme. It found that men with convictions for drug dealing and violent assault were returning from jail to run security firms as “consultants”.

This practice is not covered by SIA regulations, so they are allowed to operate untroubled by the law. In one example in 2005, Lewis Rodden, boss of West Coast Security, was sentenced to four years in prison (reduced on appeal to two) after he was found guilty of beating up a guard from a rival firm and setting fire to a portable toilet at a building site. Around the time he was released, a security firm called P&B Contracts appeared. This is run by his sons Paul and Barry, and Rodden is a “consultant” for the business. There is no suggestion that either Paul or Barry have been involved in criminal activity.

Despite these difficulties, the SIA has begun to hit back. On 12 August this year it staged raids on 15 sites in Greenock, west of Glasgow. Of the 12 security personnel checked by police and SIA investigators, seven did not have an SIA licence and two others did not have their licences on display as required by law. According to Christy Hopkins, lead investigator for the SIA in Scotland, this is the start of a long-awaited crackdown, codenamed Operation Protector.

“We are now doing operations once or twice a fortnight across Scotland,” he says. “These are similar to Greenock. We want to see a compliance level of 90% of security personnel with licences.”

Hopkins defends the SIA and Scottish police against the accusation that they are toothless in the face of the intimidation and violence. “The fact that this is the case for people doesn’t sit at all comfortably with us. We aim to drive it out and have done that in other areas such as Operation Seahog in Merseyside. It has not gone entirely, but in the two years we’ve been running the operation it has reduced dramatically. We’re in it for the long run in Scotland – I want to reassure people of that. We’re aware of how exposed builders are in and around Glasgow, but we’re only able to react to situations that we’re aware of so I would urge builders to come forward – anonymously if necessary.”

His claim that the cavalry is coming is echoed by Strathclyde Police. Following the recent Greenock raids, Superintendent Bobby Shaw said: “My intention is very clear: Strathclyde Police will not stand for security companies working outside the law … It is obvious from the results of Operation Protector that some of these companies think they can ignore the law. They do so at their peril, because we will revisit this again and again over the coming weeks and months.”

Hopkins says the reason that it has taken him and his six colleagues so long to start enforcing the rules is that they wanted to give people time to get up to speed. “The police are now gaining an appetite for dealing with this offence of working without licences,” he says. Another reason is the Glasgow Commonwealth Games in 2014: authorities are keen to avoid any hitches to the construction programme.

“We are very concerned about the exposure of the industry in Glasgow with the Games coming up,” says Hopkins. “There’ll obviously be a number of lucrative security contracts up for grabs and we really want to promote our approved contractor list for this. This is one aspect of Operation Seahog that worked particularly well in Merseyside. There is an issue with contractors employing people to provide security that they know don’t have the required licences. We would urge contractors to only use those firms that are on the SIA’s list of approved contractors.”

The use of this approved list is one of the key planks of a programme that Hopkins is plotting with the Scottish government for later this year. Currently all security guards are required by law to carry a personal licence from the SIA. The SIA hopes to take this a step further and persuade security firms to apply to join its list of approved contractors.

It faces an uphill struggle. During a visit to Glasgow earlier this year, Building found that none of the sites it visited used security firms on the SIA’s list (see the box below). Indeed, two of those employed, Ruchill Security and P&B Contracts, have been reported in the Scottish press and sources spoken to by Building as linked to organised crime.

The security firm whose name cropped up most frequently during the visit was Ruchill Security. This is run by Bobby Dempster who has been linked with a number of turf wars with rivals, as well as with the infamous Arthur Thompson, the late Glasgow godfather.

A spokesman for Ruchill Security said: “Any guard who would work on any construction site being guarded under the umbrella of Ruchill Security would most definitely have an SIA badge. As for the approved contractor scheme we are well into the process of applying for this.” He declined to comment on accusations of ties to organised crime.

A nearby site in Hamiltonhill, north Glasgow was guarded by P&B Contracts. In response to the allegations of its links to organised crime, a P&B spokesperson said they were “hearsay”. P&B also declined to comment on Lewis Rodden’s involvement with the firm.

One of the sites that Ruchill has a contract to guard is a large housing scheme on Balmore Road being built by the George Wimpey arm of Taylor Wimpey. A spokesperson said: “George Wimpey has written confirmation that all Ruchill Security’s guards are SIA-approved … In addition, we would expect any security supplier to uphold all legal and licence requirements.”

Although none of the firms employing non-approved contractors are doing anything wrong, the findings show how difficult the SIA will find it to ensure that only approved firms are employed. A spokesperson for the SIA says: “The approved contractor list is voluntary so it is up to firms to decide whether they want it. Obviously, we’d be delighted if everyone was signed up to this, but that is not realistic yet. Our main concern is to ensure that individuals are licensed and then to work towards their companies joining our approved list. This approach worked in Merseyside.”

In the meantime the builders of Glasgow will continue to have to face down thugs intent on making a fast buck from site security and not taking kindly to anyone who stands in their way.