Who wants to be in social housing?

Six months on from the collapse of Rok and Connaught, their competitors are scrambling to take their places against a backdrop of cuts and jittery
clients. And now the big players are looking to muscle in on the social housing market

Six months ago this week, Connaught collapsed, followed shortly afterwards by Rok. The immediate impact was obvious - the loss of thousands of jobs, and tens, perhaps hundreds, of customers left with no idea when their building work would be finished or repairs services up and running. Half a year on and the impact is still rippling out. Rochdale M&E contractor GTM Electrical, for example, is in talks with HM Revenue & Customs over its tax bill after it was left out of pocket by more than £400,000 of unpaid bills when the firms collapsed.

For GTM, read any number of builders up and down the country that supplied the two firms. The impact on these subcontractors - some of whom, like Chamois Furnishings, have already gone bust - is sadly predictable. What has been less clear until now is what the post-apocalypse market for social housing contractors would look like when the smoke cleared. Morgan Sindall’s housing arm, Lovell, made the most audacious move, spending £28m effectively to buy itself into the response maintenance part of the market. Its move was followed by others - Mears, Balfour Beatty, Primus and others have all made purchases. So despite the pressures in the market that made Connaught and Rok so vulnerable, the size of the opportunity - up to £9bn of work each year - continues to attract major players. But do these pressures make the traditional specialists - Morrison, Apollo, Keepmoat - vulnerable to UK giants like Balfour Beatty, Carillion and Wates muscling in on their territory?

The initial reaction of Connaught and Rok’s competitors to their collapse may have been one of relief - after all, both were notorious for underbidding on large contracts, and their exits potentially put £700m annual turnover back out to the market. But, six months on, those positive effects have been balanced by falling confidence from social housing customers. Since September, housing associations and councils have started requiring more information to demonstrate financial solidity, and have split up contracts to ensure they limit exposure to individual firms. Furthermore a number are looking at bringing work in-house, in part to limit exposure. Chris Durkin, chief executive of Willmott Dixon Support Services, says: “I think some probably will do it, but they’ve got do it with their eyes wide open, understanding the risks.”

William Shirley, analyst at Liberum Capital, sums it up. He says: “On balance Connaught and Rok [collapsing] will turn out to be a positive for others, but it may take longer to come through. Some customers are nervous and there may be a reluctance to award large contracts to one provider.”

And this is before the full effects of public spending cuts have been felt. Alan Long, executive director at Mears, which picked up a number of responsive maintenance contracts from Rok in Bristol, as well as work from Connaught, is positive on how customers have responded so far. But warns many local authorities may be facing drastic budget cuts. “Leave it two to three months into the new financial year and we’ll know what the impact will be. We’re responding by being able to offer councils a range of options in addition to straight outsourcing.”

Chris Cheshire, chief executive of relatively new player Kinetics, which has built up a £120m maintenance turnover in the last five years, says the response from clients to the collapse has been, in many cases, disappointing. “Most clients are going even harder for lowest price, rather than asking why Connaught went to the wall in the first place. Many are taking a cautious view on payments, meaning contractors are sometimes having to issue winding up petitions simply to get paid.”

That uncertainty is matched in new-build affordable housing and major refurbishment work, where huge cuts and the proposed introduction of a new way of funding homes by the government, have left many questioning whether the 150,000 affordable homes promised in the spending review can be delivered. The introduction of the Green Deal may lead to a large amount of housing work but, as work on the £37bn Decent Homes programme comes to a slow end, it’s not clear how contractors will access this work. Dennis Seal, executive director of Kier Residential Regeneration, says: “It’s like a muddy puddle - we need to wait for it to clear to see what’s at the bottom. But you have to assume that you can’t go from one funding model to another and immediately expect it to deliver the same amount of homes. Over time it may recover.”

Most think the fragmented nature of the social housing market - for example, in responsive maintenance, Mears and Kier are the leading players but have just 4% market share each - leaves it open for even bigger players to muscle in to take market share. Balfour Beatty’s purchase, through Mansell, of a number of Rok contracts, potentially gives it a new build social housing business of £220m a year - a base upon which it could decide to expand. And while other contractors, such as Sheridan’s Apollo, expect much of the work Lovell bought from Connaught to come back out to market, the purchase gives Morgan Sindall a turnover boost. Stewart Davenport, managing director of Lovell, says: “We’ve secured about 60% of the Connaught work that came over with the deal, which is what we expected. We knew we weren’t going to get them all. We also left any potential toxic [loss-making] contracts behind.”

The big unknown is Carillion, which is in the middle of buying a back door into the market through the acquisition of Eaga, which completes gas servicing work for social landlords, and has indicated it wants to go further. John Denning, Carillion’s corporate affairs director, says: “Currently most of our FM work is in education. But we are looking widely at the local authority and social housing market. We are very interested in FM of all types of property estates.”

Shirley adds: “The market is so fragmented there is scope for a leader to emerge with a much larger market share. Clients scrutinising contractors’ assets and financial position will tend to benefit the bigger players.” Cheshire says it is rumoured Wates is also interested: “When the economy’s under stress, you see the big boys look in
to social housing. But do they stay for the long term?”

One certainty is that the pressures that made life so difficult for Connaught and Rok haven’t gone away. But the size of the market, and the relative stability, particularly of responsive maintenance work, makes it attractive for larger players. But with pricing relentlessly competitive, the last thing the sector and all those damaged subcontractors needs is another major failure. 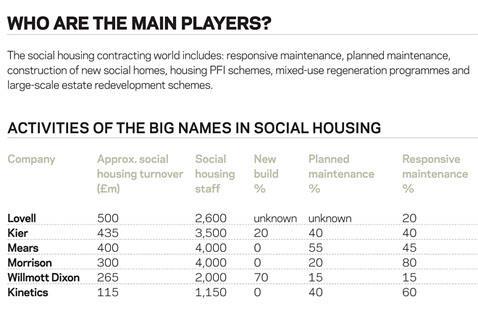