Who’s getting their hooks into you? 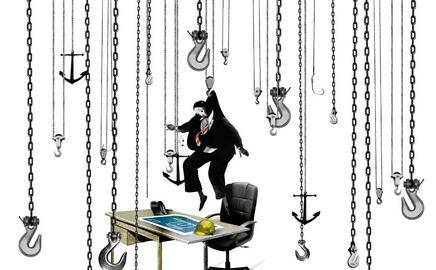 As order books grow to unfeasible lengths, firms are increasingly desperate to recruit. Unfortunately, they’re all fishing in each other’s pond, with increasingly evil results.

A few weeks ago, Building’s readers began complaining about a series of suspicious phone calls.

“Hello!” the voice would say. “I’m calling from Building magazine. We’re starting a new awards event for rising stars in the industry. Could you nominate a few of your best people?”

Hmm, the respondent would reply, I’m not sure. Could you send me an email with the details? “Er, no … I’m afraid our email’s down. If you could just give me some names, now?”

Of course, it wasn’t Building on the line and as the caller rang off when his victim smelled a rat, we don’t know who’s been thieving our identity. Most likely, the calls are the latest guerrilla tactics in an increasingly dirty war over precious human resources.

Many people say the current shortage of skilled staff in the construction industry is the worst in living memory. There is plenty of work around for contractors and consultants. The problem is, firms can’t find enough people to do the jobs. Everyone is recruiting, or trying to. Gaps on site are being filled by eastern European labourers, but it’s not so easy to import professional talent.

“It’s the biggest barrier to growth,” says Neil Clemson, a director at Faithful + Gould. “You can spot a great potential market, but you need someone in it or you can’t go down that route.”

The industry’s largest recruiters have ambitious growth targets. Bovis Lend Lease is constantly on the lookout, with 250 vacancies at the moment, Atkins is looking for 1,500 people over the next five years, Mace wants 1,000 more. In Building’s latest consultants’ survey last October, two-thirds of firms said recruitment difficulties were holding back growth; a Chartered Institute of Building survey earlier this year found more than three-quarters had problems.

Competition for the best graduates is stiff, but they’re even more valued a few years later when they’ve picked up a professional qualification and some experience. The market for newly chartered QSs, middle-ranking site managers and project managers and specialist consultants is red hot right now, and therefore ripe for exploitation by the less scrupulous members of the recruitment consultant community. By helping along the cycle of poaching and wage inflation, they can milk their clients for ever higher fees.

Headhunters typically cold-call people and offer them a higher-paid position elsewhere. Often there’s no actual job – they just get them to take the bait, then call recruiters and sell their catch on to the highest bidder. The greater the salary they obtain, the higher their fee – typically between 15% and 25% of the first year wages.

“I get two or three calls a month,” says one QS who passed her assessment of professional competence last year. “Everyone I know does. You’re always polite because you don’t know how you’ll feel in six months.

“They’re very good at what they do. Sometimes you are a bit persuaded but mostly you can tell they don’t have a specific role in mind. It’s entertaining – I’d be offended if I didn’t get any calls!”

Howls of anguish from human resources departments have prompted at least one industry body to investigate – the Association for Consultancy and Engineering (ACE) is looking into the behaviour of recruitment consultants in its sector.

“The feedback we’re getting from members isn’t encouraging,” says Nelson Ogunshakin, chief executive of the ACE. “Some agencies call up staff within six months of placing them to offer them more money – they’re creating an artificial market. Our industry depends on planning resources – it doesn’t help companies to deliver on time and to budget when staff are leaving all the time.”

As well as the uncertainty, there’s the pressure on pay. “Our staff are approached constantly,” says Clemson. “To get good people, you have to pay high salaries. Salaries are rising faster than fees and our ability to pass on increases in staff costs is limited.”

Stephen Reilly, recruitment manager at Bucknall Austin, believes pay levels have outstripped experience. “Some entry-level QSs are commanding salaries above and beyond their technical capacity, especially when they have limited business-development and client-facing skills,” he says.

“You’ve got people asking for silly money that can equate to a 20% increase in salary for a move, but they’re not that experienced. We understand when people elect to go to a competitor for reasons like a location change or to work on a specialist project. But when they are only going for money that’s above their capability, the industry can’t sustain it. You will end up with a load of inexperienced QSs who are all on £50k-plus.

“We will pay the top salaries but only for staff who have something valuable to offer in terms of experience and competence.”

Fortunately for Reilly, his staff aren’t that susceptible. “Today I’ve had three people come and give me the names and numbers of people who’ve tried to headhunt them.”

What does he do about it? “There’s nothing much I can do, but I give them a call.” He finds they take one of two tacks: “Either they say ‘I’m really sorry, it won’t happen again’, or they say ‘If you’re not paying our fees, we’re going to use you as a source’.

“If you say you’re not prepared to sign an agreement to use them, within half an hour, you’ll get 15 calls to people in your office.”

The feeding frenzy isn’t good for staff, either. “It doesn’t give candidates any opportunity to decide what they want to do – the main motivation is a higher salary,” says Reilly. “Even if you’re not looking and someone offers to double your salary, it’s hard to turn down.”

Rising salaries foment unrest among longer-serving staff too. “Everyone that comes into your firm, you know is getting more than you are,” gripes one QS. “And you’re the one showing them how to do everything the whole time.”

Employers are fighting back with non-cash perks and nice-place-to-work initiatives, but constant approaches from headhunters make it an uphill struggle.

“I am convinced they are fuelling feelings of dissatisfaction with pay,” says Janette Green, corporate HR manager at Gleeds.

“It’s not really money people want, it’s job satisfaction.” Nor does Green believe the skills crisis is as acute as it appears. There’s little real analysis on the subject, she says, and firms refill positions without considering how administrative or IT work could be delegated to free up managers and make their jobs more satisfying.

Almost everyone says they use agencies despite the high cost, but HR professionals complain of their tyranny. “You hack them off and they’ll drop you as a client,” says one. “Agencies hold you to ransom,” agrees another. Neither wanted to be named.

Some entry-level QSs are commanding salaries above their technical capacity. The industry can’t sustain it. You’ll end up with inexperienced QSs all on £50k-plus

“When staff resign, it’s easier for them to say ‘I was headhunted’ than to say they just wanted to move. There’s a lot of smoke around this fire. If a candidate has been placed, they’ve gone willingly to an interview.”

Hays staff do not re-approach anyone they’ve already placed – it’s a disciplinary offence. Cook says he would be happy to investigate in any case where this has happened.

Fed up of the hardball tactics of some of Hays’ rivals, Green says Gleeds will no longer use recruitment agencies from next year, and is considering a number of alternative strategies, including trying to get more people to come up through the ranks.

More entrants to the industry are needed at every level, but training cuts into the fee-earning time of senior staff. Ogunshakin suggests that the government offer tax breaks to firms that take on people outside the industry to offset the expense of training. Other firms are stepping up recruitment campaigns in schools and universities.

Until these initiatives kick in, there seems to be only one answer. “If you want really good people, you have to poach them,” says Tim Mote, development director at ISG InteriorExterior. The firm takes on 100 graduates a year, but it is crying out for site managers between graduate and senior level. It has to recruit from competitors.

Several firms admit they’ve taken on an in-house headhunter to poach candidates from their rivals directly. An atmosphere of secrecy surrounds this sort of practice – firms don’t like to admit to it because they will be perceived to be underhanded, or because they fear competitors will copy their tactics.

One firm that is open about it is Mace, which set up a selection division, Mace People, in 2004. “In the UK, they’re our first port of call, and they deal with other agencies for us, too,” says HR director Cath Knight.

“We know we can direct them much more than we can with any other recruitment organisation. When other recruiters send CVs, we don’t know how many other organisations they are sending them to, or if you were in some kind of auction over who’ll pay the most.”

Mace People has an aggressive reputation among Mace’s rivals. Its website gives advice on resigning from your job, but it’s pretty dismissive on how to weigh up an attractive counter-offer from your existing firm. “They have to be pretty persistent to find the right candidates, as they’re competing against other consultants for the same people,” says Knight. “I certainly have no complaints about it.”

When Spencer McCarthy, chairman and group managing director of Churchill Retirement Living, was pestered by a particularly diligent headhunter he offered the caller a job. “I thought this was the sort of thing we needed. If someone was doing this directly for us, we could make sure we got the people we wanted. We’ve spent a lot of money on agencies and I wasn’t happy with the quality of individuals they were putting forward.”

“It’s been very successful,” he adds. In the year McCarthy’s headhunter has been on the staff, Churchill has recruited 150 people. Over the next year, he’s aiming for another 160. So, is he calling your competitors’ staff and poaching them? “I hope he is,” says McCarthy. The headhunter also plans the year’s recruitment strategy and manages a sizable advertising budget. “It leaves management to get on and do their jobs.”

So where will it all end? There’s little hope of a sudden influx of ready-made QS or project management talent. Overseas recruitment drives are a popular strategy but, with a building boom stretching from Dubai to Guangzhou, the market is becoming more competitive. The difficulties of securing visas for foreign staff also limit the numbers coming in to stay.

Rising salaries should at least attract people from outside construction and improve the industry’s standing in the eyes of parents and careers teachers – witness the glut of new plumbers since the recent well-publicised shortages. In the mean time, it doesn’t look like there will be any let-up in the furious pace of work – or in the fierce competition for staff.

What are your experiences of headhunters? Email us at building@cmpi.biz or follow the “What you think” link on our website