Significant investment in rail, water and energy infrastructure will drive a strong pipeline in tunnelling for the next decade across the UK. The design and engineering of tunnels can mitigate their impact and optimise construction 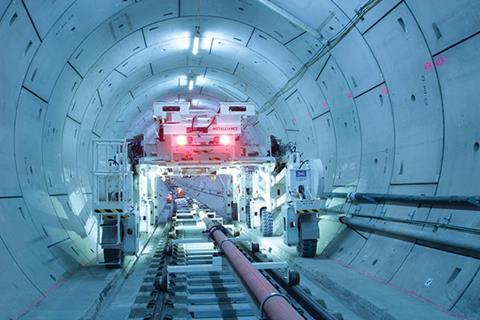 The UK has a proud tunnelling heritage, including the world’s first subaqueous tunnel, built under the river Thames in 1843. The good tunnelling conditions north of the River Thames (London Clay) have allowed many mass transit tunnels to be built since 1863. However, the more sandy and gravelly ground to the east and south of London has traditionally been more difficult to work in, explaining the wider use of surface rail elsewhere.

The design and construction of tunnels and underground infrastructure will continue to be key to sustainable development, balancing the demands of a growing urbanised population and the desire to preserve the environment. A tunnel is a one-off solution, relying on a variety of tunnelling methods optimised against the constraints imposed by the ground conditions and tunnel’s function, as well as challenges surrounding logistics and land acquisition.

Putting effective contract and procurement strategies in place is essential to effectively manage risks associated with tunnelling, and the long lead in time for the machinery involved.

Infrastructure projects will turn to tunnelling when it presents the most cost-effective way of achieving desired outcomes. However, tunnelling projects impose significant impacts on the local environment, particularly in busy metropolitan areas, which must be mitigated through pre-planning and innovation, making tunnelling safer, and reducing the impacts.

Tunnelling is widely used across a multitude of sectors, including transport, water, and so on. The UK tunnelling industry requires a consistent, predictable and long-term pipeline of work to maintain capacity and investment and with a large number of potential projects, including HS2 and Crossrail 2, prospects are currently very bright.

02 / When is a tunnel the right solution?

Tunnelling is only used when it is the best way of achieving the desired socio-economic benefits from an infrastructure project. A wide range of factors determine the viability of a tunnel, including engineering feasibility, environment and economic impacts, public consultation and land acquisition.

There is a rural-urban divide in the drivers behind major tunnelling projects. In urban spaces, tunnelling will often deliver immediate benefit to the local population, be it improved transport or increased power capacity.

By contrast, in rural environments, tunnels are mostly used to minimise the impact of infrastructure that will have a direct benefit elsewhere, such as the National Grid North West Coast Connection Tunnel, across Morecambe Bay, used to re-route transmission cables.

In summary, while tunnels in cities increase benefit through increased accessibility, rural tunnels mitigate the wider impacts of national investment.

Rural and urban spaces therefore have strong, but different drivers for the choice of tunnelling: in rural environments there is plenty of space for necessary infrastructure, but limitations surrounding its environmental impacts, whereas in urban environments, space limitations are often a significant challenge affecting both design and construction. In both cases, a balanced solution delivering social, environmental and economic benefits must be achieved.

Other drivers of the need for a tunnel as opposed to above ground infrastructure include:

Due to high initial costs and the extended life of tunnelled infrastructure, benefits do need to be sustained over an extended period of time to pass the viability hurdle.

If demand for the asset is neither predictable nor sustainable over time, then clearly investment will be much more difficult to justify.

Tunnels are one-off projects – using well established solutions adapted to the geology, the route taken, tunnel function, groundwater conditions, and many other factors.

There are many factors that need to be considered when designing and constructing a tunnel including:

Disciplines involved in the design of a tunnel are wide ranging and include geotechnical, examining ground conditions and predicting ground movement, environmental sciences to assess and mitigate wider impacts of tunnelling, and soil and rock mechanics as well as specialist skills in aeraulics, hydraulics and safety.

Route design optimisation
Tunnel design requires significant pay-offs between the best engineering solution and other considerations. Route optimisation is concerned with the design of a solution which represents the best balance of utility, cost and programme, risk and wider impacts, which include:

Innovation
Innovation in design and tunnelling techniques has had a key role in managing the risks and impacts associated with tunnelling, as well as increasing the safety of working conditions for operatives. 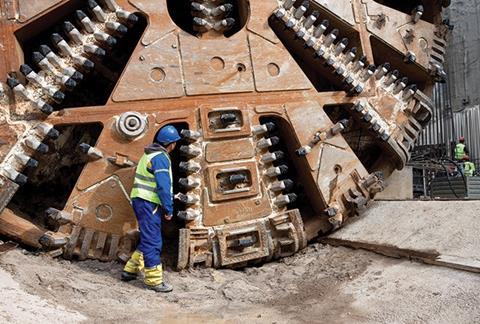 A worker with a tunnel boring machine

Risk mitigation and management in tunnelling
Tunnelling in congested urban environments has the potential to create massive damage and disruption as the result of an accident, as well as high-levels of nuisance to neighbouring uses both during construction and operation. Environmental impact assessments are naturally a key aspect of the permitting process – driving an early commitment to detailed design so that full impacts are understood and mitigations assured as part of the approvals.

High priority areas of mitigation include:

04 / Economics and procurement of tunnelling

Table 2 sets out indicative tunnelling costs for bored tunnels using either a Slurry TBM or an Earth Pressure Balance (EPB) TBM sourced from the HS2 programme.

Logistics
Logistics has a critical impact on programme and the impact of the project on its neighbours. The most significant aspects of logistics involve getting machinery into position and supplying materials including linings and removal of spoil. In some instances, tunnel boring machines will need to be assembled in access shafts – introducing further constraints into where tunnel drives can be run from. There are strategies for avoiding road congestion, with Crossrail using rail deliveries and the Lee Tunnel using the river to save about 80,000 lorry journeys. Muck disposal is also a consideration. Crossrail has created a new nature reserve in the Thames Estuary with their excavation waste.

Significant challenges are likely to be encountered when tunnelling in city centres, where the above-ground footprint may be very restricted. For example, the recent Bond Street Station expansion has access through two 9m diameter shafts to the tunnelling site 20m below. Sites for Crossrail and Thames Tideway are also constrained by available sites, which inevitably places a limit on the rate at which tunnelling works can be undertaken – extending the programme and increasing overall project costs.

Contract strategy
Contract strategy is an important consideration, due not only to the inherent risk involved in tunnelling but also the extensive up-front costs associated with design, plant purchase and logistics. Contracts in tunnelling tend to be design and build, based on a reference design provided by the client team, which is adopted by the contractor. The reference design will typically be about 30-40% complete but will be the basis for most of the approvals and licences. NEC contracts are often used as they allow for a clear allocation of risk between contractor and client. It is standard practice to include a geotechnical baseline report defining the ground conditions accepted by the contractor. Deviations from expected conditions may form the basis of a compensation event.

In general, the NEC Option C variant is used, enabling ready valuation of the contractor’s expenditure and the basis for a pain/gain incentivisation. With the target cost approach, effective project controls including earned value analysis are essential to provide assurance that delivery performance is on target.

Procurement
Tunnelling projects typically have long lead in times. Even after procurement, it typically takes nine months to manufacture and a further three-plus months for site assembly and set up of a tunnel boring machine. Given the need for specialist skills, it is essential to understand capacity in the market and how to structure the works contracts and communicate any preference for joint ventures.

This can be done by engaging the supply chain at an early stage.

Early market engagement, will typically involve a review of the packaging strategy as well as the envisaged contract strategy and risk allocation. Early engagement also enables contractors to form joint ventures with suitable experience. The packaging strategy may be structured to take account of capacity as well as the impacts of geology basis. For example on TTT, there are three main tunnelling contracts of a reasonable size, each awarded to a different joint venture. By splitting the works contracts up, TTT secured better competition, reduced levels of risk per contract and also accessed specialist skills for different ground conditions. Early engagement and a considered contract strategy are essential to securing the right mix of capacity, on the appropriate balance of risk and reward.

Though tunnelling skills tend to be a global resource pool there are still some shortages of designers and civil structural engineers, meaning that contractors often have to pay a premium for these skills.

To mitigate this, the UK has established Europe’s only dedicated tunnelling and underground construction academy, with capacity to train up about 200 tunnelling staff at a time. Long term investment is set to continue, with the UK government contributing £1.1m of funding, to match £1.7m of industry investment in creating a legacy of engineering jobs and skills. 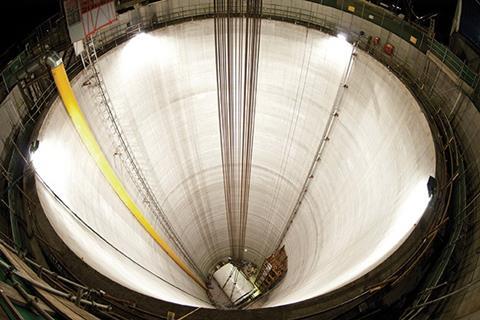 The Lee Tunnel is the UK water industry’s largest project since privatisation in 1989 and currently the deepest tunnel built in London, delivered at a total cost of £635m. The project will stop the pollution of the nearby river Lee, which currently receives an overflow of sewage and storm water when the capacity of London’s 19th century sewage system is exceeded during storms. It is the first of two tunnels to be built as a part of Thames Water’s London Tideway Improvement system.

Every year some 39m tonnes of sewage mixed with rainwater flow through CSOs (combined sewer overflows) into the Thames; the Thames Tideway Improvement programme is designed to minimise these overflows as well as improving sewage works. The first stage was an upgrade to all sewage treatment works, the second is the construction of the Lee Tunnel, and finally the third is the TTT, which will run 25km from Acton to Abbey Mills where it will connect to the Lee Tunnel.

The Lee Tunnel is designed to convey and store sewage and storm water from Abbey Mills pumping station Combined Sewage Outfall in East London to the Beckton sewage treatment works. It needs to be deep enough to meet the Thames Tideway Tunnel at its lowest point, 75m below ground level. The project constructed by the MVB JV has posed unprecedented challenges in dealing with high groundwater pressures in the deepest sections, where the groundwater pressure is up to 8 bar, eight times the air pressure found at sea-level.

One of the greatest innovations on the project was the construction of five shafts, the largest ever sunk in the capital, with the UK’s deepest diaphragm walls. These shafts are a world first in the building of inner linings to a diaphragm wall as huge, stand alone, concrete chimneys, enabling the shafts to withstand the huge water pressure acting upon them. The largest shaft is 38m internal diameter with walls 98m deep. Lessons taken from the Lee Tunnel will be adopted by the larger TTT project. Further innovations minimised the steel content and carbon footprint of the tunnel, as well as significantly improving its durability over its full lifetime.

TTT tunnelling starts in 2017, with Thames Tideway project completion in 2023, and the project will make good use of the benchmarking and innovative techniques sourced from the Lee Tunnel.

The UK’s strong pipeline and continued demand for tunnels will support capacity in the industry for the next decade at least. When tunnelling is the most cost effective way to achieve desired socio-economic outcomes, projects will move forward while seeking to minimise the costs and significant impacts on the local environment. This can be achieved in optimising the route, and construction, based on ground and groundwater conditions, and the function of the tunnel, as well as looking to use innovative methods to increase safety. Early engagement of the supply chain and transparency surrounding procurement and contracts are essential to ensuring capacity adapts to the future pipeline and UK tunnelling continues from strength to strength.