PLP founder Lee Polisano’s greatest hits cluster the City skyline, visible from his London office. As the 10th anniversary of his practice and the looming storm of Brexit approach, he discusses what further work he sees on the horizon. 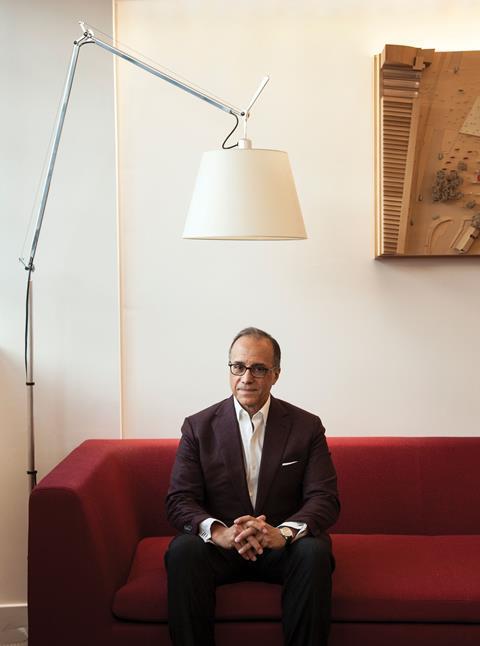 Lee Polisano is standing in the middle of PLP’s studious open-plan offices, which take up a floor of a listed art deco building near the Tower of London. It’s a slightly forgotten corner of the City, a long way from Clerkenwell for an architect. But for a commercial practice like PLP it makes perfect sense. When clients visit, the directors need only wave an arm towards the window to draw attention to some of their highest‑profile projects.

The sixth-floor reception has a captivating view of the City of London’s eastern cluster, where some of the capital’s most iconic skyscrapers are being eclipsed by PLP’s 22 Bishopsgate, soon to be the tallest building in the UK after the Shard.

As he anticipates these twin achievements, Polisano looks back at how he got here, and where he sees the future of this practice so associated with London’s commercial sector in a post-Brexit world.

The day 22 Bishopsgate reaches completion will be a sweet moment for Polisano and one laced with symbolism. Twentytwo began life in 2001 in the very different shape of the Pinnacle, when he and its designer Karen Cook were running the London office of US giant Kohn Pedersen Fox (KPF). It got as far as the seventh storey before work ground to a halt in the crash of 2008. “The Stump” was eventually demolished.

All this coincided with Polisano’s acrimonious divorce from KPF after 30 years, the biggest since Ken Shuttleworth left Fosters. The circumstances remain disputed but cost PLP nearly £3m in compensation and legal fees. “It wasn’t an easy departure,” he says, with some understatement. “It wasn’t a handshake.”

The sense of betrayal back in New York is still palpable. Polisano, the boy from New Jersey who rose from junior architect to global president, took most of the London office with him, including Cook and three other directors. They won the job of designing the Pinnacle’s replacement for Lipton Rogers in a fist fight with KPF. Gallingly, perhaps, KPF’s just-completed Scalpel is one of the other towers in that view now being dwarfed by Twentytwo.

The defectors brought many clients with them and as some of KPF’s London office projects transferred over so did the relevant staff. The fledgling firm grew from 17 to 65 in two months. They camped out in spare Arup offices in Camden, courtesy of Polisano’s friend at the firm, David Glover. There are now 220 staff, based in London, Beijing and, for the last year, Tokyo. The firm’s first overseas office, which opened in Doha to much fanfare in 2013, quietly closed as work in the Middle East fell away.

Where the work is

For an architect so heavily identified with the London commercial market, international work is of growing importance – now nearly 50%, says Polisano. This has been reflected in the transition into a new company, PLP Architecture International, whose first-year accounts were filed last month. The highest-paid director earned £412,000 in 2017 and turnover was £19m. They’ve come a long way in a decade. “We made £4,000 in revenue in that first six months,” grins Polisano.

With Brexit looming, diversification is prudent. Unlike some practices PLP has no plans to open an EU studio but does already have a registered continental entity for European tenders.

“The whole Brexit thing has caused a bit of a slowdown here,” Polisano remarks. “In every sector – everything we were involved in, anyway.”

He adds: “Brexit was a terrible mistake. I spend a lot of time privately worrying about it – 75% of people in our office come from outside the UK.”

So far it has not hit recruitment but that is a concern: “Every creative industry relies on migration of talent,” he says. “If we don’t have that global mix we are going to suffer. I worry about London because I live here. There’s still a lot that needs to be done here but I’m not sure what’s going to happen.”

But what if Brexit goes badly wrong? “We’d have to be a slightly smaller business. There’s a lot of things going on out there that can help us. But if it goes horribly wrong and all the big stuff we are doing in the UK at the moment went away we’d have to make an adjustment [lose staff]. But there’s no sign of that so far. It’s such a long-term thing. Clients are keeping us on.”

For the moment, he is keeping a keen eye on the practice’s core traditional markets. The capital’s luxury residential market is “soft”, Polisano says, in the same week that Almacantar boss Mike Hussey took half Centrepoint’s flats off the market rather than slash prices in response to international nerves over Brexit and a possible Corbyn tax regime. Ten of the Shard’s flats are still unsold six years on. High-end offices – PLP’s other signature sector – also face an uncertain future.

“Super large-scale projects like Twentytwo will be on hold in London for a while, until things sort themselves out after Brexit,” he concedes. Outside Britain the picture is rosier. PLP has just been shortlisted for a 200,000m2 headquarters in Moscow and has been appointed to overhaul a derelict office tower in central Milan.

It has also just landed a 500,000m2 university campus for 12,000 students in India, in competition with 20 other practices. This is a new sector for PLP but it’s not its first project in India. It is advising a handful of companies over there on sustainable building strategies. Similarly in Japan advisory work has led to actual buildings and urban planning projects. Sustainable offices The Edge in Amsterdam and Sky in west London caught the eye of overseas clients, he says.

The innovation in such projects excites Polisano, who can sometimes be seen wandering round the office wearing augmented reality specs. These allow a client to experience their building while it’s still on the drawing board. He is in the process of setting up PLP Labs, where architects, visualisers, modelmakers, physicists and psychologists, for example, will collaborate on research – everything from building technologies to senior living. Soon all staff will have 3D printers on their desks.

“Architects are being marginalised and technology could really help our profession,” says Polisano. “PLP Labs is a way to help us gain a bigger voice. We’re the people to do R&D because architects are the most inquisitive members of the professional team.”

If all this sounds like fun, that’s because, he says, “it’s part of our business model to make sure we can always have fun”. At this exact moment a man wheels a trolley of beer through the office for later consumption.

Polisano shares the leadership with four other equity partners, Cook, David Leventhal (the L of PLP; the final P is for Partnership), Ron Bakker and Mark Kelly – but his shareholding is largest. Kelly replaced Fred Pilbrow, who was part of the founding quintet but quickly deserted to form his own practice in a painful echo of the KPF divorce. Polisano refuses to be drawn beyond “hoping he would have left in a slightly different way”.

Day to day, PLP is run by financial director Tony Plaw, leaving the partners free to concentrate on design. Polisano explains the strategy. You can aim for volume – and always be a bit stressed – or you can pick what he calls quality projects, the ones involving innovation and craft which will attract new clients.

So, as PLP enters into its second decade, what projects will Polisano choose to work on? Not necessarily the easy ones, it seems. He claims to enjoy long, complicated jobs, which is lucky given the 18 years it took to build Twentytwo and the 14 it took to realise Gerald Ronson’s Heron Tower. And he doesn’t require easy clients, either. Ronson and Twentytwo’s Stuart Lipton are two of the biggest, toughest – if very different – characters on the London property scene. Not many architects could handle both successfully, says Peter Rees, who was the City’s planning supremo for all these towers.

“Lee’s very good at being the quiet eminence,” he says. “He’s prepared to listen. Power certainly emanates from him but not in an aggressive or show-off way. I’ve seen him have a calming influence on clients who become obstreperous when planners criticise their buildings.”

Polisano’s take on Ronson and Lipton is that they remind him of his uncles. “I feel very comfortable with them,” he smiles. Here is clearly a man who is quite at home with any amount of daunting challenge – and with Brexit coming, with all its potential to hammer London’s commercial and residential market – that could be a very useful thing.

Polisano, now 66, was born into an Italian-American family in gritty Atlantic City in New Jersey. His mother was a hairdresser, his father a civil servant. He was the first in the family to go to university – initially to study geology – but his grandfathers were builders and he and his younger brother used to build things in the garden. He quit college to spend a year skiing in Switzerland, where he discovered Le Corbusier. When he returned it was to read architecture and industrial design.

Now he lives in one of Chelsea’s smartest streets and when he does site visits he stays in the same kind of swanky hotel as his clients. He’s impeccably dressed and softly spoken and everyone describes him as tough and a workaholic, though they disagree over whether he’s a team player or a one-man show. But it turns out he does have some time for hobbies.

“Well I ski and I go to the cinema – and I box three times a week at a gym in Camden,” he says, enjoying the surprise his words provoke. And it’s not white-collar boxing – “I don’t believe in that”. Maybe this is the real secret of his success with hard-nosed clients and expensive lawyers.

But in fact he says he no longer divides his life into work and not-work – he just does whatever’s important on any given day. He’s less stressed and sees more of his family and friends that way. But he does take a box of papers home on a Friday night.

He ends: “I can honestly say I’ve never been happier or had more fun than since we started PLP. We have a great office; great people. A lot of the people that came with us took a risk. I feel we owe them a great future – and they’ve helped make the future.” 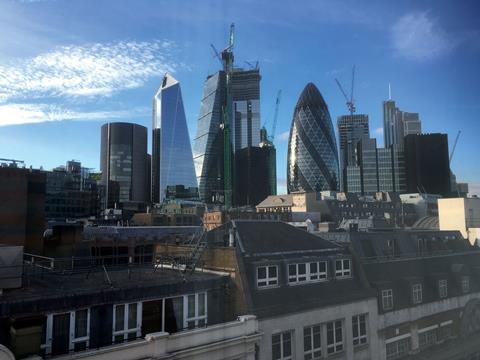 “There’s no room for more [in the eastern cluster]. I think it’s gone a little too far.”

“It will be a real disruptor for what it’s doing with commercial buildings.”

“For a while we were a bit nervous about the scale of it … It’s a similar glass to the Shard but two generations on so it’s incredibly clear and white and reflects the sky in a beautiful way. It’s going to be very, very nice to look at.”