More packages experienced an increase in lead times than in the previous quarter, while a growing number of companies are struggling to find skilled labour as workloads increase

Facade cleaning equipment ▶ lead times remain at 33 weeks and contractors are still busier with enquiries compared with six months ago but do not anticipate any change over the next six months.

Demountable partitions ▶ lead times remain at 11 weeks, with busier workloads and increased enquiry levels, but no increase is forecast in the next six months. General joinery ▶ lead times remain at 16 weeks with companies continuing to forecast potential increases. Specialist joinery ▲ lead times increased by one week to 25 weeks due to rising workload and enquiries; companies are expressing concerns over the impact of Brexit on availability of labour.

Lead times continue to bounce around the highest levels since these records began in 1998. The dip in lead times across three packages last quarter, which potentially signalled a peak, has been replaced by an increase in lead times across four packages – steelwork, drylining, specialist bespoke joinery and non-standard passenger lifts. Many companies report that while enquiry levels and workload remain level, a shortage of skilled labour is becoming an issue, with a number expressing concern about the impact of Brexit on the availability of labour going forward. 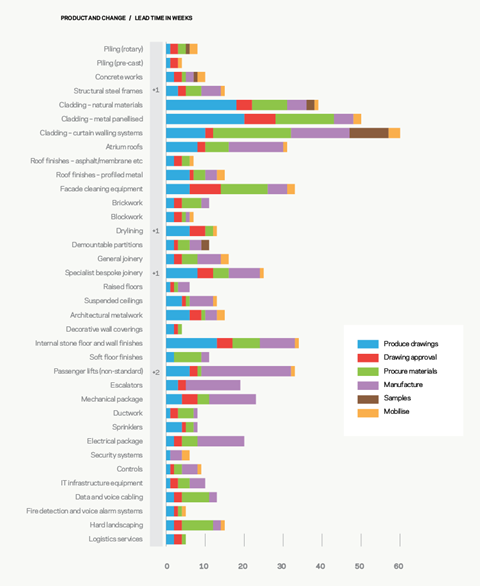 Data capture and analysis by Mace Business School. For more details on the article and the contributors please visit www.macegroup.com/people/suppliers.