Lead times are frozen across the board, and with enquiry levels beginning to fall, there are unlikely to be many increases over the next six months. Brian Moone of Mace reports

Rotary piling lead times have increased by two weeks to seven weeks, following a decrease last quarter - this is the only reported change this quarter. The fluctuations appear to be due to the demand from major infrastructure projects in London and the South-east. Pre-cast piling has remained stable at five weeks since 2008 and no change is anticipated.

Concrete works remain at eight weeks for the second quarter in succession. Structural steel frames have remained at 16 weeks for more than a year. There are reports of delays in the supply of certain “advanced” steel sections from Europe.

Cladding - natural material has remained at 28 weeks since the beginning of 2011. Metal panellised systems have been at 27 weeks since Q1 2010 and no change is forecast. The increased workload in curtain walling last quarter appears to have diminished - it stays at 43 weeks.

Facade cleaning equipment is at 35 weeks for the second quarter. Despite companies being busier, there is no change forecast.

Brickwork remains at five weeks. Most companies are reporting that the workload has stabilised but the enquiries compared to the past six months are lower. Blockwork stays at six weeks. Drylining is also stable at eight weeks, with no change forecast.

Demountable partitions have remained level at six weeks since the end of 2009.

General joinery lead times have been re-stated at 12 weeks with no change forecast. Specialist joinery has stabilised at 19 weeks.

Raised floors remain static at six weeks, with no change since 2007. The increased workload in suspended ceilings reported last quarter has reduced and lead times remain at 16 weeks.

Architectural metalwork has been at 12 weeks for more than a year, enquiries are up but workload remains the same.

Internal stone floor and wall finishes lead times have remained the same at 23 weeks, despite an increase in manufacturing time. Soft floor finishes have remained at eight weeks since the end of 2010.

Passenger lifts non-standard remain at 26 weeks, and escalators at 21.

Electrical packages have been at 14 weeks since mid-2009, despite a one-week increase in manufacture. Mechanical packages remain at 18 weeks with most contractors reporting a reduction in workload over the next six months. Manufacture times from some products have increased by two weeks, with a corresponding reduction in design time (see overleaf). Ductwork remains at eight weeks.

Sprinklers remain at eight weeks. There are no changes forecast, although reduction in supplier stock levels are starting to increase delivery times on components.

Security systems have remained at five weeks for more than two years. Controls remain at seven weeks, with no change forecast

Hard landscaping stays at eight weeks, with no change forecast. Workload and enquiries continue to be down.

Logistics services remain at five weeks, with no change forecast.

The previously reported increase in workload across many contractors has died down; most anticipate lead times remaining the same over the next six months as enquiry levels remain the same or reduce. A number of contractors are reporting increases in the delivery time of manufactured goods, due to reduced stock levels and production capacity; however, in most cases the contractors are finding it necessary to absorb these increases by resourcing other areas to secure the work.

Data capture and analysis by Mace Business School. For more details on the article and contributors, please visit www.macebusinessschool.co.uk/foresite 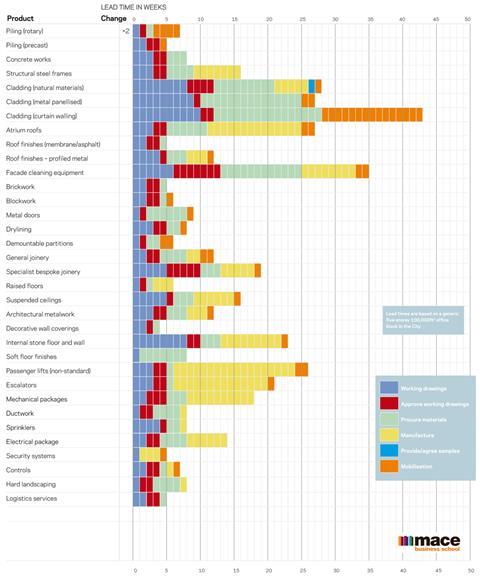