Seven trades are reporting an increase in lead times this quarter, with several more anticipating increases over the next six months due to demand

Rotary piling ▲ Lead times continue to increase as forecast, with another week added to the two reported last quarter, taking the lead time to nine weeks. Further increases are anticipated in the next six months.

Concrete works ▶ Lead times continue at seven weeks, where they remained for over a year, increases anticipated over the next six months due to demand.

Structural steel frames ▶ Remain at 14 weeks despite companies experiencing increased workload and enquiries. Increases anticipated in the next six months.

Cladding - natural materials ▶ Lead times are 31 weeks, where they have remained for the past year.

Cladding - metal panelised system ▲ Lead times have increased for the first time in over five years. The increase of five weeks to 32 weeks has been attributed to capacity being reached. Some material suppliers are also increasing their procurement periods.

Cladding - curtain walling system ▶ Lead times have remained at 43 weeks since the beginning of 2012. Increases anticipated over the next six months.

Atrium roofs ▶ Lead times have been revised to 31 weeks following improved data. Companies are busier but do not anticipate an increase in the next six months.

Roof finishes - asphalt / membrane ▶ Lead times have remained at seven weeks for over a year. Contractors report a rise in workload but do not anticipate increases.

Roof finish - profiled metal ▶ Remain at 14 weeks for the third quarter, no further increases are anticipated.

Brickwork ▶ Lead times remain at their extended level of 11 weeks, caused by availability of bricks and labour. No changes anticipated over the next six months.

Dry lining ▲ As previously forecast, lead times have increased with the design and approval process, and availability of some trims being sighted as the reason for the two-week increase to 10 weeks. No further increases are anticipated in the next six months.

Demountable partitions ▲ Lead times have increased by one week to nine weeks, as previously forecast.

General joinery ▶ Lead times have increased by one week to 14 weeks with no change forecast.

Raised floors ▶ Lead times remain static at six weeks with no change since 2007. Contractors report that workload has increased but they don’t anticipate longer lead times in the next six months.

Suspended ceilings ▶ Lead times remain at 13 weeks with no increase forecast for the next six months.

Architectural metalwork ▶ Lead times remain at 16 weeks and there is no increase forecast for the next six months despite increases in workload.

Internal stone floor and wall finish ▶ Remains at 28 weeks for the second quarter.

Passenger lifts (non standard) ▶ Lead times have been revised to 30 weeks, workload and enquiries have increased but no change in lead times are forecast.

Escalators ▶ Lead times remain at 19 with no change forecast for the next six months.

Electrical packages ▶ Lead times remain at 15 weeks. Contractors are busier and enquiries are up but times are not anticipated to increase in the next six months.

Mechanical packages ▶ Lead times have not changed for a year and remain at 17 weeks. Contractors are anticipating an increase in the next six months.

Ductwork ▶ Lead time remains at eight weeks with no change forecast for the next six months.

Sprinklers ▶ Lead times remain at eight weeks. No increases over the next six months forecasted.

IT Infrastructure equipment ▲ Lead times increase by three weeks to nine weeks due to distributor stocks being low in some areas. Contractors anticipate further increases in the next six months.

Data and voice cabling ▲ Lead times have increased by two weeks to 13 weeks with further increases forecast due to increased workload and enquiries.

Hard landscaping ▲ Lead times have increased by four weeks to 15 weeks with procurement of materials being the significant factor. No further changes forecast.

Logistics services ▶ Lead time remains at five weeks, despite being busier there is no change forecast. 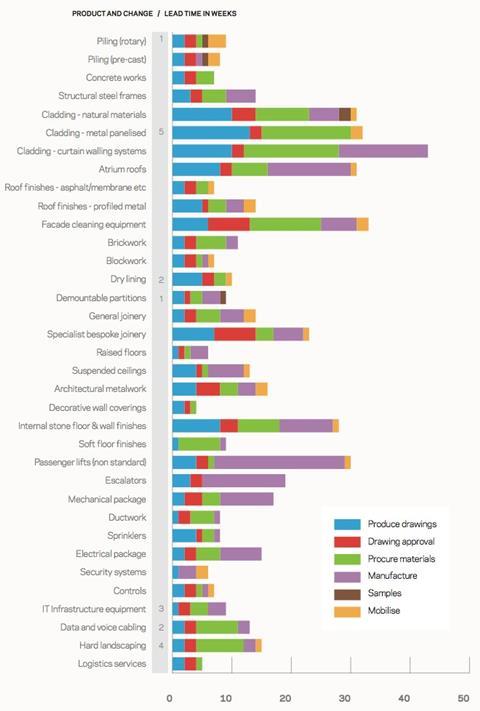 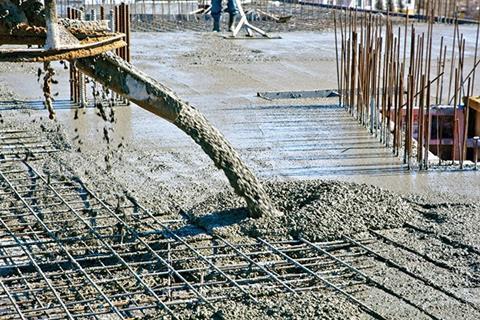 With the property and commercial office markets heating up, and some large civil engineering projects on the way, the concrete industry has had to judder to a start to meet demand, with lead times likely to be affected. Brian Moone of Mace Business School reports

Although there has been talk recently of a cooling in the construction market, there is no sign of the pressure on the supply chain declining. Any reduction in the construction market has been primarily in the infrastructure and housing markets, while foreign investment has meant that there continues to be significant growth in a number of areas, including the prime residential market, particularly around London. This is continuing to put a strain on the specialist contractor market that is still recovering from reducing capacity to survive the recession.

As the prime residential property market in London grows, the insitu-concrete frame market will also increase its market share of the construction spend, as it is generally the preferred construction method for residential buildings.

The latest lead time analysis has shown that over 50% of trades have increased their lead times over the past year and in many cases by in excess of 25%. However, as yet there has been little sign of the insitu-concrete industry being effected by the growth in construction. Nevertheless, looking behind the numbers, and speaking to concrete contractors, their industry is already reaching capacity and many are beginning to be selective about the projects they bid for.

Over the next couple of years we will be seeing the start of construction on a significant number of residential units in the capital, such as the regeneration of Nine Elms, as well as Television Centre and Chelsea Barracks to name a few that are building up to a peak in 2017. A report produced by EC Harris in 2013 forecast that the prime residential market in London would produce 20,000 units over the next 10 years, which would peak at over 4,200 units built in 2017. More recent data indicates that this could already be exceeded with new projects coming on line since the report.

The demand for concrete for the residential property market does not sit in isolation. There continues to be growing demand for concrete for the expanding commercial office market as well as the large civil engineering projects. Major ongoing projects including Crossrail, London Underground works and Thames Tideway will be competing for the concrete supply over the next few years.

On the other side of the concrete supply-and-demand equation to market is the concrete production and supply industry. This industry is responding but it is having to wake up from a prolonged recession at a rapid rate to meet these new demands. Replacing or recommissioning of a mothballed concrete plant that was closed during the recession requires planning and investment and therefore this industry cannot be as agile as other more transitory areas of construction. Even the reduction in gas pricing and the demand for greener energy is having an effect. With energy producers switching from coal to gas-fired generators, contractors are reporting that pulverised fuel ash, a product of coal-fired energy production used in concrete manufacture, is now in short supply and is now being sourced outside of the UK.

Looking back at the lead times trends for concrete shows significant spikes within long periods of stability. The lead time for concrete has remained at seven weeks since the beginning of 2010, which followed a short peak of 12 weeks in mid-2008. The main issue, as described by one of the major concrete contractors, is the concrete industry’s ability to respond to the current market: what he described as its “elasticity being strained”, making it no longer able to absorb the changes in the market. This will now start showing in longer lead times.

A sign that the concrete producers have a full order book is the fact that many are now able to charge a levy on cancelled or deferred orders and contractors are placed back in a queue for future deliveries, a situation that would have been unsustainable for the producer when demand was low. The availability of experienced labour, supervisors and managers is also strained as the industry recovers. This is forcing pay levels up further and stretching companies that are struggling due to cash flow pressures on a rising market to meet the new wage demands. The lack of these resources means work has to be prioritised with start dates being pushed back, or reduced resources leading to activities taking longer to complete.

At this stage it is not possible to forecast the extent of the impact, but based on analysis of responses to previous market pressures, over the next 12 months it would not be unreasonable to make provision to manage a 70% increase from seven to 12 week lead times. As with all trades, securing capacity with concrete contractors will be key to minimising the impact of increased lead times. Main contractors and clients that have developed mature, long-term relationships with their supply chain will be in the strongest position to do this, but inevitably it is likely that the risk can only be minimised, not negated. It will therefore be necessary to manage this within the programme, particularly as the concrete frame is likely to be on the critical path for the project.