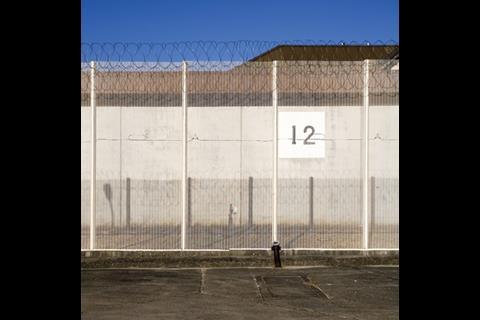 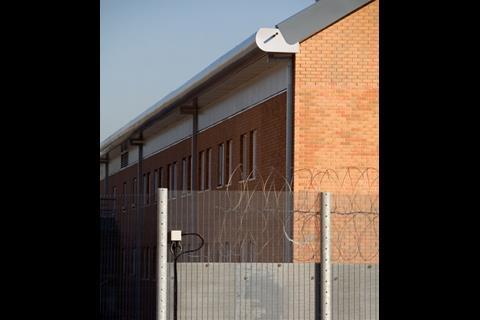 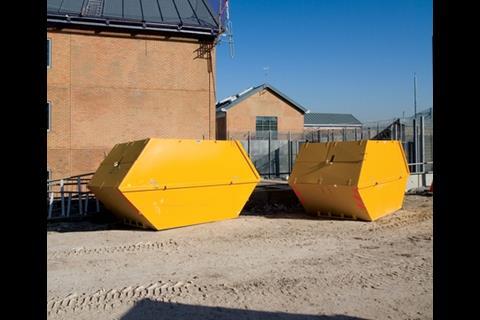 Skips have to be kept locked when not in use 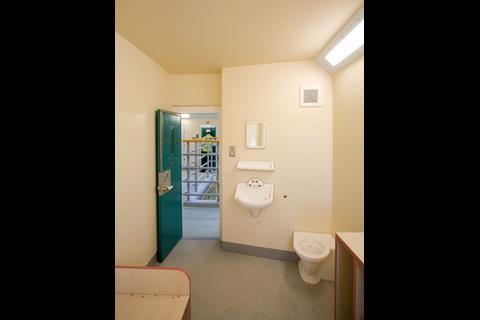 The standard layout of the new cells 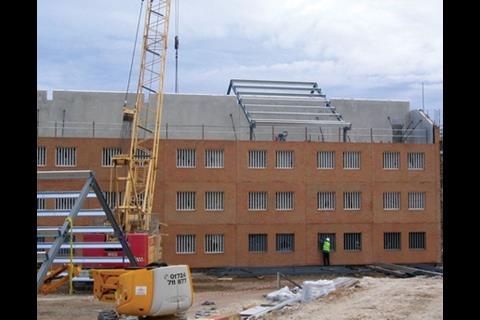 Cantilevered scaffolding was needed for the roof cladding. Kier is planning to use a fully prefabricated roofing system on its next prison project. 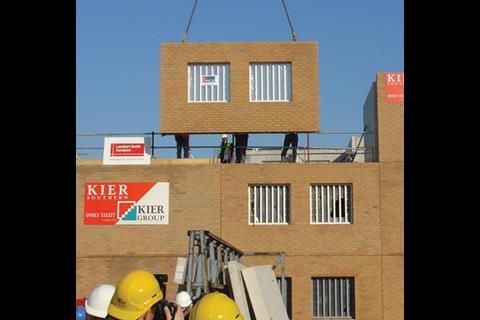 The panels come with brick cladding, avoiding the need for scaffolding 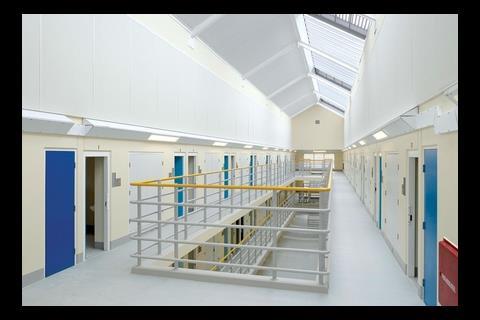 It was like the Great Escape in reverse. How do you get inside a prison to double prisoner capacity without giving your captive audience any funny ideas about all that scaffolding? Using a panelised system was one solution – though not half as much fun as smashing a hole in the perimeter wall. Thomas Lane does time at HMP Highdown in Surrey

Getting into prison is hard if you haven’t been convicted of a crime. Visitors need to present photo ID and go through an airport-style security check including the (by now) usual x-ray, bag, boots and shoes search.

Once through you wait in a holding area for an escort because you can’t go anywhere in a prison without being escorted. And when you finally get going, there’s a locked door every few metres, requiring a the use of a cinematic bunch of keys. Every fence and low-rise building is topped with razor wire. There are wires stretched mid-air across courtyards to stop helicopters spiriting prisoners away. Not that that’s ever happened, here at HMP Highdown in Sutton, Surrey.

Anyway, it takes about half an hour to get to the area where Kier has just built two accommodation blocks and an education centre. These will let 360 prisoners join the existing 742, a capacity expansion common now as the government scrambles to enlarge its maxed-out prison estate.

Building “inside” is difficult. Bill Heyes, Kier’s prison framework manager, says it takes 30-50% longer. Think about scaffolding for a minute. To you, it’s just scaffolding, but to 742 other pairs of eyes it’s the most inviting climbing frame since primary school. How do you do scaffolding? You clad it in corrugated iron, top it with razor wire and secure the base set in concrete.

And skips. What about skips? To you they’re big rubbish bins, but to some of the incarcerated they’re the handiest teleportation devices since Star Trek. Skips must be kept locked and you need a permit to take them offsite.

And you have to be invisible. Prisoners move around for education and exercise at set times and at these times contractors must vanish. At lunchtime everything effectively shuts down.

By comparison, the 2,500-place “Titans” that are to be procured as part of the government’s £2.3bn prison programme should be a breeze because the monsters will be built from scratch. But Kier had to come up with a whole new system for extensions to working prisons.

“You have to remember the prison doesn’t want you there,” says Neil Sanderson, programme manager for custodial property in the Ministry of Justice. “But if you get on with them, they will make your life easier.”

“Getting on” means every single step has to be planned in advance and approved by him and the prison governor.

Kier decided prefabrication was the way to go. (Innovation is encouraged in the framework deals. It wins big points.) Volumetric units are frequently used for new-build prisons. “Volumetric” means already assembled rooms, so that they contain volumes of air, but Sanderson doesn’t like volumetric because it means scaffolding. You need scaffolding to clad them. Also, he says, they take an age to fit out.

So Kier went to Holland to look at a precast panelised system made by a facade supplier called Hurks and they were impressed. “It really opened things up for us,” says Heyes.

The Hurks system consists of a precast concrete panel with an insulated cavity and a brick skin – which means no scaffolding. You crane the panels into position and grout them watertight. Precast slabs are used

for the floors. Panels are more flexible than volumetric because you can use different sizes to match the space you’ve got, and security grilles can be cast in, which eliminates vulnerable, onsite fixing. And the finish is so good that it can be painted without plasterers, which cuts labour down even more.

Sanderson liked it, even though a panelised solution had never been used before. “This is the best innovation we’ve had,” he beams.

Another way of gaining access was explored. Because the site was so far from the entrance, it was cheaper to build a road around the edge of the prison and knock a hole in the wall. So they did, and built another wall inside to make a kind of enclave. Security was still very tight, though. All vehicles had to enter through a secure compound and be checked by prison officers. Site workers also had to be vetted for any criminal convictions. “If you have a minor offence and don’t declare it, you’re automatically rejected,” says Andrew Oliver, Kier’s project manager on the job. “There’s been quite a few,” he adds.

Work started in February 2006, with a 38-week programme. But in July that year more money became available and Sanderson decided to add a second block. According to Oliver, the work went smoothly as the panelised system came into its own. “The only wet trade we had in was to screed the ground floor,” he says.

The real challenge for Oliver came when the prison service decided it wanted to get prisoners into the first block before the second one was finished. It would have been easier to hand over both blocks at once but that would have meant waiting two or three months, a luxury the prison service can’t afford now that every cell is in demand.

This meant security had to be ramped up as Kier had to access the site using the main prison entrance. The prison hired 50 extra people just to escort the contractors around. “It was a shock when the full force of the security arrangements hit me,” says Oliver. They had to block up the hole in the perimeter wall, drawing a sigh of relief from the prison officers, and move the internal wall to separate the two new blocks.

The project has been a success from both Kier’s and the prison service’s points of view. Kier is using the same system to add capacity to Lewes prison, a Victorian jail that takes convicts from the Sussex area, and it will also be used at Norwich but with one important development. At Highdown the roof was constructed using prefabricated steel framing but was clad conventionally using scaffolding cantilevered from the top of the building. At Norwich a fully prefabricated roof will be used. “This will make a huge difference,” says Heyes. “The building will be watertight faster, it will get rid of the scaffolding and will be safer to build. It will take the risk out of the job.”

Each new block is L shaped and sits right next to its neighbour to form a ‘T’. The space between the blocks is a secure corridor for moving inmates. Inside, each L makes up a wing housing 90 inmates over three floors. The cells open off an easily patrolled atrium with a control room situated where the two wings meet, so prison officers can keep an eye on both wings at once. Each cell is small with a built-in single bed and a cupboard fashioned without ligature points, made by the prison service and installed by Kier. The cell also contains a WC and hand basin made from a plastic material and an automatic tap. This is to prevent inmates from smashing porcelain and flooding the block. The windows don’t open. This stops inmates chucking rubbish out. (The ground outside the existing blocks is pretty squalid and needs cleaning daily.) Heavy duty vents bring fresh air. This is the first block in the prison service to feature underfloor heating. Traditionally heat is provided by pipes running through each cell under the window. This gives 250mm extra space, and removes an effective hiding place. The wall separating the cells from the atrium has a service zone so faults can be fixed quickly. All drainage pipes are metal so inmates can’t start fires by throwing burning toilet rolls down the pan. (The things you have to think of!) The atrium is 50% wider than earlier buildings to get more natural light into the block. “It creates a far better environment for the staff and customers,” says Sanderson. It should save electricity, too. The prison also features the first geothermal heating system in the prison service. “Energy bills in prisons are huge,” says Sanderson. The new blocks at Lewes prison also being built by Kier feature biomass boilers, again a prison service first.