Sentiment surveys for the UK economy in Q3 2015 suggest a slight softening of growth in the UK.

Markit reports that the PMI sentiment indicator for the whole economy fell to 53.9, its lowest reading since April 2013. Markit predicts that the UK economy will have grown by 0.5% in Q3 compared to 0.7% in Q2. The National Institute of Economic and Social Research also predict that growth in Q3 will soften to 0.5%.

The labour market continues to perform particularly strongly in the UK with the unemployment rate declining again, to its lowest level in seven years. Unemployment stands at 5.4% in the three months to the end of August compared to a peak in 2011 of 8.9%.

The rate of inflation fell once again into negative territory to -0.1% in September with the continued decline in oil and other commodity prices as well as lower domestic food prices contributing to this.

Most commentators expect inflation to start growing towards the end of the year as these falls will be factored in to the yearly change figures. However, the price of oil remains low and the impact of this may be to suppress the inflation rate for longer than originally anticipated.

Every individual sector saw falls month on month, with the biggest drop being housing with 9.9%. This was also down by 28.9% on last year

The latest figures from the ONS show that the construction sector decreased by 4.3% between July and August, and when you compare output levels with August last year, this shows a decrease of 1.3%.

Every individual sector saw falls month on month, with the biggest drop being public housing with 9.9%. This was also significantly down by 28.9% on the same month last year. Private housing was slightly down 1.6% on the previous month but only 0.2% down on August 2014. Output remains at a high level in private housing. Private commercial was down slightly at 1.8% but was still 1.1% up on August 2014. Encouragingly, infrastructure was 31.6% up on the same month last year (see Construction activity by sector).

The CPA/Barbour ABI Index, which measures the level of contracts awarded using January 2010 as its base month, recorded a reading of 157 for September. This is an increase from the previous month and continues to support the view that overall activity in the industry remains strong. The readings for private housing remain high at 242. Commercial offices activity also increased in September, recording a figure of 139 up from 123 in August (see Contracts awarded).

The construction sector
According to Barbour ABI data on all contract activity, September witnessed an increase in construction activity levels with the value of new contracts awarded at £7bn, based on a three-month rolling average. This is a 7.9% increase from August and a 24.8% increase on the value recorded in September 2014.

The number of construction projects within the UK in September increased by 8.1% on August, and were 4.4% higher than September 2014.

A number of large infrastructure projects were awarded in September, boosting contract award values and continuing the strong performance seen in recent months.

Projects by region
The majority of the contracts awarded in September by value were in the East Midlands, accounting for 35% of the UK total. This is followed by London with 25% of contract value (see Locations of contracts awarded in September). The strong performance of the East Midlands is primarily due to the award of the £3bn contract to develop the Race Bank offshore wind farm. It is another sign of the continued growth in these types of projects in the UK and this is the largest single project awarded by value that has been recorded by Barbour ABI. London also had a major infrastructure contract awarded in September, which accounts for a large proportion of its 25% contract value share. The Thames Tideway Tunnel main works were awarded at a value of £746m and are set to be carried out over the next seven years, boosting the infrastructure sector within the capital.

Types of project
Infrastructure had the highest proportion of contracts awarded by value in September with 59% of the total value of projects awarded. In line with its strong performance in recent months, renewable energy projects were the major type of contract awarded with the Race Bank offshore wind farm worth £3bn and the Teesside renewable energy plant in Cleveland valued at £150m. The residential sector had the next highest share of contract value, accounting for 15% of all contracts awarded in September. 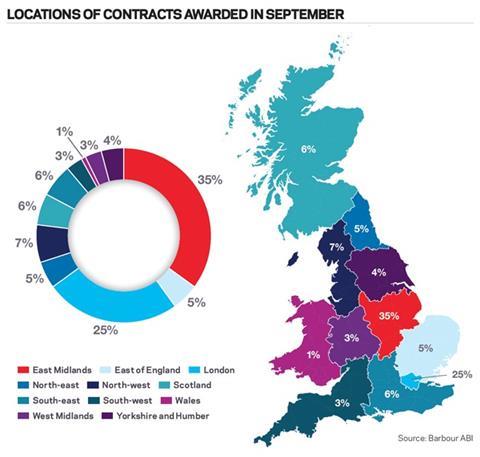 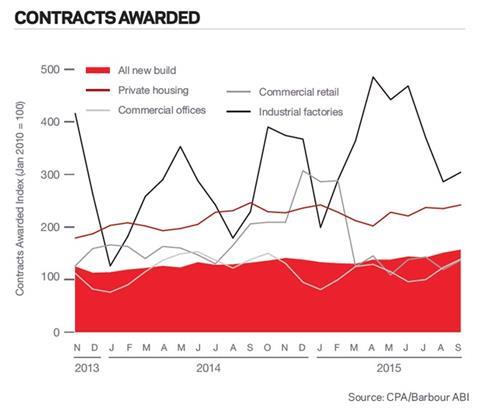 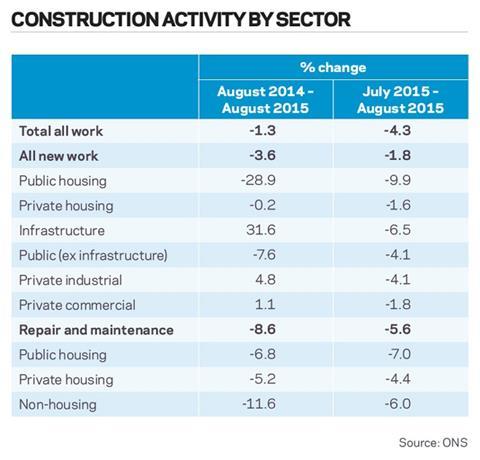 A major offshore wind project awarded in September saw the value of infrastructure contracts increase to a total of £2.8bn based on a three-month rolling average, significantly higher than this time in 2014.

Projects by region
The East Midlands dominated infrastructure contracts in this month, accounting for 52.5% of value awarded, a 49% increase on this time last year (see Value of contracts awarded & Map and figures). One contract in particular contributes to the East Midlands proportion – the Race Bank offshore wind farm, valued at £3bn. It is the largest renewable energy contract ever recorded by Barbour ABI by value. 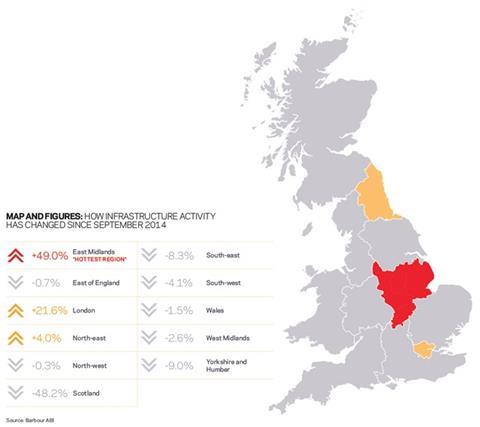 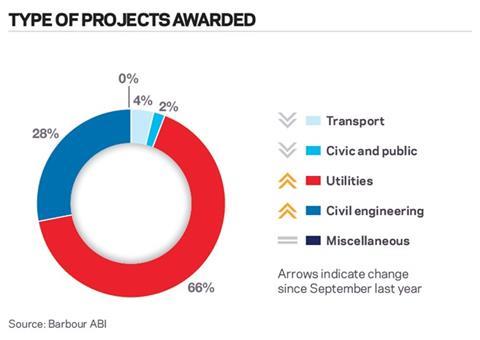 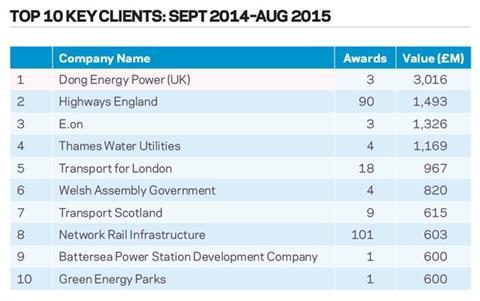 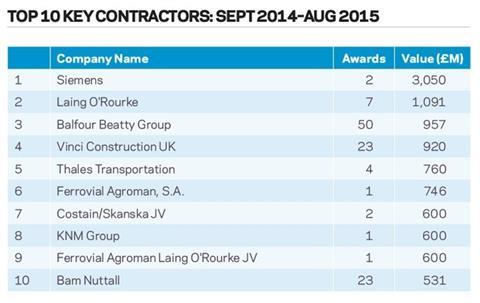