Market review: Slowly does it

Growth continues throughout the UK economy and construction sectors, but the gains being made are slowing down significantly. Here are highlights of Barbour ABI’s latest monthly Economic & Construction Market Review

Growth was confirmed at 0.7% for Q3 2014 with economic performance also upgraded for 2013 by the Office for National Statistics. The government’s Autumn Statement predicted growth in the UK economy of 3% in 2014, but this looks unlikely based on the latest figures. Various sentiment surveys have pointed to a slowdown in the final quarter of 2014, making a growth figure for the year of around 2.5% more likely.

With GDP continuing to grow, other macroeconomic indicators also continue to point to an improvement in the UK economy. The labour market continues to be the star performer with the unemployment rate in the three months to November at 5.8%, down from a recent high of 8.4% in November 2011.

Inflation also continues to fall with the latest figures showing the CPI rate in the UK is now 0.5% in December compared to 1% in November. This is largely attributable to the falling oil price which has transferred through to drops in petrol station prices. This has lessened the likelihood of an interest rate rise with the financial markets now not expecting increases until the first quarter of 2016.

Over the course of 2014 the UK economy has performed well and has exceeded most commentators’ expectations, particularly in labour market performance. However, a number of risks remain to UK economic growth in 2015. There are various political uncertainties which could impact on growth, not least the outcome of the upcoming general election, as well as the possibility of Britain leaving the EU. In addition, productivity in the UK economy remains weak, which is likely to continue to drag on economic performance, and wage levels also remain low. It is possible that falling inflation may go some way to addressing this, but the broader issue of comparatively poor levels of productivity remain.

The latest figures from the ONS show that the construction sector in the UK shrank by 2% between October and November 2014, but contract award values increased over the year.

Construction output levels showed an increase of 3.6% compared with November 2013. This provides further evidence that growth in the sector began to slow.

It is clear that the housing sector is the main component of growth within the industry over the longer term. In particular, private housing output increased by 23.8% in November from the
corresponding month in 2013 (see Construction Activity by Sector, right). Output in the private commercial sector fell 3% year-on-year and the infrastructure sector decreased by 3.5%. This highlights that the growth patterns within the industry are reliant on housing and broader improvements are needed to ensure a robust recovery.

The CPA/Barbour ABI Index, which measures the level of contracts awarded using January 2010 as its base month, recorded a reading of 138 for December (see Contracts Awarded, right). This is a slight decrease from November, but continues to support the view that overall activity in the industry remains strong. The readings for private housing and commercial retail increased this month but commercial offices fell to 95. 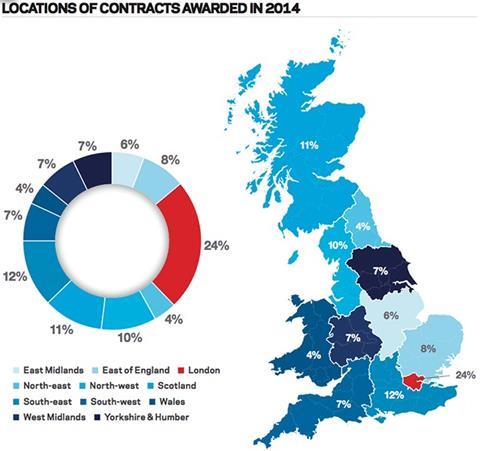 According to Barbour ABI data on all contract activity, the value of all construction contracts awarded in the UK was £64.2bn in 2014, an increase of 2.8% compared to 2013. This is reflective of the year overall, which saw growth in contract value continue but at a more moderate pace than 2013. To put this figure in perspective, growth in construction contract value between 2012 and 2013 was 25.2%, and between 2011 (which was a particularly poor year) and 2012 it was 29.1%.

Residential had the highest proportion of contracts awarded by value in 2014, with 32% of the total - this is unsurprising given the increase in activity in the sector over the course of the year. The infrastructure sector also featured prominently in 2014, accounting for 20% of the total value of all projects and commercial & retail accounted for 18%. This is an indication of the continuing strength of the residential sector within construction and this pattern looks set to continue into 2015 with such a significant pipeline in existence. 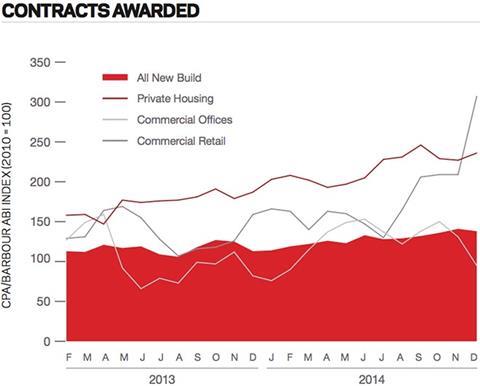 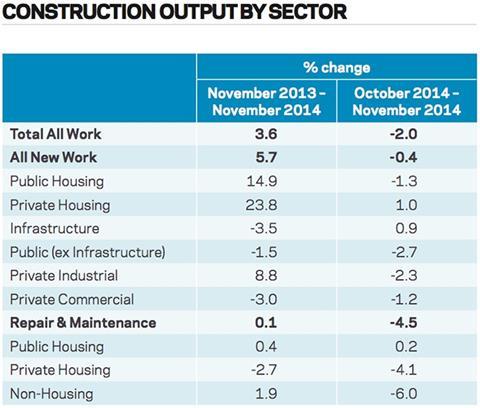 Contract values in the commercial & retail sector increased in 2014, indicating better prospects for this important sector. The sector had a much stronger year overall in 2014, with contracts awarded valued at £10.7bn, an increase of 26.9% from 2013. While 2012 and 2013 were broadly similar for contract awarded values, the significant increase in 2014 suggests that construction’s traditionally largest sector is set to grow in 2015. If construction growth is to quicken in 2015, a healthy commercial sector will be vital. London dominated the commercial contracts market in 2014, accounting for 41.3% of the value of contracts awarded, a slight drop of 0.3% in proportion of the total from last year (see Value of Contracts by Region, right and Map and Figures, below). Major contracts included the aforementioned Battersea Power Station development, and 10 Fenchurch Street in the City - awarded at a value of £420m and set to provide over 60,000m2 of office floorspace. Despite growth in the values of contracts awarded in 2014, the value of schemes reaching detailed planning stage decreased slightly to a total of £10.8bn (see Contracts at Advanced Planning, right). This is a 5% decrease from the value recorded in 2013 but is still significantly higher than the values recorded in 2012. This is consistent with the likelihood of continued modest growth in the sector in 2015. 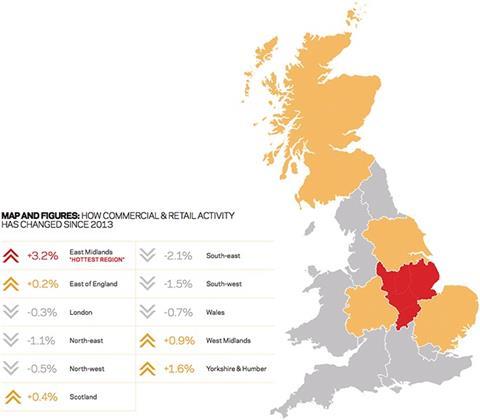 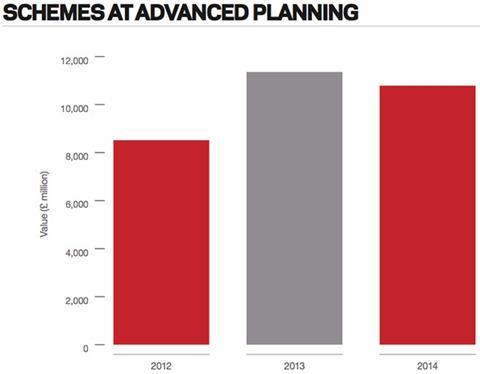 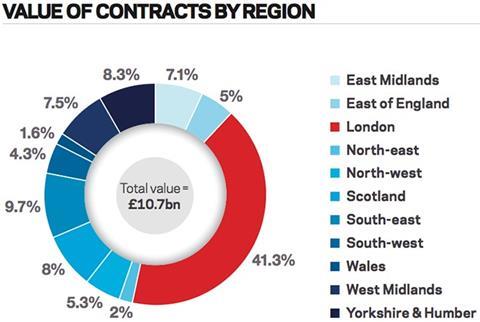 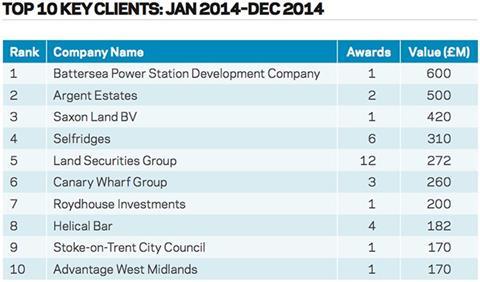 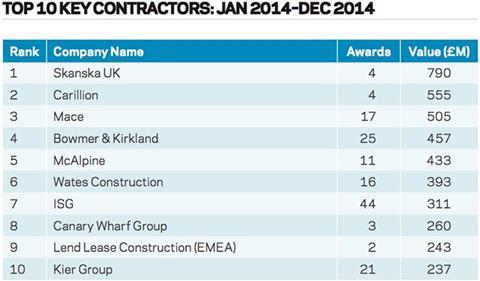