The Budget was released last month in what was the last major announcement before the General Election in May. It set the course of further austerity over the course of the next parliament with the projection that the UK deficit would be eradicated by 2018/19. The majority of headline measures focused on tax and savings with further increases in tax free allowance and tax relief on interest for savings accounts.

Within the Budget, the Office for Budget Responsibility (OBR) updated its economic forecasts for the UK in the upcoming years with its estimate for growth this year now 2.5%, a slight increase from the 2.4% forecast in the Budget. The forecast for 2016 was also revised upwards with an estimate of 2.3% growth, an increase from the 2.2% figure December. The OBR now thinks that growth will continue at 2.3% in 2016 and 2017 with a slight increase to 2.4% in 2019.

Inflation forecasts were also adjusted for 2015 from 1.2% to 0.2%, which is significantly below the target of 2.0%. The OBR’s inflation target of 2% is predicted to be met in 2019, two years later than the Autumn Statement predicted.

Average earnings showed slight improvements with the OBR revising its forecasts up to 2.3% wage growth this year, when it expected the figure to be 2% at the time of the Autumn Statement. Wages are therefore forecast to rise above the level of inflation this year and this is forecast to continue for the rest of period, with average earnings growth of 4.4% estimated in 2019.

Unemployment forecasts remained broadly similar in the Budget, reflecting the rapid fall in unemployment levels in recent months with an estimate of 5.3% this year, compared with 5.4% in the March Budget. Unemployment is set to fall to 5.2% in 2016 and settle at the long-term rate of 5.3% beyond that. These forecasts imply that inflation will be on target and unemployment will be at its “natural” rate in 2017, indicating a healthy economy. 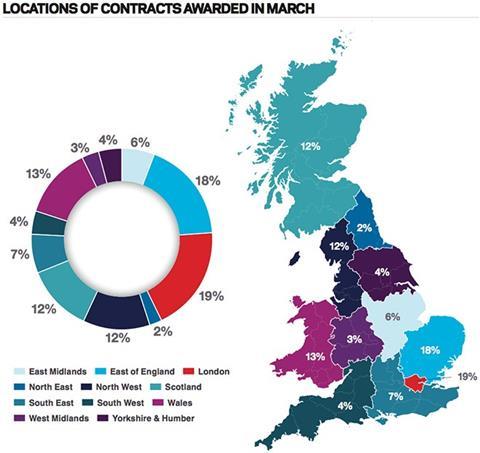 The Construction Products Association (CPA)recently updated its forecasts for 2015 and beyond and the construction industry is now predicted to grow by 5.5% this year and 4% next year on the back of continuing strength in the new build residential sector and increasing activity in the commercial and infrastructure sectors.

While this is welcome news for the industry it is important to note that it will be 2016 before the industry exceeds the levels of activity occurring in 2007 before the recession took hold.

Comparing February construction output levels with the same month in 2014 showed a decrease of 1.3%, the second month on month fall in succession. This fall was unexpected but it should be noted that the monthly figures for construction output are often volatile. That said, there certainly appears to be some evidence of a slowdown in activity at the start of the year.

It is clear that the main reason for the fall this month was the reduction in repair and maintenance activity across the industry. Total repair and maintenance declined by 1.4% in February compared with January and 4.3% on February 2014. There was a notable drop in private housing repair and maintenance output, down 2.7% on the month and 7.9% on the year. There was also a dip in the volume of new work with output down by 0.6% on the previous month but this was an increase of 0.5% on February 2014. While new private housing declined month-on-month by 1.6%, output increased by 7.9% compared with the same month in 2014. This highlights that the growth patterns within the industry are still reliant on private housing and broader improvements are needed to ensure a robust recovery.

March witnessed an increase in construction levels with the value of new contracts awarded £6.2bn

According to Barbour ABI data on all contract activity, March witnessed an increase in construction levels with the value of new contracts awarded £6.2bn, based on a three-month rolling average. This is a 10.5% increase from February and a 21% increase on the value recorded in March 2014. The number of construction projects within the UK in March increased by 2.7% on February, and were 10.3% lower than March 2014.

The majority of the contracts awarded in March by value were in London, accounting for 19% of the UK total (see opposite). This is followed by the east of England with 18% of the contract value awarded and Wales accounting for 13%. The largest contract awarded in London during the month was the Saatchi office development, which is a commercial-led scheme to deliver commercial office and residential units worth £150m at the Fitzrovia site. In the east of England the largest contract awarded was the A5-M1 Link (Dunstable Northern Bypass) to the Costain/Carillion Joint Venture and is valued at £217m. In Wales, the contract to construct the M4 Corridor around Newport was the largest awarded in March at an estimated value of £750m.

Infrastructure had the highest proportion of contracts awarded by value in March with 41% of the total. This is largely due to the award of the aforementioned road contracts in the east of England and Wales as well as a major Energy Park in Bedfordshire valued at £600m and the expansion of the Davyhulme wastewater treatment centre in Manchester valued at £171m. The residential sector accounted for 25% of the value of contracts awarded this month which was primarily driven by contracts in London but also comprised a major development contract in Liverpool to build 200 houses on the former Gateacre school site valued at £50m. 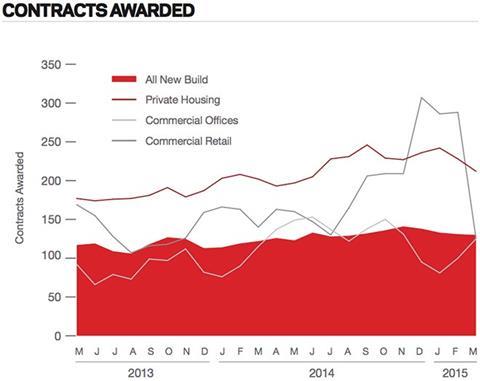 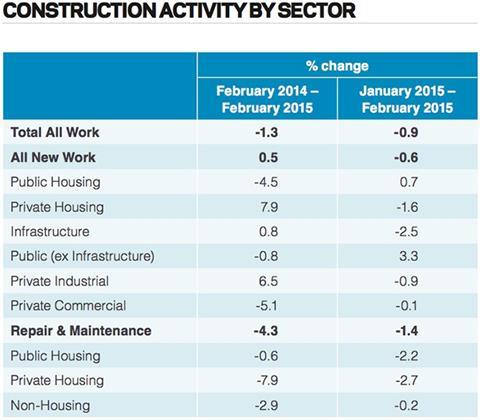 The main location of infrastructure projects this month was the east of England with 33.8% of the value, and this was 4.8% higher than March 2014 (see pie charts opposite). Wales also saw a large share of contract value in March with 28.5% of value awarded, a 26.6% increase from March 2015. The awards of two major road contracts in both regions account for this strong representation with the M4 Corridor project around Newport valued at £750m and A5-M1 Link at Dunstable which has a contract value of £217m.

A significant number of renewable energy projects means that utilities contracts were the dominant contract type in March with 41% of the total value awarded, although this was a 4% decrease from last year. Transport projects accounted for 40% of contract value, largely attributable to the aforementioned road projects in Wales and the east of England. 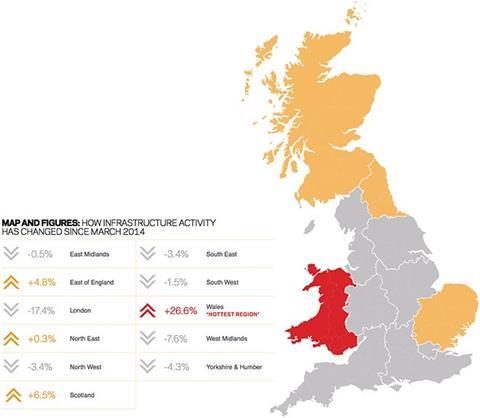 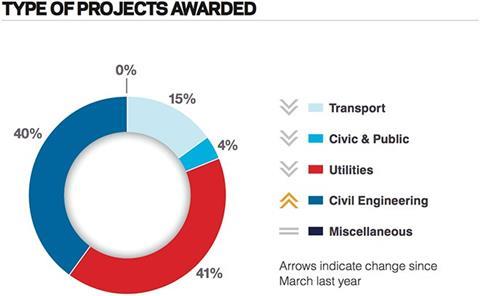 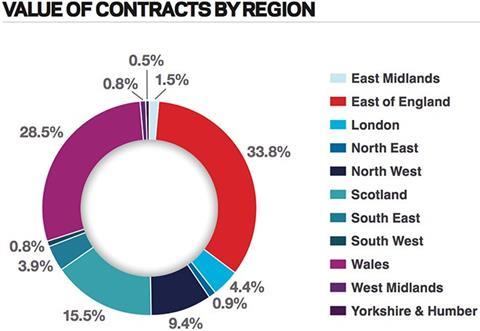 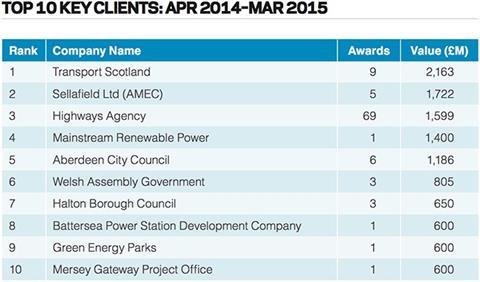 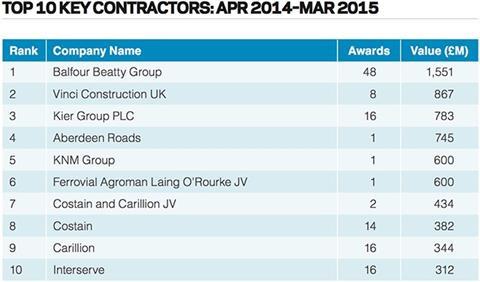