Market review: The season of goodwill

The Comprehensive Spending Review was delivered in the last month, which set the course for government spending for this parliament.

Seemingly having more political than economic importance, most of the headlines centred on what was not included, namely cuts to tax credits or the police budget. However, for construction there were some potentially important announcements including a proposal to increase capital budgets up to 2020 and a promise to build 400,000 homes. Infrastructure also received guarantees on major projects including HS2 and transport in London.

Inflation forecasts also remained unchanged for 2015 at 0.1%, but it is predicted to increase more sharply in 2017 to 1.8%, compared to 1.6% in the last Budget (see CPI inflation). Given that the Bank of England target is 2% it shows how far the economy is from a desired inflation rate at present. The OBR’s inflation target of 2.0% is predicted to be met in 2019 however, a year earlier than the summer Budget predicted.

Average earnings growth was revised up within this Budget with the OBR now forecasting 2.6% wage growth this year, when it expected the figure to be 2.2% when the summer Budget was announced. However, average earnings growth is not expected be as strong towards the end of the parliament with 3.9% growth forecast in 2020, down from 4.4% in the Budget (see Average Earnings, right).

The CPA updated its forecasts for 2015 and beyond and the industry is now predicted to grow by 3.6% this year and 3.8% next year

Unemployment forecasts remained broadly similar in the Autumn Statement, reflecting the rapid fall in unemployment levels in the last year with an estimate of 5.5% this year, compared to 5.4% in the spring Budget. Unemployment is set to fall to 5.2% in 2016 and settle at the long-term rate of 5.4% in 2019 (see Unemployment Rate Forecasts, right). These forecasts imply that inflation will be on target and unemployment will be at its “natural” rate in 2019, indicating a healthy economy. The many policy measures announced in the statement included:

The Construction Products Association recently updated its forecasts for 2015 and beyond and the industry is now predicted to grow by 3.6% this year and 3.8% next year on the back of continuing strength in the new build private residential sector and increasing activity in infrastructure sector.

While this is welcome news it is important to note that it will be 2016 before the industry exceeds the levels of activity occurring in 2007 before the recession took hold.

According to Barbour ABI data on all contract activity, November witnessed an increase in construction activity levels with the value of new contracts awarded £7.9bn, based on a three-month rolling average. This is a 7.2% increase from October and a 37.6% increase on the value recorded in November 2014. The number of construction projects within the UK in November decreased by 27.9% on October, and were 6.1% lower than November 2014.

Projects by region
The majority of the contracts awarded in November by value were in London, accounting for 44% of the UK total (see Locations of Contracts Awarded). In London, there were further contracts awarded as part of the Thames Tideway Tunnel with another set of main works valued at £800m. The Tottenham Hotspur stadium development also reached contract award stage in November, with a projected value of £400m, when it was announced that Mace would be the contractor. There were also two large commercial contracts awarded in London in November with the office-led 40 Leadenhall Triangle awarded to Mace at a value of £390m and Ten Bank Street at Canary Wharf, which is valued at £325m. This spread of contracts reinforces London as the main location of construction activity within the UK and with major infrastructure, commercial and residential projects in the pipeline this is likely to remain the case. 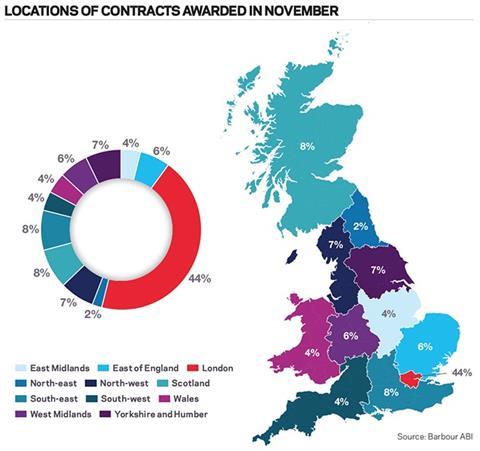 Spotlight on hotels, leisure and sport

Two major stadium contract awards boost performance in this sector after subdued activity recently. Contract award levels in the hotel, leisure & sport sector were £405m in November, based on a three month rolling average. This was 107.4% higher than October but 29.5% lower than November 2014. In the three months to November the value of contracts was £853m, which was 3.1% lower than the previous three months. This was a decrease of 43.6% compared to the same period in 2014 indicating a longer term decline over the past year.

Projects by region
London had the highest share of the hotel, leisure & sport sector contracts accounting for 67.4% of the value awarded, a 27.4% increase from November 2014 (see Type of Projects Awarded and Value of Contracts by Region). Two contracts in particular account for London’s share in November. The new Tottenham Hotspur stadium valued at £400m and the Number 1 Court redevelopment at Wimbledon valued at £150m were both awarded in the month, hence the high share in London.

Type of projects
These two contracts also mean that arenas / stadiums accounted for the highest proportion of the types of contract awarded in November with 63% of value, which was also a 63% increase from November 2014. 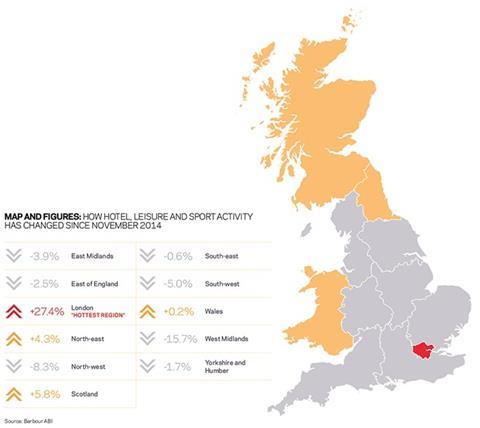 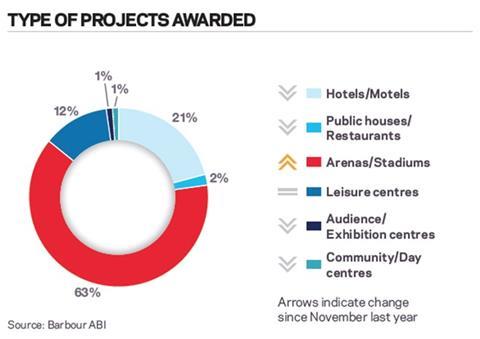 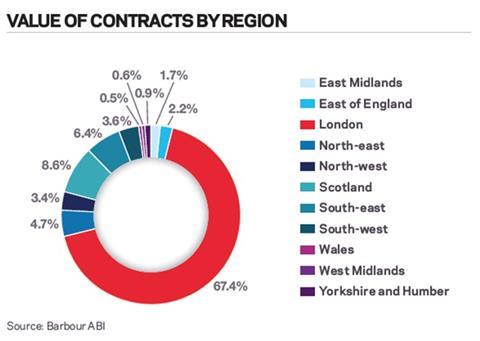 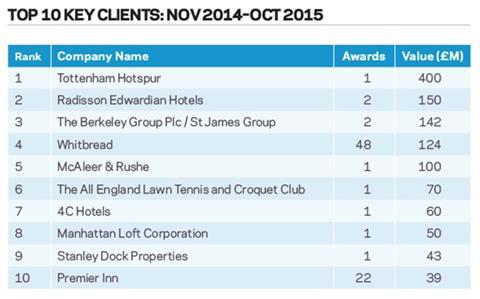 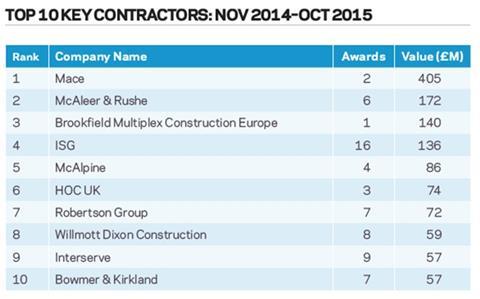