The recovery is still moving at a slow pace but August saw a year-on-year increase in construction awards. Michael Dall presents highlights of Barbour ABI’s latest monthly Economic & Construction Market Review, with a special focus on the commercial and retail sector

The detailed results showed that the service sector and production sector expanded in the quarter, but that construction was flat and agriculture declined by 0.2% (For the full Economic & Construction Market Review click here). However, it is only the service sector which is back above its pre-recession peak.

Analysing the pace of recovery from this recession compared to previous recessions indicates the comparatively longer time it is taking for the UK to recover than in the past. At the same point in the last recession in the early 1990s the economy was 15.7% larger than at the start of the downturn, compared to just 0.2% at present.

At the same point in the last recession the economy was 15.7% larger than at the start of the downturn, compared to just 0.2% at present

The level of government debt as a percentage of GDP is still significantly higher than pre-recession levels. Public Sector Net Debt now stands at 76.5% of GDP in July 2014 whereas in January 2008 it was 35.7%.

The latest forecasts from the Bank of England predict that GDP growth will maintain at 0.8% in Q3. The Bank is also confident that there is significant slack in the economy allowing it to grow without rapid inflation. It maintains the view that business investment will increase this year and there is some evidence of this in official statistics. If business investment does maintain its increase the longer-term outlook for UK economic performance will be substantially improved.

The latest Bank of England Inflation Report painted a broadly positive picture of the UK economy. It highlighted the continuing improvement in output and unemployment and noted that business investment levels are increasing. However, it also noted that productivity and wage growth remain weak and it is unsure of the reasons or the extent to which this will endure. It is Barbour ABI’s view that the near-term outlook for the UK economy is good but addressing the productivity puzzle will be vital in ensuring sustainable economic growth.

Comparing output levels with July last year showed an increase of 2.6%. It is evidence of the improving performance of the sector but notable that longer-term growth is not as high as in previous months.
It is clear that the housing sector is the main component of growth within the industry (see Construction Activity chart, below). Private housing increased by 1.1% between June and July 2014 and 15.9% from the corresponding month in 2013. At the same time public housing, while down from June 2014, was 30.1% higher than last year.

The ONS/Barbour ABI New Orders for Q2 2014 showed that total order levels increased by 3.8% between Q1 2014 and Q2 2014 but were 5.3% lower than a year ago. There was a surprise yearly fall in the levels of private housing compared to a year ago. The levels of infrastructure contracts also fell significantly. This was partially offset by increases in private industrial and private commercial contracts.

The CPA/Barbour ABI Index ,which measures the level of contracts awarded using January 2010 as its base month, recorded a reading of 129 for July (see Contracts Awarded, below). This is a slight increase from last month and continues to support the view that overall activity in the industry remains strong. The readings for private housing remained strong. However, the reading for commercial offices fell with a reading of 122 this month, but commercial retail increased and reported a figure of 160.

According to Barbour ABI data on all contract activity, August witnessed an increase in construction levels with the value of new contracts awarded £5.3bn, based on a three-month rolling average. This is a 4.9% increase from July and a 16.6% increase on the value recorded in August 2013, an indication of a stronger summer for construction this year.

The number of construction projects within the UK in August decreased by 22.4% on July, and is 0.4% lower than August 2013.

The majority of the contracts awarded in August by value were in the London and the South-east, which accounted for 30% and 12% respectively of the UK total (see Locations of Contracts Awarded, below). The main reason for this was the £420m Fenchurch Street commercial scheme in the City of London. In the South-east the major project awarded this month was the commercial scheme the Botley District Centre in Oxfordshire, valued at £100m.

Residential had the highest proportion of contracts awarded by value in August with 30% of the total (see Locations of Contracts Awarded, below). This demonstrates the continuing strength of the residential sector within the industry. The commercial and retail sector also featured prominently this month accounting for 26% of the total value of all projects with infrastructure (16%) and education (14%) the next highest sectors this month by value of contracts awarded. 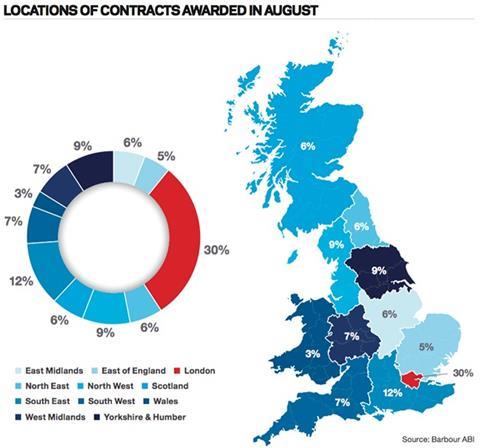 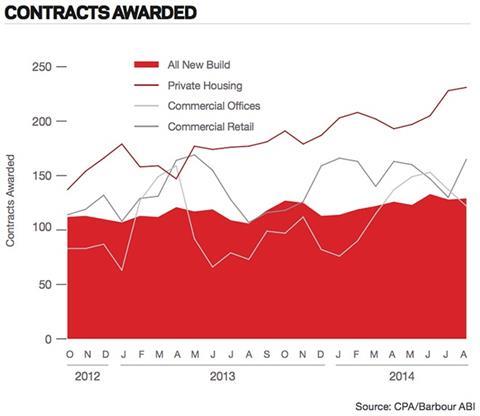 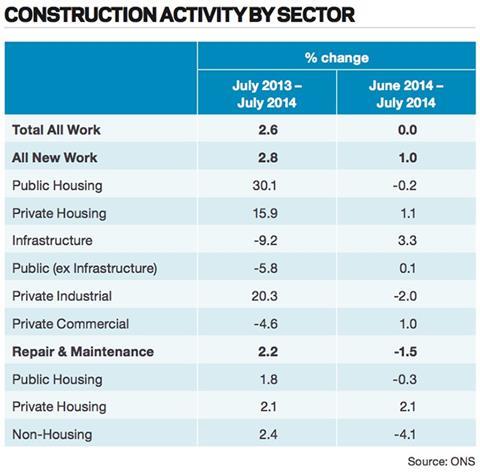 Spotlight on the commercial and retail sector

The value of contracts awarded in the commercial and retail sector was £870m in August based on a three-month rolling average. This is a 17.4% increase from July but a 95.8% increase from the August 2013 figure. In the three months to August the value of contracts was 0.4% below the previous three months and 28.1% higher than the same period in 2013.

London was the main location of activity in the sector this month with 54% of the value of all contracts awarded, although this was 37.5% higher than August 2013 (see Value of Contracts, below & Map and Figures, below). The major project in the commercial sector this month was 10 Fenchurch Street in the City of London valued at £420m.

Offices were the dominant type of project in the sector accounting for 71% of the value of contracts awarded this month, and this was a 17% increase on August 2013 (see Value of Contracts, below). General retailing is the other significant sector with 23% of contract award value, which was a 5% drop from the August 2013 figure. 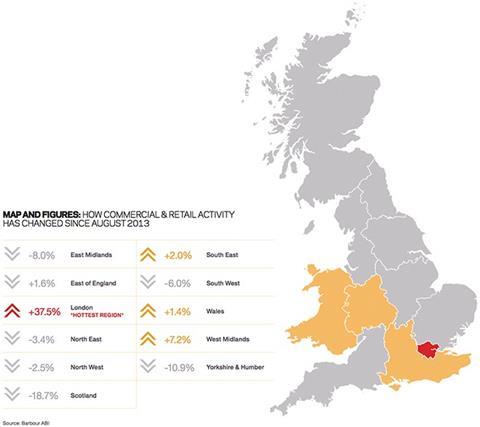