Market forecast: Carry on regardless

Tender price index ▲
Tender prices increased in Q1 2017 by 5% provisionally versus the same time a year earlier. More upside risks to the outlook are expected through 2017 than last time.

Retail prices index ▲
The annual rate of change was 2.9% in Q1 2017. This increased rate of change stems from domestic inflationary pressures, primarily brought about by weaker sterling.

Carry on regardless. The UK construction industry certainly has, maintaining notable growth rates and posting high output numbers. This is against a backdrop of a relatively buoyant UK economy, with forecasts expecting higher economic growth in 2017 than previously thought. The global economy continued to hold up out of 2016 and into 2017 as well, with overall prospects expected to remain sound. This said, uncertainty endures on the global, European and domestic stages, largely stemming from geopolitical issues. Worries on international trade and related policies have increased too.

With a snap general election called in the UK, domestic policy-making is unlikely to affect construction activity with upside benefits in any meaningful way over the next few months. Risks are to the downside over the short-term given the hiatus in government machinery. In reality, this hiatus is likely to run into an extended period, unless there is concerted and concentrated effort to keep a focus on domestic policy-making all the while Brexit negotiations pull on government resources.

Existing momentum in construction activity then will see it carry on through the summer. Looking further out, even with £23bn productivity-related spending announced in the last Autumn Statement, some of which should help construction, the UK economy is set to face headwinds from budget cuts in coming years, not to mention the risk of any adverse fallout from the UK leaving the European Union. A farrago of issues – unfinished budget deficit reduction, a cyclical slowdown, Brexit fallout – will begin to exert more influence on the direction of construction activity.

Brexit remains a major talking point – but that is mostly what it is, in the absence of any substantive negotiations commencing. Some starting positions are emerging. However, it is still unclear whether Brexit is a tipping point that presages larger change, or a challenging period over the medium-term. Future risks to monitor for UK construction delivery will relate to EU labour market access and possible tariffs on materials and components.

Impacts on labour supply – certainly that which can be regarded as flexible, mostly from the EU – will add focus to the problem of overall labour supply and corresponding skills. Any hint of future labour market restrictions will, plausibly, lead to an early scramble to secure already scarce industry resources – both trade and professional skills.

Overall construction market sentiment across the country retains a core of very positive sentiment. Enveloping this core sentiment are further degrees of positivity, and some fluctuating views either side of neutral. Moreover, commercial behaviours among main and trade contractors are little changed from the signals and actions of recent years. They continue to favour repeat business with trusted clients in sectors with which they are familiar. Attractive projects are low risk and high-certainty, often with planning approval already secured, and a realistic budget given recent inflationary pressures. Procurement challenges have eased a little as cost plans have generally caught up in most areas.

Regional variations also add more hue to the picture. Where large infrastructure projects have started or are building out within a UK region – Hinkley and the South-west for example – there are likely to be market distortions as competition for resources heats up. This is on top of an already robust market to secure resources anyway. Resource issues are creating real impacts to project delivery.

Further risks persist from imported input cost pressures brought about by currency changes, along with underlying demand for materials and components. Though this latter point stayed ever- present in recent years, foreign exchange changes merely added to the pressures in Q4 2016 and Q1 2017. It is likely that delayed impacts from foreign exchange changes will eventually feed through in 2017. Designs and specifications will need further scrutiny if cost pressures from imported materials and components push budget limits.

Capacity constraints are evident still. Any easing here will emerge more slowly because of the prevailing tightness in the construction labour market. More broadly though, does contractor diversification introduce additional constraints to sector capacity by removing capability and resource? Are price levels therefore supported that might otherwise see downward pressure in a slower sector marketplace? The old rules to appraising the future direction of industry trends and corresponding price levels may not then apply to the same degree as before because of the changed labour market dynamics.

Higher targets for profit and margins are evident too. Providing these can be sustained, higher margins are necessary to address one of the structural issues of the industry: namely, prolonged underinvestment in skills and training. The symptoms and the causes for the present shape of the industry are now seemingly interchangeable. Fragmentation of the supply chain, a culture where the lowest price often wins, two major downturns in which many people left the industry and were not replaced, and high levels of retirees in coming years are all major contributors to industry constraints.

Paradoxically, and with strategic focus, Brexit may be the catalyst to address the enduring issues in the construction industry. In the meantime, the longer-term impacts of Brexit are still difficult to quantify, and there is still a need for construction to access the single labour market. With a skills shortage and demand for many trades high, any limitations introduced over the near-term, or even indicated to be implemented, will compound the skills crunch.

All work construction output nudged higher in Q1 2017 versus Q4 2016. However, the level of growth was underwhelming at 0.2%. A rolling three-month average makes the yearly rate of change look more respectable at 1.8%. Although the monthly change at March 2017 increased by 2.4% versus the same month in 2016, the new figure does mark the third consecutive decrease in the month-on-month trend. Continuing month-on-month declines could be cause for concern.

All sectors now display slower or slowing trends of yearly change for new work. Only the public other work and public housing sectors posted an improving picture over the year on a three-month moving average basis. But this is not necessarily grounds for optimism in view of the public sector’s diminished output trend from 2010 onwards. The private housing sector is that to watch, given its importance to industry output over recent years. Having posted its highest quarterly output volume for 20 years in Q1 2017, if this sector slows, there will be tangible effects to the industry – and with higher uncertainty in the background. This would be significant as it was the engine of construction industry new workload for so long.

Build UK’s last State of Trade report underscored relative bullishness in the industry, yet caution lurked in the background. Enquiries and output dipped over the winter, but main contractor and trade contractor respondees believe that, on balance, 2017 will be a good year. The survey continues to reference similar themes to those covered and expected in many previous Market forecast articles: construction firms operating at or near full capacity; recruitment still a problem, with flow-through effects on labour costs and project delivery; and bidding for work hindered by a lack of skilled resource. On the issue of skills constraints, which applies as much to consultancy skills as those on the delivery side, the need to retain and train staff will become more central to meeting longer-term business objectives.

Economic indicators and business sentiment surveys mostly retain a positive overall position. Consumer confidence has fallen, primarily due to a squeeze on incomes brought by weaker sterling and higher inflation, though economic activity generally remains sound. The preliminary estimate of UK GDP for Q1 2017 at 0.3%, while positive, was the lowest quarterly value since the same time a year earlier. The slower growth rate was attributed to the services sector, which adjusted from 0.8% in Q4 2016 to 0.3% in Q1 2017. Importantly, construction grew by 0.2% between the quarters. The CBI Industrial Trends Orders recorded a good Q1 2017, as export orders for manufactured goods increased at the fastest pace in six years. Orders from outside the EU rose at a record rate.

Many construction-specific surveys join these favourable broader indicators too. The RICS, Federation of Master Builders’ survey, and a range of other surveys report good activity levels, with a promising outlook for the coming year. 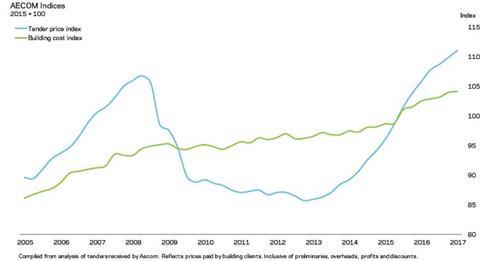 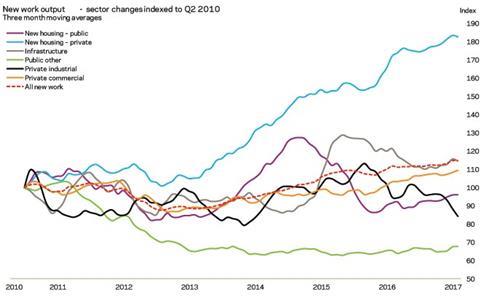 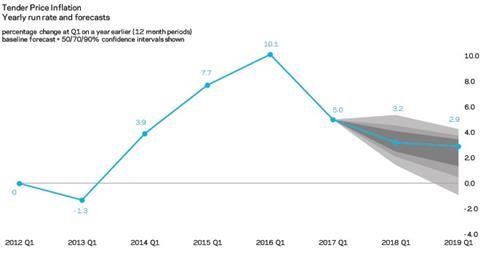 Recent price increases have experienced greater upwards pressure from rising input costs. Demand-side and supply-side factors are combining to produce conditions in which the probability of price falls over the short-term are very slim. Producer price indices have moved up at a clip in recent quarters, as prices for materials and fuels consumed by UK manufacturers rose by 17.9% over the year to March.

Building materials costs increased by 6.5% between Q4 2016 and Q1 2017. There is variance in price changes across all materials classifications.

Double-digit increases were recorded in manufactured items such as door/window furniture, metal products, fixings (probably because nearly all are imported) and insulations. Masonry and plastic products have moved 5% and -0.5% in the same period respectively. For commodity prices generally though, some of the rises seen last year have started to unwind after markets digest marginally weaker Asian economic data, dented expectations after the Trump market rally and higher supply levels and inventories for oil.

Construction labour rates are over 2% higher on the year at Q1 2017. Although there was a tail-off in the rate of change at the end of 2016, wages found a footing going into the new year. With some sideways drift during the first quarter, wage levels have not shown signs of falling again, with the consequent annual change up over the 2% mark presently.

Combine this support for wage levels with materials cost increases, and there remains pricing pressure for the supply chain. With a backdrop of sound order books resulting in a respectable outlook for 2017, the probability of price trends moving higher is more likely than not.

Domestic inflation has cemented a headline position on the economic landscape now after the falls in sterling last year. Protracted sterling weakness makes the scenario of domestic inflationary pressure more likely to continue. The knock-on to construction is now more discernible across more supplier categories. Suppliers have ridden out the possible time to absorb the foreign currency exchange changes in Q3 last year, and these commercial decisions add pressure to the construction value chain and pricing.

Trends in other tender additions are unchanged. Approaches to risk remain hawkish, especially if trying to procure early and, or perhaps, with limited design information. Fixed priced allowances are often higher for some trade packages than prevailing rates of price inflation generally.

Aecom’s baseline forecasts for tender price inflation are 3.2% from Q1 2017 to Q1 2018, and 2.9% from Q1 2018 to Q1 2019. Upside risks to pricing have increased since last time, reflecting the demand and supply-side pressures persisting across the industry. Some downside risks endure though, across the first forecast period. Further, a greater balance of risks to the downside are expected for pricing across the forecast period Q1 2018 to Q1 2019. This period is when Brexit negotiations will be in full swing. Over a longer timeframe, the balance of risks evens up more, primarily to reflect the likelihood that the UK will know its future destiny by then, for better or worse.

The price forecasts are based on key assumptions: construction output continues similar trends over 2017 but flattens out in 2018; order books remain firm though uncertainty begins to increase in the second half of 2017 and into 2018; Brexit-related uncertainty increases over the medium-term; prevailing trends in government capital expenditure are not substantially changed in the short-term; and sterling continues to strengthen slowly.