Tender price index ▲
Tender prices increased in Q2 2017 by 3.4% provisionally versus the same time a year earlier. More upside risks to the outlook are expected through 2017 than last time.

Building cost index ▲
Building materials cost inflation is up over the year at 3.9% in Q2 2017. Both labour and materials percentage increases are elevated.

Retail prices index ▲
The annual rate of change was 3.7% in Q2 2017. Measures of domestic inflation have increased over the last year significantly and are forecast to remain elevated.

Construction data – both hard and soft – remains consistently inconsistent. The construction market’s reaction to Brexit in the hard, or official, data was negligible. Yet construction sentiment surveys – soft data – recorded sizeable adjustments at each of the notable events in the last year. A pause or delay on one project (some super-prime residential, for example) has not always been reflective of its broader sector that has stayed the course (mid-range residential projects).

Likewise, when it comes to regional construction activity, one region’s new data is not mirrored elsewhere in the UK. The same often applies in data releases for UK-wide economic sectors too. The one thing that has remained consistent across all UK economic measures for some time though is a theme of uncertainty. It is mentioned with increasing regularity in formal and informal settings.

Overall construction activity is slowing, despite monthly and sectoral fluctuations. This doesn’t tell the full story as output levels posted record highs in early 2017 – output is therefore slowing from this high point. The related aspect to this downward trend in construction workload is a concurrent broader cyclical economic slowdown across the UK. The fortunes of the domestic economy and UK construction are usually very closely correlated. Official economic data shows the UK’s growth slipping, just as the Bank of England and Moody’s issue louder warnings in respect of the UK’s private debt load. Recently revised forecasts for the economic outlook by the International Monetary Fund (IMF) for slower growth through 2017 and into 2018 sully the outlook further.

Despite the gloomier prognosis, construction market sentiment across the UK remains generally positive, although this is likely more reflective of the near-term. Contractors of all sizes maintain that 2017 will be a good year for activity, with 2018 looking reasonable so far. Commercial behaviours are stated to follow similar trends as those of recent years but not necessarily for the same reasons - at least in respect of tender prices. Whisper it, but there is an increasingly real scenario of stagflation, or something close, for construction.

The significance of the election result should not be overlooked, as it brings deficit reduction politics towards the centre of domestic discussions. What might be less conducive to addressing the UK’s finances over the short to medium-term in the view of some, could be good for UK construction. The option to adjust fiscal levers may feature more highly, bringing about increased spending on infrastructure and construction. With strategic oversight, UK productivity could get a leg up. Whether any higher fiscal spending is through new money or catalyst effects to bring about private investment may become clearer over the course of 2017 and into 2018. On the other hand, the UK government could maintain its current fiscal position and construction will not receive a boost, with implications for the UK’s productive capacity.

As the early Brexit negotiations take place, some clarity is emerging on the positions of each side. Certain inferences can be drawn on the impacts for the construction industry. UK construction delivery risks are still present in relation to EU labour market access and importation of materials and components. It is a reasonable assumption that construction workers are among the 117,000 EU nationals who left the UK in 2016, an increase of 35% on 2015 (Office for National Statistics Migration Statistics Quarterly Report May 2017).

If this migration pattern becomes more pronounced, combined with any future labour market restrictions, then higher demand to secure increasingly scarce industry professional and trade resources may follow. Apart from adding to operational risks and upward pressure to salaries and employment costs, this scenario exposes the structural issues of the construction industry. Business strategies then become harder to deliver because of risks around securing resources.

Recent news stories remind us that main contractors are still working to improve their financial positions. This is happening while most, if not all, of their input costs have been or are increasing. Skills constraints are part of the reason, as wage and salary growth rose markedly.

Upward pressure from input costs compresses financial headroom which is, in turn, constrained by output prices that can be secured for construction work.

A phrase coined in the election campaign, the JAMs - those who are “just about managing” - is equally applicable to numerous construction firms. Building’s recent report into the financial performance of main contractors highlights the persistence of low margins for parts of the industry (“Contractors still struggling to hike margins over the 2% mark”, 28 July 2017, page 9). This is despite record levels of output in recent years. Seemingly, some of the business issues around tendering and market timing are becoming perennial risks for firms.

While unit prices remain at similar prevailing levels, this reflects the influence of main contractor supply chains on underlying output price trends. Because of the present uncertainty in respect of Brexit, there is residual risk avoidance among main contractors. It is easier, understandable even, to transfer risk in a more uncertain environment. 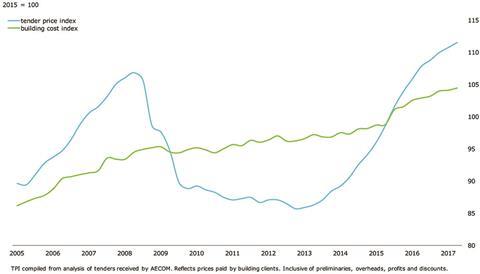 Construction prices rose over the year at Q2 2017 provisionally by 3.4%, according to Aecom’s tender price index. The yearly rate of change recorded at Q1 2017 is revised downwards to 4.6% from the provisional figure of 5% reported in the last Market forecast. Recent price increases have been driven by the same demand-side and supply-side factors of late but, tellingly, now to a lesser extent. Watching for an inflection point, will be key where, in the price equation, supply-side factors weigh to a greater extent than those on the demand-side of the price equation.

Price support is still in evidence from input costs. Building materials costs increased by 3.9% between Q2 2016 and Q2 2017. Price movements between Q1 2017 and Q2 2017 were relatively slim though, indicating a slight hiatus in the rate of increase. Nevertheless, the largest increases between the first and second quarters of 2017 were in paints (nearly 4%), insulation (over 2%) and clay drainage (almost 2%).

Some respite is seen in commodity prices, which continue to unwind after the price rebounds seen in the second half of 2016. Producer price rises have eased too in 2017, as prices for materials and fuels consumed by UK manufacturers rose more slowly by 9.9% over the year in June. Crucially, almost all main and trade contractor firms expect to see increasing materials and input costs for their work remaining a key management issue this year.

Long-term skills shortages, compounded by rising cost pressures, increase the likelihood of contractors passing on higher prices to buyers of construction work - at least if overall workload holds up and does not fall sizeably and abruptly. The fly in the ointment is that these upwards cost and price pressures might conspire to remove some client-initiated demand from the market. Activity will find a level and although recent trends in official data point to a falling output trend, because all firms have been stretched for some time now, a reduction in activity might still feel like firms are busy. As input costs and output prices evolve, so do the commercial signals in the market place. Evidently, there is growing tolerance for parts of the supply chain to fix prices for defined periods of time, which was one of the sources of commercial negotiation in recent years.

Construction labour rates are over 3% higher on the year at Q2 2017. The pace of wage inflation in the trades picked up marginally from Q1 2017, underlining the robustness of demand for all trades. Within the trades there is some monthly and quarterly variation in average rates of change; nevertheless, taken in the round, the sun is still shining for construction workers, particularly as real wage levels in the economy more broadly are now falling due to higher consumer price inflation.

Domestic inflation is expected to continue as a feature of the economic picture over the short-term and into 2018, even though sterling may strengthen moderately against its major currency pairs. The flow-through effects to construction will mean ongoing pressure for suppliers to maintain or increase the prices of construction inputs: namely components and materials.

Aecom’s baseline forecasts for tender price inflation are 3.3% from Q2 2017 to Q2 2018, and 1.7% from Q2 2018 to Q2 2019. Upside risks to future pricing are higher this time, reflecting the demand and supply interactions still in evidence across the industry. Pricing over the last 12-month period has been to the upside of many published baseline forecasts this time last year. Price expectations for the second forecast period are lower, as political events are expected to act as a drag on the UK economy and construction.

Reflective of this, a greater balance of risks to the downside is expected over this period. The full extent of Brexit will almost be clear by this point, and is likely to create increased turbulence before some calm returns. The loud thunder and small raindrops we described for Brexit last year might now see a change in that outlook.

The price forecasts are based on key assumptions: construction output is relatively sound over 2017 but continues a downward trajectory overall; contractor order books can be filled but with more flexibility in the accepted commercial terms; Brexit-related uncertainty increases over the medium-term; prevailing trends in government capital expenditure are not substantially changed in the short-term; and sterling slowly strengthens but is subject to ongoing volatility.