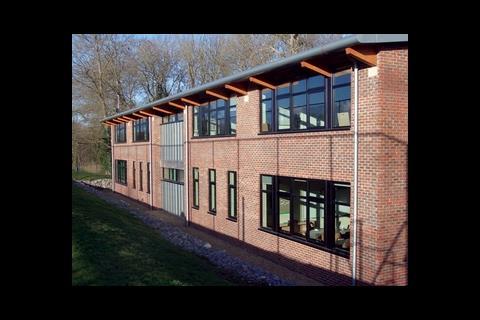 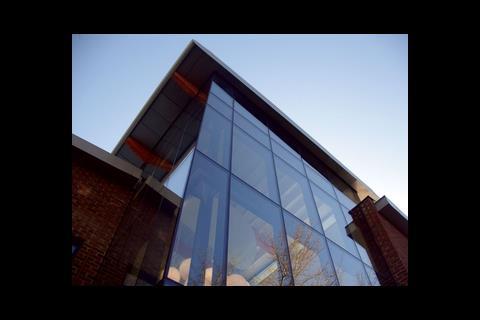 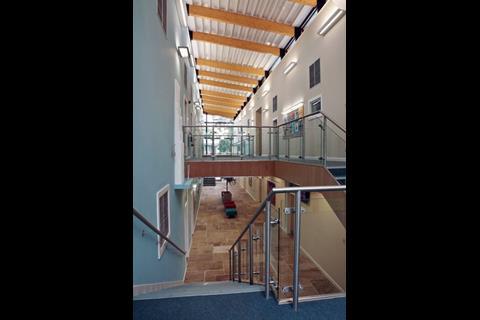 Port Regis school is the first use of an atrium-based E-Stack system in a multi-classroom situation. 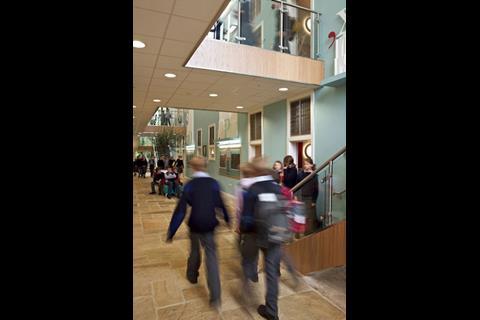 It takes a brave school management team to allow architects to design an unproven technology into their buildings, no matter how impressive the provenance. Port Regis school in Dorset is, however, already seeing the benefits of incorporating a low-energy ventilation system, developed by Cambridge University engineering experts, into a new block of 14 classrooms.

The two-storey building is designed around an atrium that is part of the ventilation system. Measurements taken since the classrooms opened last September show that the low-energy E-Stack ventilation system looks set to save 15MWh more heating a year than a conventional natural ventilation system could achieve for the building – equivalent to about 50kWh/m2/yr. Emissions data shows that classroom CO2 levels have remained well below 1500ppm for most of the occupied time.

The block was designed by Shaftesbury-based architect Philip Proctor Associates, which has a reputation for low-energy, low-maintenance buildings. It worked with E-Stack, a spinout company from the BP Institute at Cambridge University, which saw the project as an opportunity to take its low-energy ventilation system to another level.

Brian Watts, the architect responsible for the classroom block, admits to some trepidation early on: “The challenge was to design and supply a low-energy ventilation system that integrated the atrium with the classrooms while maintaining acoustic isolation of the individual rooms,” he says.

“The E-Stack, patented in 2006, had been used only in a single-classroom environment previously, but the company’s plans for developing an atrium-based ventilation system were well advanced, funded by BP and the Carbon Trust, and we were impressed with the commitment of the Cambridge team. Nevertheless, it was a considerable step from modelling

to full-scale implementation.” Professor Andy Woods of the BP Institute, a founding director of E-Stack, says: “In multistorey, multi-classroom buildings centred on an atrium, there are opportunities for system integration that provide additional functionality, such as the redistribution of heat between classrooms with different internal loads.

“We developed a scheme which involves convectively mixing outflowing and incoming ventilation air within the atrium in the colder months, thereby naturally recycling the internal heat gains through the ventilation system, while in warmer months the atrium provides an outflow ventilation stack. To maximise the benefits at Port Regis, we used modelling to determine sizes for window openings and exchange flow vents and converted the findings into an engineered physical system for manufacture and installation in the building.”

The strategy involves natural up-flow displacement ventilation (Figure 1a, above left) in summer conditions (external temperature >18C), with air entering via classroom windows, venting through transfer units into the atrium, and being exhausted from the top of the atrium. This maximises the buoyancy head available to drive the flow and flush out heat generated in the building in warm conditions.

In winter, the design is based on using mixing ventilation through the top of the atrium (external temperature <18C). Cold air enters through some of the high-level openings and the warm atrium air ensures it is preheated before reaching floor level. CO2 sensors control the rate of supply of fresh air. The mixing mitigates the potential for cold draughts in the occupied part of the atrium (Figure 1b). Some of the warm atrium air is vented from the space through other high-level openings, allowing for effective ventilation and maintenance of high-quality air in the building.

E-Stack tested this innovative design in an analogue water-bath model (Figure 2) to ensure the principles would work, and that the location and size of the clerestory openings atop the atrium would provide sufficient ventilation and mixing inside. The team also developed a dynamic thermal model to establish the ventilation rates necessary to achieve comfortable conditions and a satisfactory supply of fresh air, as well as determining heating required in the coldest weather conditions (external temperature <6C). In winter, the heating system is used early in the morning to pre-heat the space and is turned off as the occupant-generated heat load builds up.

Woods, who developed the modelling system, is pleased with how it transferred to the Port Regis scheme: “In February, when snow was thick on the ground, data showed the system was operating very effectively, with classrooms and the atrium remaining warm while the exterior was much colder.

“The project showed how simple and general principles relating to energy efficiency can be developed into engineering schemes for real buildings that can lead to a considerable reduction in energy consumption while also providing comfortable interior environments.”