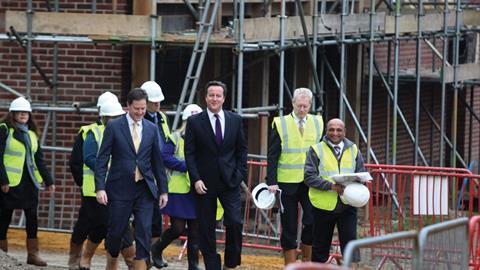 The government’s £1bn scheme to guarantee the return of 95% loan-to-value mortgage deals could see the number of homes built increase by more than 15% a year, as deposits required from buyers plunge by tens of thousands of pounds.

The agreement, the centrepiece of the housing strategy launched on Monday, has been warmly welcomed by housebuilders, with one developer even saying that it could increase the rate of supply by up to 25-30% per year from 2013 onward.

One housebuilder chief executive said he was working on the basis it could increase its volume by 10-15% in the first full year of its operation. The deal, which will see housebuilders put 3.5% of the cost of a house into a contingency fund to cover losses for the lenders, has the support in principle of mortgage lenders representing 80% of the market.

Pete Redfern, group chief executive of Taylor Wimpey, said the mortgage scheme was “what the industry has been waiting for.” He said that compared with shared ownership the product did not tie up too much capital, meaning it would not limit development: “It will work because it’s straightforward for the consumer, it doesn’t involve only owning part of a house, or guarantees from mum and dad. For the housebuilder, some of the 3.5% can be absorbed as we generally offer some incentives to buyers anyway.”

Nick Jopling, executive director at developer Grainger, said housing starts could increase by up to 30% a year from 2013, with analyst house Panmure Gordon estimating it could increase volumes by 10-15%. Taylor Wimpey, Barratt and Crest Nicholson all announced this week that they have started pre-registering potential buyers for the scheme, despite the fact it is not expected sales will materialise until the early spring selling season.

More than 25 housebuilders have expressed interest, although each has to strike their own deals with banks to offer mortgages on the homes.

Roger Humber, strategic policy advisor to the House Builders Association, said he was concerned that the big listed firms will hoover up all of the £1bn capacity for the mortgages.

Other measures included in the housing strategy were: