2
A cast of thousands
News

A cast of thousands 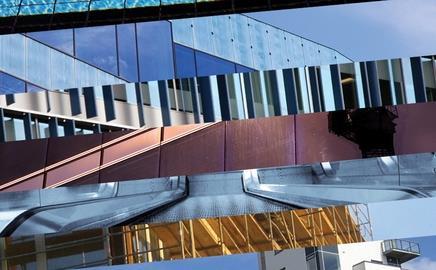 The trend towards retail-led, mixed-use schemes in city centres can be an organisational nightmare. With as many as 40 parties involved in some schemes, they need strong leadership, close collaboration and a lot of very careful planning.

How many organisations does it take to build a shopping centre? Well, if you’re talking about Grosvenor’s £900m Liverpool One development, the answer’s 42.

First you’ve got the masterplan team of four, led by Building Design Partnership. There are five property and planning consultants, one cost consultant and no fewer than 24 architects. It’s going to take the might of three construction giants, Laing O’Rourke, Balfour Beatty and Kier, to build all 1.6 million ft2. Then there’s the client, Grosvenor, and Liverpool council and if it all gets out of hand, three law firms too.

It’s an extraordinarily complex structure, but then projects like Liverpool One are much more complex than retail developments of old. The enormous 42-acre site will include six districts across 22 sites, each with its own character offering a blend of shops, homes, offices, hotels, transport facilities, parking and large public spaces. It’s due to open next year, as Liverpool becomes European Capital of Culture, and client and council intend it to be a major building block in the city’s renaissance.

But for the firms involved in building it, there’s many a headache on the way, and as planning laws and regeneration ambitions make mixed-use developments the norm rather than the exception, it’s going to make construction a much more challenging business for everyone.

“With a town centre development, it’s not just plonking a box down, there is a network of existing occupiers and it’s a site acquisition process,” says Richard Barkham, group research director at Grosvenor. “A box is easy. This has 32 separate buildings. We relocated underground car parks, public transport, a fire station. You need an extremely capable project manager who is adept politically, you need regular stakeholder meetings and you must keep interest groups informed.”

More companies rather than less will be the norm in future, believes Andy Speight, head of property project management at cost consultancy Faithful + Gould. As schemes get larger, clients are realising that the traditional contracting arrangements won’t cut it, and the delivery partner model used most famously on London’s Olympic building projects will become more common on major mixed-use schemes.

“The more easily you can break a scheme down into manageable parts the more efficient, in management terms and cost, it will be,” Speight says. “There are only a limited number of contractors who can do the £100m-plus schemes and they’re all busy. If you can break the scheme down you can award contracts to smaller firms.”

Whoever ends up building it, they’ll need a much longer lead time, says Allan Henshall, projects director at Balfour Beatty, which is managing the £110m development in the east side of the Liverpool One scheme. Balfour Beatty began its tendering process in June 2006 but Henshall wished he’d started earlier. “That’s the biggest lesson we’ve learned. We attempted to start too quickly and we’ve constantly been chasing information. It’s certainly been a challenge. There are so many interested parties to deal with. The architects, the planners, the conservation officers, English Heritage and many more. We’ve got the oldest listed warehouses in the centre of Liverpool to redevelop, we’ve got buildings in the conservation area that are not worth a great deal but take up a lot of time.”

Another reason to start planning early is to take advantage of innovation in construction techniques that can minimise disruption in tight city centre sites. Capital Shopping Centres is redeveloping the Westgate shopping centre in the heart of Oxford, and construction director Martin Ellis says it’s using more off-site technologies to offset the extra costs of the complexity. “In-town can be challenging from a logistical point of view, and that can increase costs. If you use modularisation then the quality goes up because you can make it in a factory and then put it on site. It’s done off site, taken off the lorry and bolted straight in. There’s less disruption that way, fewer lorry movements. You have to think through these things in the very early stages.”

Planning is indeed the key, according to Speight, when it comes to the all-important consideration of cost. He reckons mixed-use schemes need cost no more if they are thought through to start with. “We’ve been conducting comparisons of a single mixed-use building and development of many buildings on an open plot,” says Speight. “From a cost perspective, and if designed properly, there’s no reason why the cost involved should be any different.”

Think about how the building will be used, he advises. For example: “There’s no reason why fire escapes cannot be common between the retail and the residential elements of a scheme. If the developer can avoid too many transfer slabs in a scheme the better the cost efficiencies will be.” Likewise, access to roof space or public space can be shared by all the different users of the development, which saves on costs.

In fact, Speight thinks that, if done correctly an in-town mixed-use scheme can even be cheaper than a development on a wide open plot. “Why? Well, often because all those involved in these complex schemes have to think a great deal harder about the options open to them and that often results in a far more cost-effective plan.”

Terry Davenport is a director at BDP and led the design team on Grosvenor’s Liverpool One development. He shares his thoughts on how to go about masterplanning such a complex scheme.

With this number of components, it’s vital that the masterplan is exhaustive and will stand up to scrutiny.

You have to establish roles. We had a series of concept designers working from the plan briefs and then a select number on the executive design team.

On some buildings, BDP developed concept designs to make sure they were in the spirit of the masterplan document.

As well as regular team meetings, we brought the different packages together at different stages on the project, and once a year we had a major gathering for all the people involved.

As with every scheme you start with the site analysis. But you’re thinking in terms of whole city quarters, and each quarter has its own brief.

At Liverpool One, it’s about respecting the scale of the existing buildings. So you pick up on key vistas as you make your way through, like the Liver Building and the Albert Dock.

You’ll often have several layers of shops and below it a layer of parking, and interfaces with at least half-a-dozen buildings. You’ve got to have a holistic view.