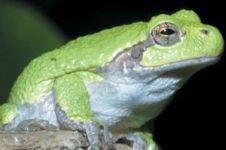 Construction of an underground crossing for frogs in a national park in Belarus has begun, media reports say.

The “frog tunnel” is part of the reconstruction of a road that links the Belovezhskaya Pushcha national park and the city of Brest, on the Polish border. It is hoped that the three tubes, set 50 metres apart, will facilitate safe passage for toads and frogs, which are often killed on the road by vehicles.

The project is the second of its kind in Belarus. The first frog tunnel was constructed in 2006, about 150km north of the capital Minsk.