David Adjaye has released images of a 30ft-tall community “art wall” in New Jersey that is intended to reduce the impact of a massive electrical switching station.

Fourteen local and international artists were invited to create works for the 1,790ft-long wall which wraps around the Fairmont Heights Switching Station in Newark. These explore themes of youth, education and community history.

The $25m project includes a colonnade formed from 34ft columns that taper upwards into 49 weighted canopy tops that can support overhead art installations.

Once landscaping is complete the passageway will house a market, temporary artworks and informal meeting spaces.

The 48,000sq ft protective wall is made from curved, perforated aluminium and corrugated pre-cast concrete and contains niches at different levels to display permanent art works.

Adjaye, who is designing a National Holocaust Memorial in the shadow of the Houses of Parliament, said: “neMy hope is that it might serve as a model for integrating meaningful public programs into even the most utilitarian urban developments.”

The project is a $277m investment by the Public Service Electric and Gas Company in Newark’s critical electric infrastructure. The station, which became fully operational in March, is due to be completed this summer when the final landscaping is installed. 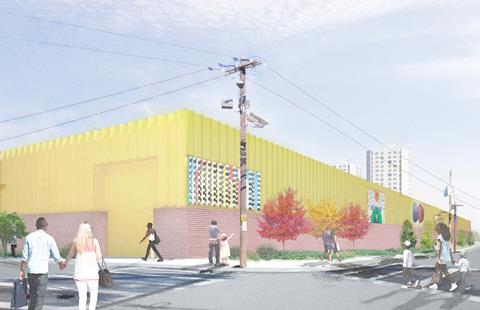 The wall runs around the sub-station