Will Alsop, Paul Finch and Roger Zogolovitch lead procession up Regent Street to celebrate the work of John Nash 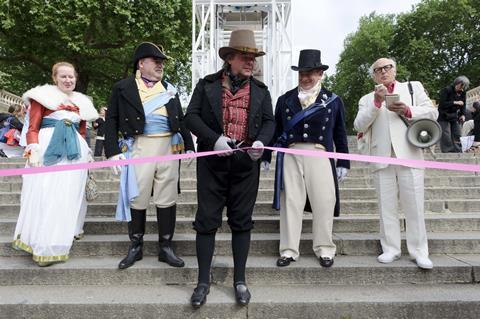 Will Alsop cutting the ribbon at the LFA launch

Will Alsop, dressed as John Nash, opened the the London Festival of Architecture on Saturday by cutting the ribbon at the world’s first water and solar powered wheelchair lift.

The lift, on the Duke of York Steps leading down to the Mall, will remain on site until the end of the festival.

Alsop was accompanied by regal reincarnates Paul Finch, chair of CABE, as the Grand of Duke of York, developer Roger Zogolovitch as the Prince Regent and Philippa Stockley as Caroline of Brunswick.

They then led a procession up Regent Street in a horse drawn cart to lay a wreath at the bust of John Nash before Paul Finch, still dressed as the Grand old Duke of York, marched to the top of Primrose Hill.

In the afternoon Alsop, in modern dress, painted a live Nash inspired mural onto one of the large windows of the Sofitel Hotel in St James.