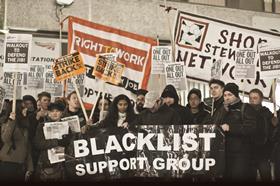 Union Ucatt has hit out at firms involved in preparing a compensation scheme for workers caught up in construction blacklisting after it emerged the firms had used a court order to obtain details of blacklisted workers from the information watchdog.

The Information Commissioner’s Office (ICO) today confirmed it had received a court order to hand over the database of 3,213 construction workers and environmental activists used by 44 construction companies to vet new recruits, which it seized in 2009 from infamous blacklisting organisation the Consulting Association (TCA).

The ICO said it had only handed over the information that it seized in 2009 - and not any updated addresses or details it had obtained since then through its efforts to identify and contact individuals on the TCA database.

The ICO confirmed the court order had come from a solicitor acting on behalf of the Construction Workers Compensation Scheme (CWCS), which was established last year by eight firms linked to blacklisting through TCA - Balfour Beatty, Carillion, Costain, Kier, Laing O’Rourke, Sir Robert McAlpine, Skanska UK and Vinci - in a bid to resolve the ongoing dispute.

In a statement today the CWCS said it had obtained the database from the ICO so that it could contact individuals on the blacklist to notify them about the compensation scheme, which it said it hoped to launch “in the near future”.

However, union Ucatt reacted angrily to the revelation that the construction firms had obtained the database of workers, saying it paved the way for the firms to unilaterally launch the compensation scheme.

Ucatt said it understood that the CWCS was set to launch its scheme as early as this month, without the agreement of unions or representatives of the blacklisted workers.

A CWCS spokesperson denied this, saying the firms involved in the scheme remained “absolutely committed to trying to find a mutually agreeable position” and that they “remained in consultation” with unions and workers representatives over the scheme.

Last month a wide-ranging report on the blacklisting scandal by MPs on the Scottish Affairs Select Committee, who have been investigating the matter, said the CWCS must not unilaterally launch its compensation scheme without coming to an agreement with unions and the representatives of the blacklisted workers.

Unions and the Blacklist Support Group, which represents workers who have suffered blacklisting, have been highly critical of the CWCS, saying that the levels of compensation offered under it are inadequate, with talks over the scheme stalling earlier this year.

The scheme’s suggestion that some blacklisted individuals could receive as little as  £1,000 and its demand that workers withdraw existing legal claims as a condition of entering the scheme have been fiercely resisted by blacklist campaigners. Firms linked to TCA are facing four claims in the High Court on behalf of blacklisted workers.

Steve Murphy, general secretary of Ucatt, said: “I can’t believe the arrogance of the blacklisting companies. They are intent on ignoring the will of parliament and launching a counterfeit compensation scheme.

“They are just interested in their own PR. Their scheme will in no way recompense blacklisted workers who had their lives and the lives of their families destroyed by these companies.”

In a statement the CWCS said: “The Construction Workers Compensation Scheme (TCWCS) is still in a period of consultation with the unions and workers’ representatives as all parties seek to reach agreement on some outstanding details.

“We believe that in the interest of maintaining a constructive dialogue, the precise nature of these discussions should be confidential at the moment and so we will not be commenting in detail at this time.

“We are hopeful that our discussions will reach a conclusion in the very near future so we can open the scheme to workers – and start providing compensation - as soon as possible.

“We have always stated that when the scheme launches, we will be publicising it as widely as possible.

“We understand that the ICO has recently been able to source current addresses for many individuals whose names may have been on TCA records.

“CWCS does not currently have those contact details.  We know that the ICO has already written to these individuals informing them that a compensation scheme was being developed; when the scheme launches it is our intention that the independent scheme administrator follows up on that letter to inform those individuals that the scheme is open to applicants.

“The contact details will be used for no purpose other than the administration of the scheme.”

An ICO spokesperson said: “We received a court order that required our office to provide copies of the information seized from TCA. The order was complied with.”

The Blacklist Support Group said: “From the start, the entire scheme has been little more than a big PR stunt.

“The supposed offer by the companies is an insult to the workers whose lives they have ruined over decades.

“Blacklisting is a major human rights conspiracy that is likely to result in the firms being banned from future publicly funded contracts until such time that they come clean.”