Mace previously worked on covid-delayed scheme, now due to finish a year later than planned

Arcadis has been appointed to the project and cost manager roles on a half-built cancer research centre in Manchester.

The new 25,000m2 building is already under construction, with a Vinci-led team building the £150m facility on the site of the Paterson building, which suffered fire damage in April 2017. 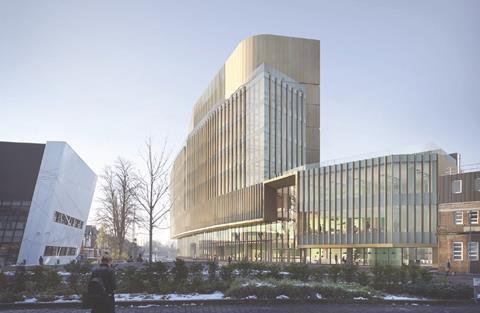 The 10-storey project is a partnership between The Christie NHS Foundation Trust, the University of Manchester and Cancer Research UK.

Mace carried out the original phase of consultancy work on the project.

A spokesperson for the trust said: “As is standard practice with a project such as this, the original appointment for project and cost management was on a stage basis.

“Mace completed the initial stage. Arcadis has been appointed for the next stage of the project.”

It is part of a wider cancer research and service campus that includes clinical facilities and the Foster + Partners-designed Maggie’s Centre and will be fully operational in early 2023.

The new research centre, which was designed by BDP, will bring together the largest concentration of specialist scientists, researchers, doctors and nurses in Europe and enable them to collaborate on research and care for cancer patients.

While IHP is a joint venture between Sir Robert McAlpine and Vinci, the latter is the only firm working on the Christie building.

It received planning permission in September 2019, while other firms on the project team include Arup, WSP and Turley.