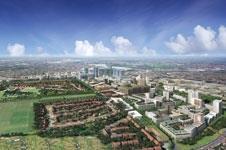 The 78ha site, which forms part of the wider Brent Cross Cricklewood regeneration masterplan, is earmarked for 15m ft2 of new development, including 7,500 new homes.

Cricklewood Brent Cross is one of London’s major regeneration schemes and is among the most significant planned new developments in Europe.

Barnet Council leader Richard Cornelius said the authority was looking for a long-term partner to create a thriving town centre that would capitalise on a transformed shopping centre being delivered by Hammerson and Standard Life Investments.

“We want to create a real model for a 21st century suburb at Brent Cross - a neighbourhood not a dormitory,” he said.

Cornelius said Argent had shown its mettle with its schemes at Kings Cross and Birmingham’s Brindleyplace.

The choice of the Argent JV is expected to be approved by the council on Tuesday next week. The Gateway Barnet consortium is the council’s reserve choice.

When Barnet announced its Brent Cross South shortlist last year it said more than £400m would be invested in transport infrastructure including new roads, increased capacity at key junctions and the creation of a new, additional station on the Midland Mainline and Thameslink lines.

It said “rapid and efficient” links would be created between Cricklewood Station and the new rail station, along a new High Street to the enhanced Brent Cross shopping Centre and through to Brent Cross tube station, representing a step change in the public-transport accessibility.