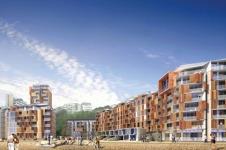 Architect Aukett Fitzroy Robinson has dropped £1.2m into the red for the six months to 31 March due to the depressed UK property market and the economic malaise in the Middle East.

The company was also hit by restructuring costs of £945,000 that included staff cuts that will see the company reduce headcount by 36%.

Despite the gloomy news chief executive Nicholas Thompson was confident about the long-term future.

He said: “At this moment we see no firm evidence of any upturn and therefore in the short term management attention will focus on the continuing need to lower our cost base to reflect current trading activity. In the longer term, when markets recover, we will revert to our corporate objective to increase revenues to £25m."

It said the economic problems in the Middle East had reduced revenue by £585,000 as a result of renegotiated or delayed fees. It was also hit by £120,000 in staff costs after a project in the region that had been won in February was withdrawn.