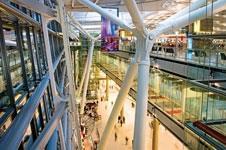 The forced sell-off of BAA's UK airports has been put on hold after the airport operator won an appeal against the Competition Commission.

The Competition Appeal Tribunal said that the order by the Competition Commission to sell three of BAA's seven airports was affected by "apparent bias" on the six-strong ruling panel.

It said that it would allow more time to hear arguments from BAA and the competition watchdog about whether the operator should have to sell the airports.

In March, the Competition Commission ruled that BAA must sell Gatwick, Stansted and either Edinburgh or Glasgow airports within two years. BAA has already sold Gatwick.

A spokesman for the commission said it was reviewing the ruling and was planning to make further submissions to the tribunal, adding that the judge had made the ruling with "the greatest reluctance".

BAA made the appeal because it believed there were links between a member of the commission panel, Professor Peter Moizer, and an organisation interested in buying the airports.

Moizer was a long-standing fee-paid adviser to the Greater Manchester Pension Fund, which had links with Manchester Airport Group.

The fund is governed by the 10 local authorities of Greater Manchester, which the shares in Manchester Airport Group (MAG). MAG is a potential buyer for the airports BAA was told to sell, and it participated in the commission's investigation.