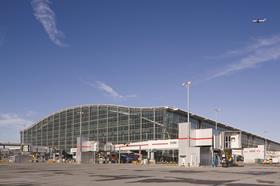 Balfour Beatty’s banks could yet present a hurdle to the sale of Parsons Brinckerhoff to WSP for £820m because the sale would reduce the UK contracting giant’s earnings potential, analysts have warned.

Balfour Beatty and WSP last week announced they had reached a deal for the sale of Balfour’s consulting arm for US$1.4bn (£820m).

The deal, which is still subject to approval by Balfour’s shareholders and regulatory authorities, represents a major acquisition for WSP (see story below and illustration, right), with the £1.1bn-turnover Canadian-based consultant expanding from 17,500 employees to around 31,000, with pro-forma revenue of CAN$3.8bn (£2.12bn).

Balfour Beatty announced its intention to sell Parsons in May, following a series of profit warnings largely due to troubles in its UK construction business, with the firm refocusing on its UK and US construction businesses. The move was widely seen as an abandonment of Balfour’s long-term strategy of diversifying into a global construction and professional services company.

The sale of Parsons, which is expected to complete before the end of the year, followed weeks of merger talks between Balfour Beatty and Carillion, which eventually broke down last month over Carillion’s insistence that the consultant be included within the merged entity.

The sale price, which includes about £67m to be retained by Parsons, is higher than the £580m-£650m valuation put on the business by analysts and represents a solid return for Balfour which acquired Parsons for around £380m in September 2009.

Balfour Beatty said it would return up to £200m of the proceeds of the sale to shareholders, as well as  £85m into its pension fund, with a further £80m taken up by taxes and costs.

This leaves Balfour, which expects to have an average net debt of £450m in 2014, with around £388m to strengthen its balance sheet.

But Stephen Rawlinson, analyst at Whitman Howard, said Balfour Beatty’s banks could yet take some convincing to agree to the sale because the move would reduce Balfour’s operating earnings by around £60m this year, while the firm’s construction business – which posted a £69m operating loss in the first half of 2014 - continued to struggle.

He said: “Balfour Beatty has to get the approval of its shareholders and its banks. The former might be easy but the latter might be tough […] The banks will want to see solid proof that the UK [construction business] is back on track.”

While he said repositioning the firm as a US and UK based construction and investment company had “logic” he said “the question is whether what remains is attractive”.

Andrew Gibb, analyst at Investec, said Balfour Beatty would need to undertake a major refinancing in 2016, when its facilities are up for renewal.

When asked if he thought the banks might oppose the sale of Parsons, he said: “Whether the banks are comfortable with the current level of facility on a pure construction business we don’t know.”

But Kevin Cammack, analyst at Cenkos, said there was “no way” Balfour would have been able to make public statements about how much it would return to shareholders without the “tacit approval” of its banks and therefore he doubted there would be any issues. 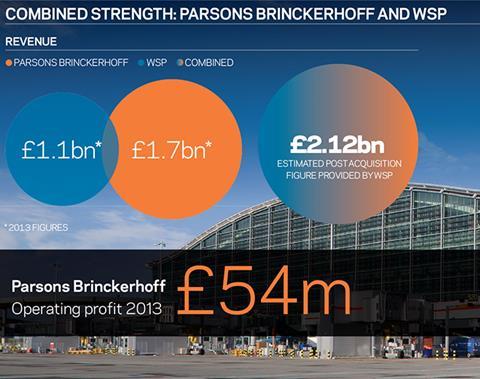 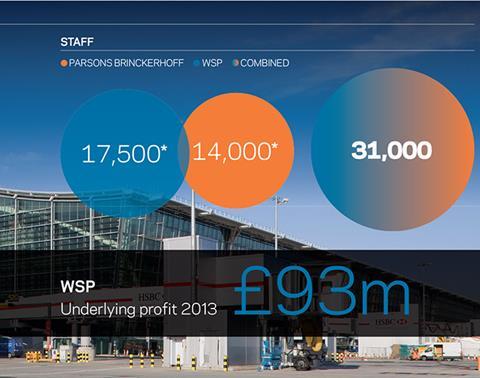 Consultant WSP is still looking for further firms to acquire despite announcing the £820m purchase of Parsons Brinckerhoff from Balfour Beatty last week.

The Canadian-based firm plans to pay £820m to buy Parsons Brinckerhoff from Balfour Beatty, financing the transaction with a mixture of cash from CAN$1.6bn (£952m) bank finance and CAN$903m (£503m) of newly issued subscription receipts.

It is a major deal for WSP and will substantially expand its geographical and sectorial reach, making it one of the world’s biggest construction consultants.

He said: “We wanted to come out of this deal with a balance sheet that still has some room. I’m not discounting any additional merger and acquisition opportunities.”

Shoiry said the firm was currently looking at acquisition opportunities in the Nordic countries and Canada to build capacity in specialist fields, such as geological engineering.

Rawlinson said the sale should allow Balfour Beatty to reduce its net debt, which stood at £364m at the end of June 2014, as well as its £434m pension deficit.
“The sale should allow some inroads to be made on those liabilities. Companies rarely shrink to greatness but the scale of the issues at Balfour Beatty means it needs to take a step back to leap forward,” he said. “Rarely will we see the sale of a group’s most profitable subsidiary be greeted so well.”

Cammack said that, on balance, Balfour had received a “strong price” for Parsons, with the £820m almost twice what it paid for the consultant in 2009. He said the price was around £120m more than recently flagged by the firm and around £200m more than initially speculated. However, he said that the “net benefit is not quite so rosy”, as after the removal of £67m to be held by Parsons, along with £80m in tax and costs, the net proceed to Balfour is around £675m.

“On balance, yes Balfour Beatty has got a strong price for Parsons […] but the net outcome and disbursements are broadly as previously indicated,” he said.

Kuglitsch said the valuation of Parsons was “reasonable” and the sale a “positive development” for Balfour Beatty.

“However, more challenging steps are still ahead: the successful turnaround of the UK construction arm and recruitment of a new CEO that can deliver this are key for the investment case of the shares,” he added.