Balfour Beatty and Atkins have been given the green light to carry out major improvements and alterations to a motorway interchange.

Grant Shapps has now given approval for the £250m scheme to revamp the M25/A3 interchange Wisley interchange near Woking in Surrey. The tranpsort secretary had  delayed his decision for 15 months to consider environmental impacts. 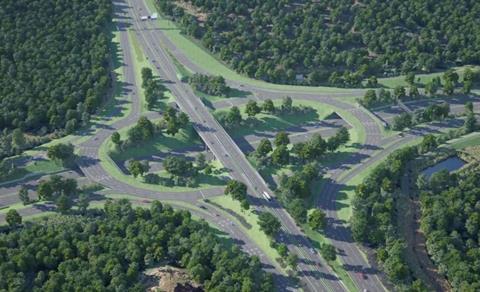 How the re-modelled Wisley interchange will look

Under the scheme, four new slip lanes will be built to “enable all left turning traffic to pass through the junction unimpeded by traffic signals”. The project also involves altering and upgrading the existing roundabout at junction 10 of the M25, elongating and widening sections of the A3 and A245.

The junction has been described by Highways England as one of its “busiest” in the UK with 300,000 journeys through it every day.

A spokesperson for Highways England said: “Due to the volume of traffic and the resulting queues, the junction and the surrounding roads have a high number of incidents.

“Our proposals will deliver much needed additional capacity, better connectivity for people and businesses, and safer journeys for everyone

The scheme attracted controversy over loss of trees and damage to wildlife, whcih contributed to a delay in the approval of the Development Consent Order, originally expected in January 2021.

However, Shapps has now decided the benefits of the scheme, along with mitigations put forward, outweigh the negatives.