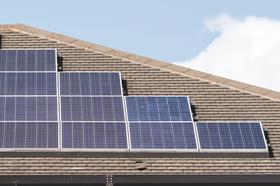 The division’s interim managing director Reid Cunningham said the division - which launched last month and is named Bam Energy – will initially work alongside Bam’s facilities management business to advise its clients on installing renewables and improving their energy efficiency.

Bam Energy is targeting securing £1m of work during 2016 and will work on Bam’s projects in the public sector and commercial sector, helping clients design and fund renewable energy improvements.

Explaining Bam Energy’s business model, Cunningham said: “Some of the first items to get struck off the list on a project are renewables.

“For example, the client might target BREEAM excellent but doesn’t have the money and will have to go for BREEAM very good. What Bam Energy does is take away the cost [of renewables].

Even with the cuts to [green initiatives], the schemes can still be economic

“If a client wants to put solar panels on the roof but can’t afford it, Bam Energy will install the panels free of charge and then the client will buy the electricity we generate afterwards.

“They are effectively paying for it from their revenue budget rather than their capital budget.”

Cunningham insisted that despite recent changes to government policy in renewables and energy efficiency - which he said is “changing so much it’s laughable” - the new business can still be profitable.

He said: “Even with the government cutting the feed-in tariff and the renewable heat incentive, the schemes can still be economic. For the medium-sized schemes they can be economical.”

Bam Energy will cover the cost of installing renewable energy for clients on its current projects, but Cunningham said he is in talks with mainstream banks and other third parties to help fund future schemes.

Cunningham said Bam Energy will only work on Bam projects “for the time being”.