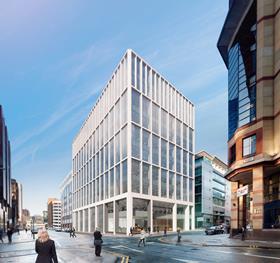 Bowmer & Kirkland has been appointed to a £23m deal to build a speculative office scheme in the middle of Glasgow that has been on the blocks for more than five years.

Plans for the scheme (pictured) at Cadogan Street were submitted by local architect Cooper Cromer at the beginning of 2014 with the city council giving it the green light later that year.

The plot, which was previously occupied by the city council, was sold off by Titan Investors with new developer, London firm Fore Partnership, promising the 10-storey scheme, called Cadworks, will be completed by summer 2021.