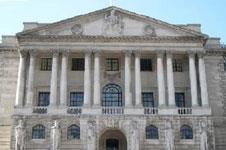 Governor predicts several years of economic hardship for the UK

The governor of the Bank of England has warned that the UK is on the brink of a recession.

In a frank speech to business leaders in Leeds last night, Mervyn King predicted house prices would continue to fall and that economic hardship would last for several years.

He is the first economic policy maker in the UK to warn of such an outcome, though data due to be published on Friday is expected to show that Britain's economy shrank in the third quarter of 2008.

King's announcement has also been reinforced by the findings of a think tank. The National Institute of Economic and Social Research said that the UK is on the brink of its first full year of recession since 1991, and will “suffer the worst setback among the G7 countries”.

According to King, earlier this month, the UK banking system came closer to collapse than at any time since the start of the First World War.

He did add a positive note, however, saying that history would judge the government's £37m banking recapitalisation as a turning point in the economic slump.

King warned that the “age of innocence” of cheap lending between banks could never return, but said the government's rescue package would lead to a gradual resumption of normal lending.