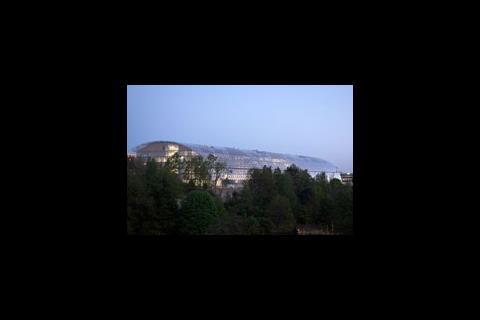 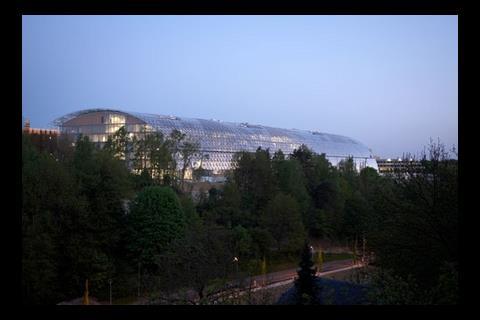 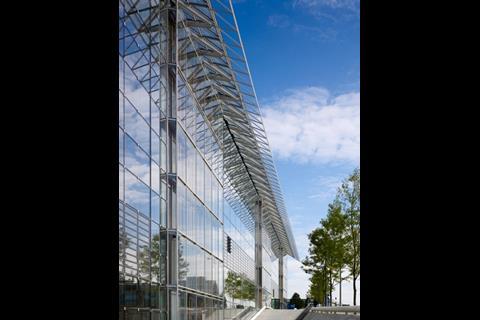 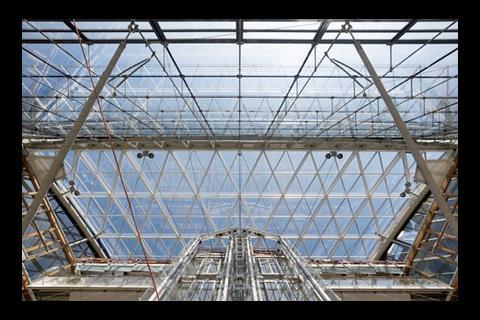 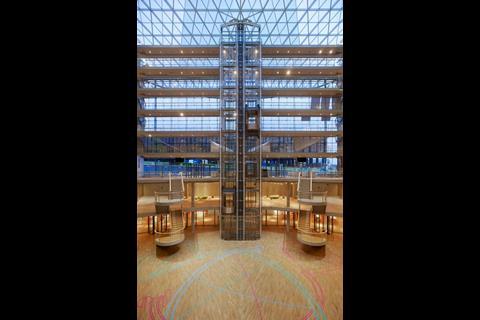 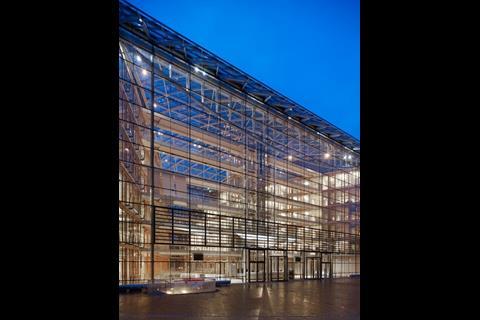 Ingenhoven extension to Sir Denys Lasdun’s original building boasts a dramatic 13,000m² roof that is key to its sustainability

Like most banks, the European Investment Bank has had its share of news coverage recently. However, global economic meltdown aside, staff at the firm's Luxembourg headquarters have been busy moving into a new sustainable office.

Designed by Ingenhoven Architects, the addition to the HQ complex is an extension to the original building designed by Sir Denys Lasdun.

Completed in 1981, Lasdun’s building on the Kirchberg plateau was originally intended to house only 800 staff. It had to be extended in 1993 to house an additional 300 employees, but with staff predicted to reach 1,850 by 2010, an international architectural competition was held for the design of a new building next to the existing premises. Ingenhoven was declared winner in 2002 and the building started on site in July 2004.

The architect claims EIB to be the first building on mainland Europe to have been assessed under BREEAM. In addition to office facilities, the new EIB building houses meeting rooms, dining areas, kitchens and a new underground cafeteria, which opens onto a sunken courtyard. It provides 72,500m² of office space and other facilities for up to 750 employees, as well as central facilities for the entire campus. The cafeteria links the new building with the existing headquarters. And, it boasts a dramatic 13,000m² glass roof.

The striking tubular glass roof spans the entire 170m long by 50m wide building. Framed in a lightweight steel superstructure, it offers a maximum of daylight and transparency and is key to the building’s environmental concept, as it curves around the office floor plates.

V-shaped atriums are formed in gaps between office floors. Landscaped winter gardens towards the north side of the building are unheated and act as climate buffers. They reduce variations between the outside temperature and the desired temperature in the offices, thereby contributing to lowering heating requirements in winter and cooling requirements in summer.

In contrast, the atriums on the southern ‘boulevard’ side of the building contain bridges, lifts and stairs providing all vertical and horizontal circulation between the building wings. The largest atrium houses the main entrance to the building and so temperatures in these areas have to be kept at a comfortable level.

Both the winter gardens and ‘warm’ atriums are naturally ventilated through flaps that can open in the building’s shell, which draw fresh air into the building and reduce heat gain especially in the summer months. Cold water pipes also run through the concrete floor slabs, creating chilled ceilings in order to cool the building in summer and to regulate the building temperature between seasons. In winter and during cool periods, thermal energy from solar gain is used to heat the building, so reducing energy consumption.

The entire office space benefits from natural light and external views. Mechanical systems such as lighting, sun shading, heating, cooling and ventilation can be controlled individually. All offices are equipped with a control panel that allows building users to individually regulate blinds for sun shading, lighting and temperature.

All surfaces - walls, floors and ceilings - are also designed to make optimum use of daylight, enhance luminosity and thus contribute to a pleasant working atmosphere

Staff can open their windows onto the atriums and winter gardens or to the outside. However, what architect Christoph Ingenhoven describes as “excessively wasteful behaviour” is avoided, as individual environmental settings are reset to the most efficient levels several times a day by the central building management system.

Artificial office lighting is restricted to 300 Lux throughout the offices. However, staff can illuminate their individual work spaces with desk lamps to 500 Lux. This overall reduction in general lighting lux levels significantly reduces the building’s energy consumption.

“All surfaces - walls, floors and ceilings - are also designed to make optimum use of daylight, enhance luminosity and thus contribute to a pleasant working atmosphere,” says Ingenhoven.

Construction materials were selected in accordance with the energy used for their manufacture with materials with the least energy consumption given preference. The internal façade frames, for example, which cover a surface area of 17,600m2, are made of wood rather than aluminium because research found that the energy used in the manufacture of the wooden materials is only 2% of that which would have been expended in the manufacture of the equivalent aluminium profiles.

This environmental philosophy extended to the construction site, where the majority of materials were chosen for their small environmental impact. For example, all wood used has been certified by the FSC or the PEFC (programme for the endorsement of forest certification).

The architect and client have placed great importance on the green performance of the building. Therefore, having the new HQ environmentally certified seemed a logical conclusion. As a result, a BREEAM assessment was carried out and the building was awarded Very Good rating.

“The new EIB building is designed to an over-arching environmental philosophy,” says Ingenhoven.

“From materials to its zigzag plan, which encourages a non-hierarchical office layout and promotes interaction and communication offers flexibility; from the structural elements to organisational efficiency, which enables entire departments to be moved almost as easily as individual office areas without having to refit basic furnishings and technical services.

“The building and the office environment is carried by an environmental programme reflecting a progressive approach towards sustainability in architecture.”