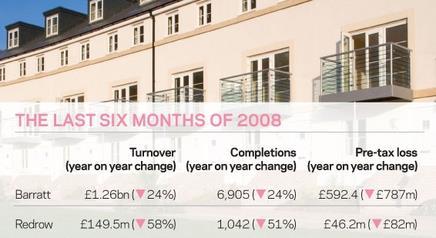 Housebuilder is confident it will not break agreements on £1.4bn debt as sales edge upwards

Barratt would only breach banking covenants in the event of “a real meltdown”, according to sources close to its refinancing talks.

The comment echoes a claim by chief executive Mark Clare as the housebuilder announced a loss of almost £600m in the six months to 31 December 2008 this week.

Clare said covenants would only be tripped on its £1.4bn debt if there was “a material step down” in market conditions similar to the collapse of Lehman Brothers.

He said: “Events like the Northern Rock collapse and the problems faced by HBOS and RBS severely constrain credit and are outside our control. It’s difficult to say they won’t happen again, but the government has taken action to prevent that.”

Although some analysts expressed concern that the spectre of a covenant breach had been raised, the source close to the talks dismissed the possibility after they were relaxed last July. “Despite ill-informed analyst comments, the covenants remain fine. They were stress-tested when they were set and it would take a real meltdown to trip them.”

The source went on to downplay the possibility of a rights issue, saying it was not needed. Clare, too, said that the company had no plans for a rights issue this year.

Meanwhile, housebuilder Redrow said it was operating well within its covenants in relation to its £269m debt pile. Alan Bowkett, its chairman, said: “We are well placed to reduce net debt to less than £225m at June 2009 and ahead of our plan to achieve our objectives for June 2009 and 2010.”

Both companies hinted at a positive start to 2009 and Barratt said sales rates per site were up 21% on 2008 levels while visitor levels were up 24%.

Neil Fitzsimmons, Redrow’s chief executive, said the start of 2009 had been “mildly encouraging” and an average of 50 net reservations per week in the past four weeks had been above the peak weeks of the autumn selling season.