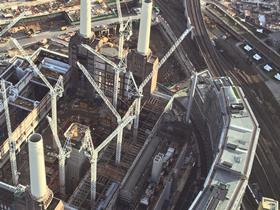 The developer behind the Battersea Power Station redevelopment has begun the snagging work on the first phase of the £9bn scheme completed by Carillion just before it collapsed in January.

The bust contractor finished the first phase work at the mixed-use site at the end of last year under a fixed-price lump sum contract.

But it is understood that the Battersea Power Station Development Company had decided not to bring in any additional main contracting expertise for the work Carillion would have done and has instead called in Turner & Townsend to manage the supply chain.

But the job was one of a number of loss-making contracts the contractor detailed in a business recovery plan published in the wake of its collapse in January.

It said it expected to lose a further £29m, including £17m this year, on the scheme by 2020, although it had earmarked £16m in claims on the scheme.

Ticknell left the developer at the beginning of this month after a decade at the firm and has been replaced by his deputy Simon Murphy.

Mace is currently on site with the second phase of the Battersea job, which includes work on the main grade II-listed structure and includes new offices which will see tech giant Apple take up space at the development, while Sir Robert McAlpine is working on the third phase which includes 1,300 homes designed by Foster + Partners and Frank Gehry.