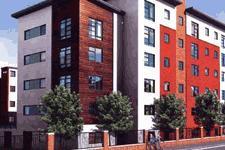 Housebuilder Bellway has reported a rise in pre- tax profit to £19m compared with a loss of £48m in the same period last year, in interim results released today.

The UK's fifth largest housebuilder by market value also reported a 13% increase in turnover from £320m to £360m.

Chairman Howard Dawe said "Bellway successfully completed the sale of 2,247 homes in the six months ended 31 January 2010, an increase of 11.6%" and "it is encouraging therefore to report an operating margin of 6.1% achieved in the period.

"The board has continued its policy of paying dividends and is particularly pleased to increase the interim dividend payment by 10% to 3.3 pence per ordinary share.

On the future outlook for the company, he added: “Whilst the market stabilised during the latter part of 2009, concerns still exist regarding unemployment, mortgage availability and the outcome of the imminent general election.

"However, with the backing of a strong balance sheet and a positive cash position today of around £72m, Bellway will be concentrating in the coming months on land acquisition and selectively increasing work in progress, with a particular emphasis on the southern divisions where the market appears to be at a more advanced stage of recovery.

"These actions should assist in returning the operating margin towards a more normal level and the board believes therefore that Bellway is well placed to benefit from a housing market that should gradually improve over time.”