Three in the frame for 50-storey scheme

Three contractors are in the race for a £300m deal to build a new tower in the Bishopsgate area of the City of London.

Building understands that Lendlease, Mace and Multiplex are all chasing the 50-storey scheme at 6-8 Bishopsgate which is being developed by Japanese firm Mitsubishi Estate.

Lendlease is currently on site with the nearby 150 Bishopsgate scheme, a hotel and apartments complex, while Multiplex is currently working on schemes at 100 Bishopsgate and 22 Bishopsgate – the latter which will be the tallest tower in the City coming in at 278m.

And Mace is due to wrap up work on another high-profile deal later this summer, the scheme to build Tottenham Hotspur’s new ground in north London.

Designed by Wilkinson Eyre, the tower at 6-8 Bishopsgate was originally due to be 40 storeys but was extended by a further 10 with planning for the revised scheme being given last October.

The office-led tower retains its stepped concept and a public viewing gallery in a rooftop pavilion with the new floors adding an extra 120,000 sq ft of office space.

Stanhope is development manager on the scheme for Mitsubishi Estate, while Arup is the structural and services engineer and Alinea the cost consultant. 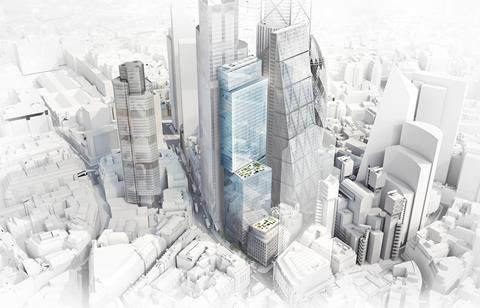