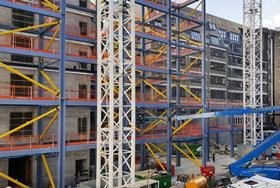 Billington has reported a hike in turnover and profit as it told investors an expected sale of British Steel and a limited exposure to problem builders meant it was on a sure footing for the future.

“We hope to be able to get somewhat closer to the margin level achieved 2018 – there will be some progression from that 5.7% onwards, we will see where we can get to for the full year,” said Trevor Taylor, Billington’s finance director.

Mark Smith, chief executive of Billington, noted that there is a “mixed environment” for tier one builders, but said the group has “limited exposure to the more troubled larger contractors”.

In April, the firm told Building it also avoided poor payers, adding that it tended to work with firms such as Wates, Sir Robert McAlpine and ISG.

The group also said it had won two contracts with a combined value of £30m in June, meaning production can remain at a similar level.

And it said it expected steel prices to stabilise if the UK’s largest steel mill, British Steel, is revived by a new owner.

A sale of British Steel is expected to take place next month, with Turkish investment firm Ataer Holdings the favourite to buy it out of compulsory liquidation.

But while the steel mill has continued to trade under the direction of the Official Receiver, Billington has bought more steel from Arcelor Mittal in 2019.

“At the beginning we feared British Steel would not be sold, [and] then obviously the supply of steel into the UK would change,” he added.

“You would be forgiven for thinking the dominant player exporting into UK – Arcelor Mittal – would have the whip hand, however certain other European and world manufacturers would soon supply into the UK.”

But Smith added that the expected sale of British Land, combined with falling global iron prices, meant he now thought steel prices would be more settled.