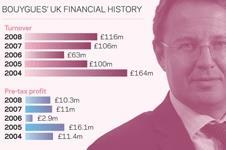 Ian Gunter, head of business development, said: “It’s the most likely sector for us to buy another company in and we’d like to do a deal this year. It’s not our core expertise at the moment but we have the relevant skills in our French head office to match up with any deal we do here.“

Pre-tax profit fell 7% from £11m to £10.2m, which the company attributed to higher bid costs as it pushed to win more work in the UK.

Margins are also thought to have come under more pressure as a result of the recession, a trend that has been seen across the sector.

Building Schools for the Future work will continue to form the core of the UK business and Gunter said its 50% contribution to turnover in 2008 would hold at a similar level in 2009.

He said that social housing would be the “big push” in 2009 and that the longer-term plan was to achieve an even turnover split between education, health, social housing and property development. He said: “With unemployment rising, the social housing sector will arguably have more pressure on it.”

Lionel Christolomme, managing director, said: “The company is continuing to make significant investments in the long-term development of the UK business and turnover is likely to double to more than £200m in 2009.”