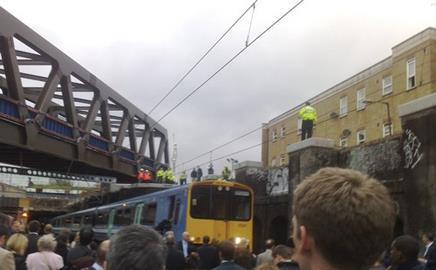 Work on a bridge being built by a Balfour Beatty and Carillion consortium at London’s Liverpool Street station, which was the centre of an accident last week, will remain suspended for at least a fortnight.

The accident occurred during rush hour on Wednesday evening when one of the jacks lifting the 1,800-tonne steel bridge into place gave way, causing the bridge to drop 200mm and debris to fall onto the track below. This was then hit by a train, forcing 300 passengers to walk along the tracks to reach a station.

A TfL spokesperson said this week that although the organisation and its contractors expected to complete their investigation by today it was likely to be “weeks rather than days” until it could satisfy Network Rail that it had rectified any problems.

He added that the incident would have a “negligible” impact on the £363m East London line upgrade, of which the bridge was part. The first phase of the project is due to be completed in 2010.

The investigation is understood to be focusing on human error and equipment failure, rather than any faults in the engineering.

Fairfield-Mabey is the bridging contractor for the consortium and Scott Wilson is the consulting engineer.

Robin Gisby, Network Rail’s director of operations and customer service, said: “Passengers deserve an apology for the disruption they suffered and I want assurances that such an incident can’t and won’t happen again.”

A spokesperson for Network Rail said the company did not have concerns over the safety of any of the projects on which Balfour Beatty and Carillion were working for it directly.

The Balfour Beatty and Carillion consortium worked through last Wednesday night to clear the debris and secure the bridge before the ban on work came into effect.

A TfL spokesperson said: “We have no plans to recommence works on the bridge until we have fully reviewed this incident.”

For more images of the incident, log on to www.building.co.uk/archive