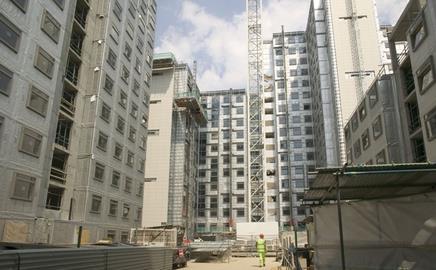 “The first is that it’s more expensive than traditional methods. The second is that it is for temporary classrooms in school playgrounds.”

While the question of cost is open to debate, the 45-year-old Geordie believes that clients are starting to forget the negative connotations of the past.

Still, off-site building has been around for almost a century, so the question is: why now?

Turnbull points to a number of factors, including the credit crunch. “The downturn has seen a lot of skills disappear,” he says. “In two years, when the market starts to recover, people will be looking for alternative solutions.”

He believes off-site is also coming into its own because the slow-burning marketing method of knocking on doors and giving presentations to wary clients is finally paying off.

“It’s reached a tipping point,” he says. “Just look at the military accommodation market – 10 years ago, off-site construction accounted for less than 5% of the sector and now it’s 75%.”

Turnbull says the prisons, hotels, health and education markets have also picked up, and that the company has only just scratched the surface of these sectors.

He believes the conversion of new clients takes about two years. “You only really know when the third or fourth order comes in,” he says. Not that the company’s production-line system allows it to spend time on one-off clients. “We can’t go round converting them – we have to find the veins of gold in the rock,” he says.

That said, modular contractors have only a 0.5% share of the construction market, but Turnbull looks at the bright side, saying: “The addressable market is massive.”

This was clearly an attraction for £700m-turnover American modular housing group Champion Enterprises, which bought £140m-turnover Caledonian for £76m in April 2006.

This was presumably a good deal for Turnbull, too – he had led a £37m management buyout of the company in November 2003, backed by private equity group Dunedin.

The credit crunch means that the speed of off-site is also attractive. Business development director Ian Kemp says: “We can build a hotel in half the time of traditional construction. This means that the owner starts to see a return far quicker and investors are exposed for shorter periods.”

This is also partly why Caledonian has no plans to enter the housing market – there is no real point in building things quicker during a downturn, as there is less demand. Conversely, there is no hurry to shift units when prices are rocketing.

That only leaves the first question. Is it off-site construction cheaper? Well, that depends, says Kemp. “Purely for build costs, the price is about 2% higher, but that doesn’t include the preliminary set-up and design costs you have with traditional construction. That pretty much knocks it back down to parity.”

Factor in a 50% cut in build time and Kemp says modular construction saves clients between 5% and 6%.

This is true only if the site is immediately occupied, of course.

Turnbull says turnover growth at his firm will be modest until 2010 but believes it will return to normal levels of 20-25% as the company comes out of the downturn, fuelled by the skills shortage and greater familiarity.

Whatever the numbers, Turnbull says the days of clients jumping up and down on modular units to test their stability are over.

Caledonian at a glance

Facilities
A 42-acre site near Newark, Nottinghamshire, and a 150,000 ft2 facility at Driffield, east Yorkshire.