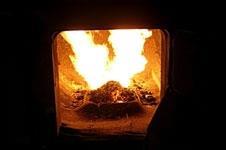 The Carbon Trust is recommending a dash for wood fuel in order to cut the carbon emissions from heating by 90%. Biomass could save an average school £50,000 a year, it said.

The government-backed, independent business called for the “massive switch” in a report, “Practical Guide,” today. But calls for a wholesale switch will likely to prove controversial.

“We have become so reliant on oil, gas and electricity that many businesses are just not aware of the cost and carbon benefits of turning to biomass for their heating supply,” said Mark Williamson, director of innovation at the Carbon Trust. “Renewable heat will need to play a key role in meeting the UK’s renewable energy targets and biomass offers the greatest potential to contribute to this.”

But despite wood fuel’s potentials, which also include improving the poor management of the UK’s woodlands, the heating method is not without its critics. Wood fuel is hard and potentially carbon-heavy to transport, tricky and bulky to store and currently lacks a developed supply chain.

Moreover, biomass boilers are prone to clogging and breakdown and cost several thousand pounds more than a conventional boiler.

“There’s a certain amount of cynicism about installing biomass to get through planning,” said Martin Taylor from energy consultancy, RYB Konsult. “As far as I know there’s no follow up after installation.”

Nonetheless, he said his firm specifies biomass in certain situations. “We’ve specified it in Croydon, but not Ealing,” he said.

Matthew Rhodes, MD of onsite renewables adviser, Encraft said that the Carbon Trust had a responsbility to give measured advice. "The closer we get to government - and the Carbon Trust are pretty close - the more important it is we get away from a magic bullet type approach."

To help allay the capital cost, the Carbon Trust issues interest-free loans of up to £200,000 to help small business upgrade to a more energy-efficient system. Payback time is less than three years, it claims.