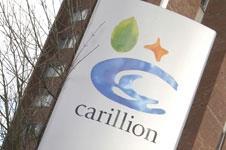 Carillion said it had around £4.8bn of new orders and probable orders in 2016 despite the slowing pace of contracts being awarded in the UK following the Brexit vote.

The firm added the ongoing slump in oil prices also continued to affect the pace of its customer’s investment programmes in the Middle East and that trading conditions in the construction market were tough in the region.

The drop in pre-tax profit was due to £55m of writedowns including costs from redundancies and restructuring relating to the company’s cost reduction programme, costs relating to a series of acquisitions - the Outland Group in 2015, Rokstad Corporation in 2014, John Laing Integrated Services Ltd in 2013, Alfred McAlpine in 2008 and Mowlem in 2006 - and an £11.9m charge over the closure of the firm’s Caribbean operations which it announced in December.

Carillion also confirmed a £10.5m cost relating to its share of the compensation and costs under The Construction Workers Compensation Scheme.

Underlying margins also fell during 2016 to 4.9% from 5.3% in 2015, which Carillion said was mainly due to reductions in margin for Public Private Partnership projects and Middle East construction services.

Carillion chairman, Philip Green, said: “In 2016, Carillion’s performance was led by revenue growth and an increased margin in support services, together with good cash flow.

“Given the size and quality of our order book and pipeline of contract opportunities, our customer-focused culture and integrated business model, we have a good platform from which to develop the business in 2017.

“We will accelerate the rebalancing of our business into markets and sectors where we can win high-quality contracts and achieve our targets for margin and cash flows, while actively managing the positions we have in challenging markets. We will also begin reducing average net borrowing by stepping up our ongoing cost reduction programmes and our focus on managing working capital.”