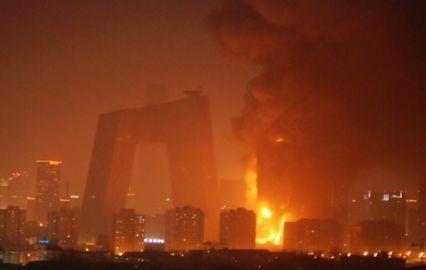 China’s state broadcaster has been blamed for the fire that gutted a signature tower designed by Rem Koolhaas yesterday.

Investigators said fireworks illegally set off by China Central Television had caused the blaze in the 44-storey TVCC tower, which was under construction in Beijing.

One firefighter was killed in the blaze and six were injured, according to state press.

The building, which housed the new Mandarin Oriental Hotel, stands a few hundred metres from the iconic CCTV tower built as part of the 2008 Olympic construction effort.

The government has said that the blaze, which started at 8.30pm and was extinguished around midnight, had “not seriously damaged” the main structure of the building.

Arup, which was the engineer on the project, said it was in contact with project partners at the scene of the fire.

In a statement Arup said: "Until the full facts emerge, we can't speculate on the causes of the fire or the extent of damage. We are in constant contact with our partners on this project, and with our people on the ground. As we learn more about this incident we will be able to advise further."

The TVCC building was due to open in mid-May and contained a hotel, a theatre and several studios.