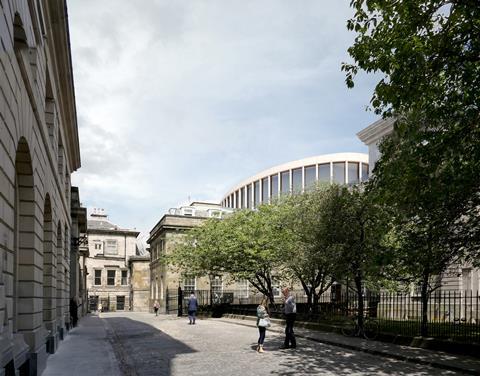 David Chipperfield Architects has admitted that it will struggle to fill vacancies at the firm once the UK leaves the EU.

In its latest report and accounts, which were signed off at the end of last month, the firm, which has designed a new £45m concert hall (pictured) in Edinburgh that will be built by Sir Robert McAlpine, said leaving the EU would hit its ability to hire staff from the bloc where around half of its 80 staff come from.

It added: “[In] leaving the EU with or without a substantive deal, the biggest risk is that relating to the employment status of current and potential future staff.

“We continue to have a stream of CVs from the EU. If this were to cease, we may struggle to fill vacancies and/or face higher wage inflation due to low supply in the market.”

The firm, which moved its London office last autumn from Waterloo to a block close to the Strand, blaming falling turnover, increased sub-consultant costs and providing for losses on future projects for sinking into the red last year.

In a note accompanying the accounts, the firm added: “The company has been working very hard to win new work to replace a number of long-term projects which completed during the year.”

And it said: “We made provisions for future losses in some projects, partly based on a higher future costs base.”

But it said that, at the time of signing off the accounts, it had secured 86% of its 2019 budget which was “significantly” higher than 2018 income.