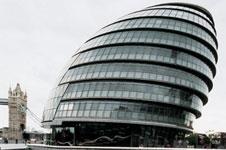 All major city authorities have plans to increase the energy efficiency of their buildings and infrastructure despite huge variations in the level of climate change preparedness between cities, a study has found.

The study by a group of scientists at Newcastle University found that 100% of local authorities in the 28 urban areas investigated planned to increase energy efficiency in their area.

Nearly all authorities had plans for reducing emissions but these varied wildly from just a 10% reduction to and 80% reduction.

Oliver Heidrich, one of the authors of the study, said: “Although cities of all sizes across the UK acknowledge climate change is a threat, there is considerable spread of measures in place and huge inconsistency in policy between areas and against national and international targets.”

London was found to have one of the most advanced strategies for dealing with climate change, which the study said was partly due to the joined up nature of planning through the Greater London Authority.

But it also found that few cities had made plans to adapt to the problems caused by climate change, such as flooding.

It also found that areas that were obliged to report their progress on climate change mitigation and adaptation were more likely to have highly advanced plans to meet the challenge of climate change. It concluded that this “highlights the important benefits that regulation and incentives can have”.