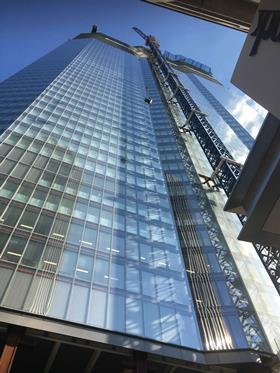 The boss of the architect behind the tallest tower going up in the City of London has said the cluster where it is being built is “over-engineered” and “congested”.

PLP chief Lee Polisano revealed the practice was initially nervous about the scale of the area’s tallest building, 22 Bishopsgate.

Polisano has at least three buildings completed or under construction in the concentration of towers in the so-called eastern cluster which the City has designated for tall buildings..

As well as the fast-emerging 62-storey giant being built by Multiplex, PLP is also responsible for the more diminutive 43-storey 150 Bishopsgate, being built by Lendlease, while Polisano worked on the Heron Tower built by Skanska for his previous practice, KPF.

“There’s no room for more,” he told Building ahead of his firm’s 10th anniversary next year. “I think it’s gone a little too far.”

He criticised the City’s policy of congregating towers in a particular area of the Square Mile – the so-called eastern cluster. “I am not so sure an engineered skyline gives you the best results,” he said.

“When we did the Heron there was a notion there was a pinnacle to them all and a series of buildings, but you can’t really engineer something like that because you can’t tell someone, ‘You can build 50 storeys on this site but only five next door’.

“You get this funny collision of different things, unless you have a real constraint like a viewing corridor.”

He said the “congestion” on the skyline of the eastern cluster was inevitable, but that if planners could demand high-quality buildings that contributed to the street “you can make something nice out of it”.

The eastern cluster is set to get bigger when work on Eric Parry’s nearby 1 Undershaft gets going. At 73 storeys, 1 Undershaft will eclipse 22 Bishopsgate as the tallest building in the City, at just under 305m tall.

The building originally being built on the 22 Bishopsgate site was called the Pinnacle and was designed by the same team but when they were at KPF. Construction ground to a halt after the 2008 financial crash. At about the same time Polisano left KPF to set up PLP, where the firm won the job of designing its replacement.

When it completes next year for developer Lipton Rogers it will be Britain’s tallest building after the Shard and he admitted: “For a while we were a bit nervous about the scale of it.”

He added: “We were never able to accurately depict the transparency of the glass in renderings. It’s a similar glass to the Shard but two generations on so it’s incredibly clear and white and reflects the sky in a beautiful way. It’s going to be very, very nice to look at.”

The building will have space for 12,000 workers and will include a host of amenities including 1,700 bike spaces and over 100 showers.