The stock market has taken its direction from the terrible events in Japan and the FTSE All Share Index has fallen by 3.6% in the last week.

The Japanese construction market is virtually locked out for UK based contractors but thoughts right now are far removed from potential opportunities resulting from the earthquake and devastating tsunami.

Rather, UK based construction firms have had a relatively dull week. Those reporting their results have seen little movement in their share prices, with Costain the exception.

After reporting pretty strong results last week, its shares have increased by 9%. This is partly because of the results (profits up 54% helps) and partly because investors are betting they will miss out on buying Mouchel.

The hedge funds, which had previously been selling short positions in Costain, are likely to have been covering these positions (buying the shares back) and turning their attention to Interserve, Mouchel’s new favourite predator.

Balfour Beatty, which also reported a solid, if uninspiring, set of numbers, has seen its share price fall in the last week. Its results were respectable but nothing to be too excited about. Consequently, its shares have drifted.

It’s a recurring theme this week too, as ISG shares have been particularly dull - virtually unchanged despite results that weren’t too bad.

This proves that while firms are hitting their profit targets, there is still uncertainty and while this prevails, investors will not get excited.

Hitting profit targets for 2010 is all well and good but 2011 is a different story. As Renew’s statement (above) suggests, cutting off some sources of revenue will have a delayed effect.

With public sector spending cuts still to kick in, it could take a couple of years until the effects hit home. Shares in the construction sector, other than those with a specific catalyst, won’t be shooting the lights out any time soon. 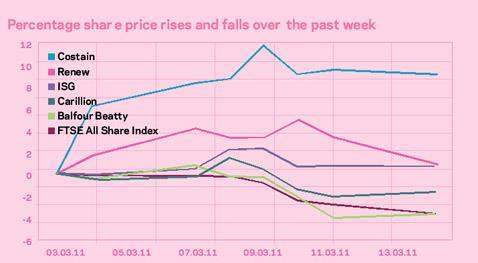